This Event has no scheduled dates at this time. It last occurred on Friday, May 7, 2021. 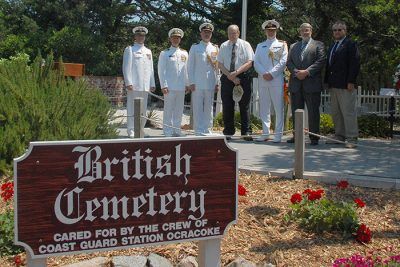 The 2019 British Cemetery ceremony is scheduled Friday, May 7, 2021 at 11a.m. This marks the 78th commemoration of the four British World War II soldiers buried in the small plot of British land along British Cemetery Road. The ceremony, organized by the War Graves Committee on Hatteras, remembers the sinking by a German U-boat of the HMT Bedfordshire, a British trawler, off the coast of Ocracoke on May 11, 1942. For six months, the U-boat brigade torpedoed allied convoys off the Outer Banks.

Representatives from the British Royal Navy and Royal Canadian Navy will be in attendance, as well as members of the United States Coast Guard, the Commonwealth War Graves Commission and students from Ocracoke School.