Oregon Inlet Fishing CenterGood Things Come to Those Who Bait

Good Things Come to Those Who Bait 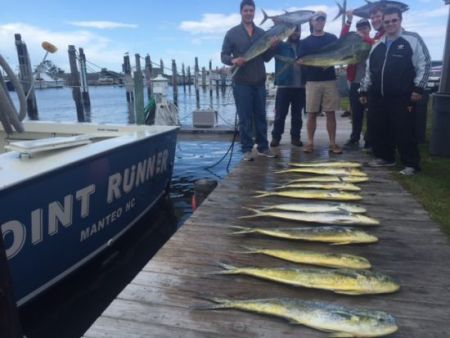 We had 27 Offshore boats fishing today. They caught a massive number of Mahi Mahi and several of those were beautiful Bull Dolphin. They also reeled in some fine Yellow Fin Tuna. Congratulations to Andrew Grove who fought and won the battle with a 400 pound Blue Marlin. We also had 2 White Marlin caught and released today, one by Ashley Poole. Our Inshore boats also had a good day of fishing. Morning and afternoon trips brought in 2 to 3 pound Bluefish, Specked Trout and Flounder. They were also catching Stripers, which were released due to the season being over. Bring your family out for a day of fun filled action; you can just watching the boats come in with their catch of the day or book your own fishing excursion with us. Call 1-800-272-5199 to book your trip today!