This Event has no scheduled dates at this time. It last occurred on Sunday, November 17, 2019. 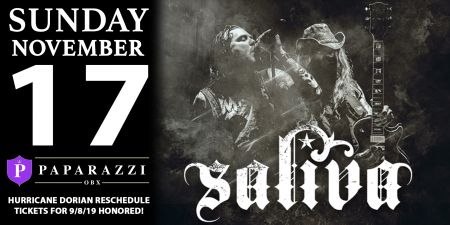 Due to the effects of Hurricane Dorian, Saliva has been rescheduled for November 17th! All tickets purchased for the September 8th show will be honored. Doors open at 7 p.m. and the show starts at 8 p.m.! Must be 21+ years of age to enter.

Saliva's 2002 “Back into Your System” album release not only put the band on the map but shot them to No. 19 on the Billboard 200 charts. Saliva's biggest hit from the album, "Always," topped the Modern Rock Chart at No. 1 and No. 51 on Billboard's Hot 100 chart. Full-throttled and full of energy, Saliva's latest single, "All Around the World," featuring new frontman Bobby Amaru, has brought some fresh blood to the band's sound and their live concert performances as well. Throw into the mix their latest hit track, “One More Night,” and the band's current tour with road mates, 12 Stones and Royal Bliss, is an explosion of fierce rock.

Saliva has toured the USA and world with bands including (but not limited to), Sevendust, Aerosmith, and KISS. They’ve also appeared on the main stage at countless fairs, festivals and bike rallies – Sturgis, Rockin The Rivers, Daytona Bike Week, Rock on the Range, Welcome to Rockville to name a few.

Saliva's roots are firmly planted in their hometown of Memphis, Tennessee, where the band originally formed in late 1996. Within the first year of forming, the band's first album, which was self-titled, was released on the Rocking Chair Records label. Since their inception, Saliva has been making waves everywhere they go. A few years after their “Survival of the Sickest” album, they released “Blood Stained Love Story,” which peaked at No. 19 on the Billboard 200 with its track, “Ladies and Gentlemen," leading the way to top out at No. 2 on Billboard's Mainstream Rock Chart. Saliva's international ticket sales touched the shores of Japan, South Korea and Europe when the band hit the road with fellow rockers Sevendust (previously mentioned above). In addition to their success in touring and the charts, the band has been a staple on Sirius Satellite Radio's “Octane 20” with songs like "Don't Question My Heart" and have crossed over to be featured on the "WWE: The Music, Vol. 8" album. They've also provided the official theme song for the ECW brand. Saliva are looking forward to seeing all of their friends and fans along with making a few new ones.

KRUNCH is a local cover/original band in the Hampton Roads area. They play high energy rock and roll and try to have as much fun as possible while doing so. Come out to a show..& tell!