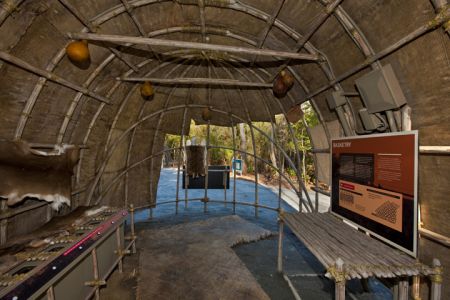 Explore Coastal Algonquin culture and history in American Indian Town, an exhibit that’s new to Roanoke Island Festival Park. The town represents an American Indian community similar to what the English explorers investigated and surveyed during their voyages to Roanoke Island and the surrounding area in the late 16th century. Visitors follow paths that wind through the natural habitat at the park. Homes, agricultural areas, and work shelters line the paths and await visitors’ discoveries. Two longhouses represent the historical homes of American Indians from the region. One of the longhouses interprets the home of a leader from the community, and stretches over 30 feet long. A smaller and partially completed longhouse includes an interactive component that invites visitors to help complete the structure and also features a Dance Circle. Both areas contain interactive exhibitory that focuses on the developing relationship between the American Indian and English peoples during the late 16th century. The exhibit has a planting and harvesting area where visitors can learn the advanced nuances of American Indian farming techniques. Three work shelters include activities like cordage (rope) making, mat and basket weaving, net mending, food preparation, tanning hides, fishing, boat building and gathering.

Where is the activity?