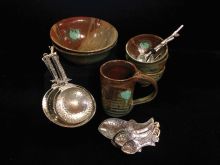 When Philip and Julie Howard set up a teepee on a piece of Philip’s parents’ Howard Street property in the summer of 1970 and began selling their handmade spoon rings and macramé necklaces, everyone thought they’d lost their minds. “Who in the world is going to come to Ocracoke and buy stuff?” Philip’s father wanted to know.

People did buy their stuff though, and soon the Howards were able to add crafts from other island artists as well. Within a couple of years they had a building instead of a teepee, and over the last 50 years their shop, Village Craftsmen, has blossomed into a beloved Ocracoke Island mainstay known for its exquisite traditional and contemporary American crafts.

Generations of shoppers return every year for the pottery and jewelry, two of Village Craftsmen’s specialties. They come for the blown glass, wood carvings, musical instruments, books, fine art and more. They come to browse among the works of many longtime artists and to see what’s new among the ever-changing inventory. They come to see Philip, who’s now officially retired but often at the store, and his daughter, Amy, who grew up in Village Craftsmen and now runs the show. 50 years in business – what a legacy!

Rent a vehicle for more than one week, receive 5% off the total rental rate.