Ahh … the beach. There is no place more restorative and rejuvenating than that magical stretch of sand where the land meets the sea.

It’s obvious that thousands of Currituck County vacationers agree. From four-wheel-driving on the sand at Carova Beach to swimming with the family at lifeguarded beaches around Whalehead Beach to enjoying their own practically private stretch of beach at Pine Island, people are out there on Currituck’s 24 miles of wide, clean, not-too-crowded beaches all summer long, relaxing, playing, swimming and making memories that will last a lifetime.

People haven’t always loved the beach. For millennia humans feared the ocean, seeing it as an unfriendly place full of scary creatures and with the power to destroy lives and property. It was the British who first began to think of the sea as a place of healing and invigoration when 18th-century doctors began prescribing sea bathing (and the drinking of sea water!) as a remedy for various maladies. By the 1860s days at the beach became more about entertainment than healing.

While now we see the beach as one big summer playground, it’s a fact of life that the ocean still deserves the respect, and maybe a little of the healthy fear, that our ancestors had for it. This time of year, lifeguards and emergency personnel all along the Outer Banks encourage ocean swimmers to remember the inherent dangers of the ocean.

In addition to vigilant public observation, Corolla Beach Rescue considers education one of the most important aspects of its lifeguards’ jobs. “A lot of our job is educating the public as a preventative measure,” says Matt Hewes of Corolla Beach Rescue. “We always say, ‘The best rescue is the one you don’t have to make.’”

That’s why Corolla’s lifeguards are encouraged to engage with beachgoers and warn them about any dangers.  It might not be the lightest of topics for summertime reading, but beach day safety is extremely important for everyone. Here’s what the Corolla Beach Rescue guards want you to know. 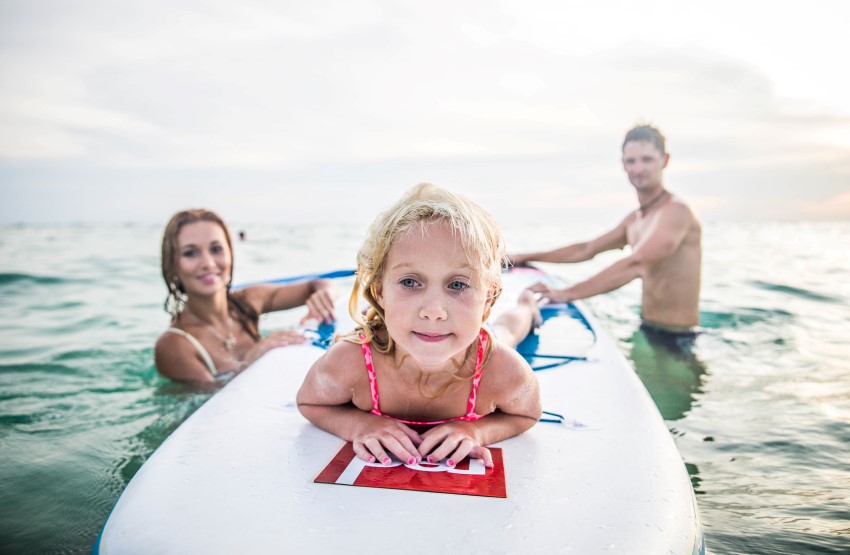 RIP CURRENTS
A rip current is a powerful, narrow channel of fast-moving water that flows from the shoreline toward the open ocean. Objects and people that get caught in a rip current will swiftly move seaward at a pace of 1 to 8 feet per second, faster than an Olympic swimmer can swim.

A few points to remember about rip currents:

SHOREBREAK
The power of the waves varies from day to day. And the force with which those waves hit the beach can vary from place to place, depending on the slope of the sand. Try to avoid areas with extreme shorebreak. “Shorebreak is extremely hazardous to bodysurfers, bodyboarders and surfers who are thrown against the sea floor, sometimes causing severe injuries including cervical spine trauma,” Matt says. “We typically see a couple of neck injuries per season from shorebreak.”

DIGGING HOLES
Another beach danger is excessive digging and piling of sand. Deep holes and tunnels can collapse, suffocating children and even adults. Holes and piles also make the beach very dangerous for emergency vehicles and unsuspecting pedestrians. For the safety of all beachgoers, don’t dig holes deeper than your knees, don’t digs tunnels through the sand large enough to crawl through and always return the beach to its original condition.

STORMS
Lightning is possible anytime you can hear thunder. As the National Weather Service says: When Thunder Roars, Go Indoors.

MARINE LIFE
The ocean is an ecosystem teeming with life. Crab pinches, sea lice skin irritations and jellyfish stings are going to happen eventually. Carry rubbing alcohol or vinegar in your beach bag to rinse jellyfish stings and sea lice rashes (don’t use water for either). Shuffle your feet as you walk in the water to scare off skates and rays.
Shark attacks are extremely unlikely, but there are some things you can do to be less attractive to sharks:

STAY CONNECTED
Mary Beth Newns, director of Currituck County Emergency Management, encourages vacationers to stay somewhat connected. “I know some people want to totally disconnect from their phones and devices when they are on vacation, but it’s important to stay aware of weather systems and to keep an eye on what’s happening in your surroundings,” she says. Newns also reminds people in Corolla to heed hurricane evacuation warnings, even if the weather is still nice before the storm hits. “Get on the road as early as possible to avoid traffic jams on Highway 12,” she says.

Beach Safety Education for Kids
In an effort to prevent open-water drowning and promote ocean safety, Corolla Lifesaving Association offers two programs for kids. SEALS is a free, two-hour ocean safety mini-camp for ages 6 to 13. It’s held on Thursdays from June 6 to August 1. Registration is at 9:30 a.m., and the camp is from 10 a.m. to noon. Jr. Guards is a four-day camp with two levels, one for ages 8 to 12 and one for ages 13 to 15. Two sessions are available each summer. Registration is required, and there is a fee. Go to corollalifesaving.org for more information.

Corolla Beach Rescue Top 10 Safety Tips:
Know how to swim.
Never swim alone.
Before you go, check the weather and beach forecasts.
Always swim near a lifeguard.
Ask the lifeguard about rip currents and hazards.
Don’t fight the current. You cannot swim directly back to shore.
If you need help, call or wave for assistance.
If you can’t escape the current, float or tread water.
If you see someone in trouble, call 911.
If in doubt, don’t go out!