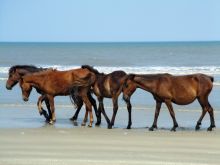 Bob’s Wild Horse Tours is a bit of a fixture on the northern Outer Banks, the first company known for pioneering the popular safari-style open air vehicle and taking people past the end of the road to the open beaches and marshes where wild Spanish Mustangs roam. The charm of interacting with wild horses in their natural environment is beguiling, and once families have been on one tour they tend to return, making Bob’s part of their family vacation tradition. But how did the man known as Corolla Bob come to be such an integral part of both visitors’ vacations and the Corolla community? For the story behind the company and the man, read on!

Born and raised in Richmond, Virginia, Bob White grew up vacationing on the northern Outer Banks. In a twist of fate that wouldn’t be realized until many years later, it was the wild mustangs of Corolla that first lured Bob’s family to the Outer Banks’ sandy shores. “My dad came here in 1983, saw the wild horses and that was it! He built a house in Corolla Light, and we’ve come down ever since.” His father would eventually move to Corolla permanently, but to the teenage version of Bob, the decision was a mysterious one. “I was 14 at the time and couldn’t figure out why my dad wanted to build a house here,” Bob says. “There were no girls and nothing to do!” While the wild beauty and isolation of the Outer Banks may not have held all that much appeal to the young Bob, fast forward 12 years and he’s packing a moving van and relocating down here too. 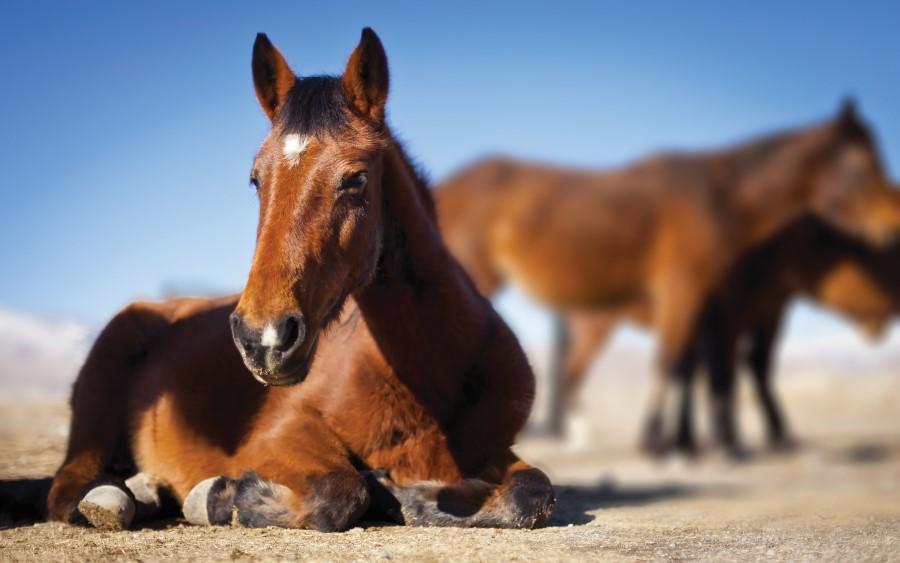 After four years as a military policeman in the Marine Corps, Bob worked for a federal reserve bank for a short time before the call of family, the beach and wild horses beckoned him to move down and join his father. His father had opened an inn in Corolla, and Bob would take on running the watersports operations and taking vacationers out on Jet ski and parasail adventures. The wild horses of Corolla had just been relocated up the beach, past road’s end to 7,455 acres fenced at the top and bottom, allowing them to roam freely without risk of vehicle accidents. During one of the inn’s margarita parties, a guest asked how people go about seeing the wild mustangs. Bob’s dad, ever intent on making sure Outer Banks visitors have a good time during their stay, offered to drive them up in his 4x4! The idea for horse tours was born, and Bob would spearhead it himself. That first customer even suggested naming the business Bob’s Wild Horse Adventure Tours; the Corolla Bob nickname would quickly follow, “though I think Margarita Bob was probably my first handle,” Bob jokes. In keeping with the tradition of a friendly drink, Bob and his wife, Wendy, recently opened a craft beer shop on the Bob’s Wild Horse Tours premises.

As the original Bob’s Horse Tours business took off and grew, Bob found he needed to modify the vehicles used for tours from a simple four-wheel-drive truck to something better suited to horse-viewing adventure. Bob built open air trucks seating up to 15 people with cab seats available with air conditioning. “It’s really amazing when you sit facing forward about eight feet up in the air,” Bob says. The trucks accommodate family members of all ages, including youngsters in car seats, allowing a horse tour to be a truly multi-generational vacation experience. There isn’t much better than cruising along the beach with the salty breeze in your hair, watching a herd of wild mustangs prance along the shore.

It was originally run out of his father’s inn, but as the success of the horse tours increased, Bob found himself in need of more space, particularly for parking. Bob and Wendy opened another company and called it Corolla Wild Horse Tours instead of confusing customers with two different Bob’s locations. A third business, initially a Jeep rental company, also morphed into guided horse tours, Back Beach Wild Horse Tours. “Somehow, I got three companies out of the deal,” Bob says. Another enterprise that established Bob and Wendy in Corolla was their Ned’s Ice Cream and Convenience shop. Bob also managed his father’s inn for 10 years while running the horse tour companies. As the horse tour businesses took off and Bob’s father retired, Bob was able to step away from managing the inn, sell the ice cream shop and focus solely on taking people to see the wild mustangs of Corolla.

The history of the mustangs is just as interesting and varied as Bob’s story. “These horses have been here for close to 500 years now,” Bob says. “They’ve been part of the Outer Banks since the first explorers.” Left behind by the area’s original Spanish settlers when conflict with the native population escalated, the horses at one time numbered near 3,000. When Bob White moved to Corolla, only 40 horses remained. Since their move up the beach, the herd has increased to around 100 horses and recently introduced a new stallion, but they’re still critically endangered. Every tour to see them helps raise awareness of the horses’ situation.

Corolla Bob’s involvement in the local community is another way he gives back to the place that he calls home. “Through my time here and running my business, I realized Corolla needed an advocate,” Bob says. “I decided to throw my name in the hat for county commissioner and won.” Bob’s role as commissioner finds him searching for ways to improve vacationers’ experiences. One of the many projects he’s worked on with other commissioners is a Corolla beautification plan, adding lots of trees and flowers near the village entrance to create a lovely first impression. “We’re always looking at ways to better the tourist experience,” Bob says. “We want them to keep coming back for generations to come.” Reinvesting in the community is a way to do just that, benefitting both residents and visitors.

As vacation family traditions go, you really can’t get much better than a wild horse tour with Corolla Bob. And when choosing a tour company, it’s nice to know that Bob’s Wild Horse Tours has an owner who is deeply invested in the history and well-being of both the wild horses and his local Outer Banks community. “When I started this I never imagined people would do more than one tour,” Bob says. “I’m humbled by how many people come back and go year after year as part of their family’s vacation. I’m now part of people’s memories they have for years!” Give them a call to experience the magic and wonder of a wild horse tour with Corolla Bob, and make it part of your family’s vacation memories too!

Enjoy a free fountain drink when you purchase a full meal at The Landing Grill.