Bottled on the Outer Banks 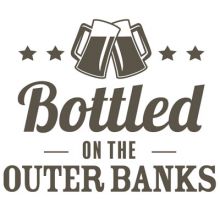 Have you ever heard the story behind the name of Kill Devil Hills? Legend has it that during the height of piracy on the Outer Banks, ships were losing their cargo to sandbars and marauders on the water, and one day the locals discovered beached barrels of rum with contents strong enough to kill the devil.

Okay, that’s just one legend, but it certainly is fun to muse about the iconic names of Outer Banks sites and, even more so, to indulge in the libations inspired by our coastal history and beautiful setting. From craft beers to fine wines to rum, Outer Banks establishments are brimming with thirst-quenching libations. Here are our favorite local craftsmen of exceptional alcohol and the drinks you should grab to enjoy with local cuisine in the late night, with friends on a pub bar stool or oceanfront during your fifth or sixth beach day of the week. 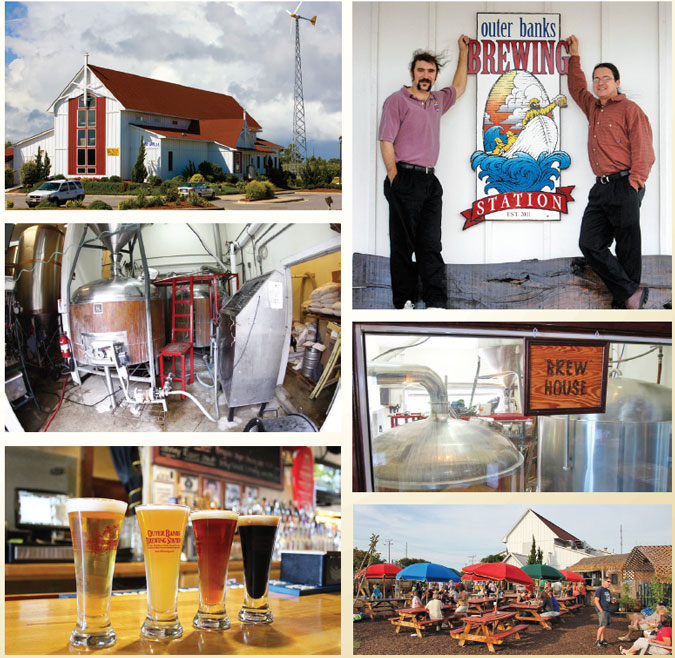 A landmark establishment on the Outer Banks since 2001, locals and visitors alike all know the Brewing Station. It might be because it’s the first wind powered brew pub in America or because the eye catching building was modeled after the famed, turn-of-the century Kill Devil Hills lifesaving station. Perhaps it’s the family friendly backyard or the lively late nights featuring local and national touring acts that draw the diverse crowd that refer to it as the Beer Church. Whatever reason people go to the Brewing Station, they keep returning for their outstanding list of constantly rotating, handcrafted brews that give patrons a new lineup of flavors each time they walk through the brewery’s doors.

The iconic brew pub was actually conceived in Thailand when owners Aubrey Davis and Eric Reece met during their time in the Peace Corps, and 10 years later the Brewing Station opened on the Outer Banks within sight of the Wright Brothers Memorial. The prominent wind turbine extends 92 feet into the sky and makes use of the near constant wind the Outer Banks is famous for. On the menu, award-winning brews take the spotlight alongside exceptional coastal fare with creations such as the Brewing Station’s flagship Kolsch style Olsch beer and refreshing Lemongrass Wheat Ale paired with Diners, Drive-Ins and Dives-featured Shrimp’n’Grits. The Brewing Station, with its big backyard, kids playground, live music, specialty drinks, beers and housemade sodas, certainly has something for everyone! 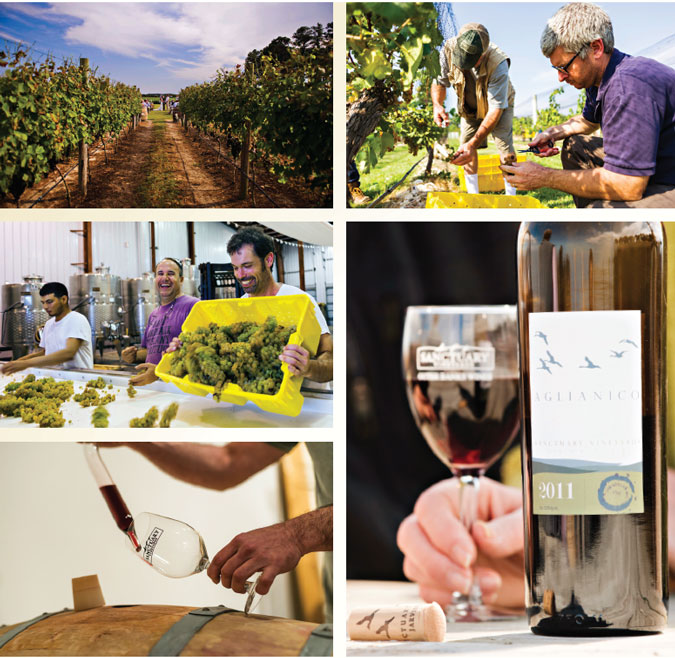 Visitors are often surprised to hear that coastal North Carolina is home to thriving vineyards and a selection of world-class wines, yet that’s exactly what they’ll find at Sanctuary Vineyards, a quaint seaside farm in Currituck County that’s home to some 25 acres of grapes. Named the North Carolina Wine Grower of the Year in 2015, Sanctuary Vineyards produces 5,000 to 10,000 cases of artisan wine each year with the focus on keeping things small so that each barrel can be attended to with care. The Wright family has been farming in southern Currituck County for seven generations, finding the coastal farmland’s conditions to be perfectly aligned for growing.

The acclaimed wines of Sanctuary Vineyards are inspired by the natural beauty of the Outer Banks as well as our fascinating history. First time visitors to the vineyards should try the Coastal Collage, a full bodied Bordeaux style blend of merlot and cabernet franc, or a summer wine like the Wild Pony White. The tasting room is open seven days a week, and throughout the year the vineyards put on a variety of events where visitors can try the wines, like weekly Acoustic Sunsets in the summer. Make sure to stop into The Cotton Gin and the brand new Thyme and Tide Café when you next visit, and grab a bottle of Sanctuary Vineyard’s newest dessert wine, Outer Banks Ice. 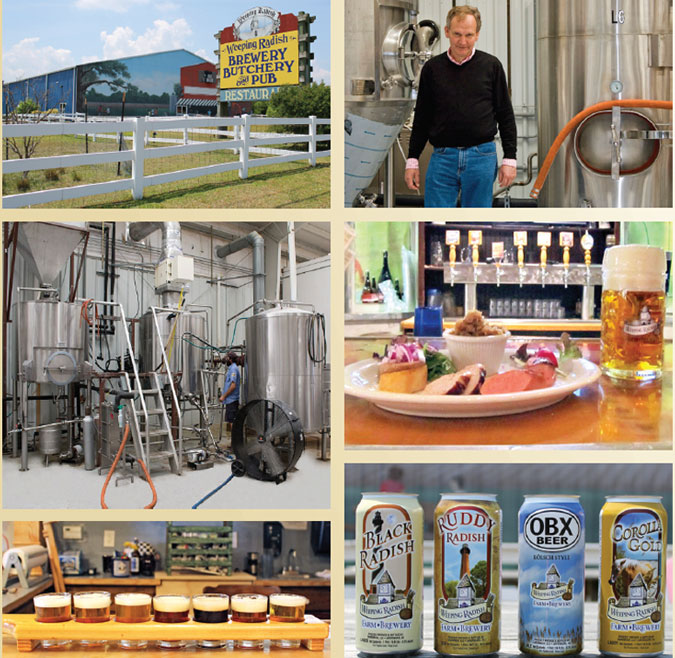 Reminiscent of the renowned microbreweries of Bavaria, Weeping Radish Farm Brewery brews in the Reinheitsgebot standard, using only traditional methods and concocting some delectable varieties that you just have to try. Brews like the Black Radish, a dark German lager with subtle roasted malt flavors, and the Corolla Gold, a Weeping Radish classic, are available at the restaurant and brewery and throughout the Outer Banks at many other restaurants for your tasting pleasure.

Weeping Radish Farm Brewery is actually the oldest microbrewery in North Carolina – a title that comes well deserved after owner Uli Bennewitz petitioned state politicians in the 1980s to allow microbreweries to sell beer directly to consumers. The logic in Bennewitz’s campaign was heard, and a movement of North Carolina micro-brewing was born with cutting edge breweries like Weeping Radish at the forefront. The establishment actually opened in Manteo, but a desire to expand the brewing operation and to add a working farm and butchery led Bennewitz to relocate to a swathe of lush farmland in Grandy. Now the restaurant’s fare is on par with the beer in terms of being as unprocessed as possible, and the butchery produces some of the best sausage and charcuterie on the Outer Banks – or anywhere for that matter.

Today the Weeping Radish is working toward establishing sharing initiatives with local farmers in the future while continuing to produce exceptional libations. The brewery’s newest creation, the Pink Lemonade Shandy, supports local breast cancer initiatives and is available at the brewery (Tours every Wednesday!) and in local craft beer stores. 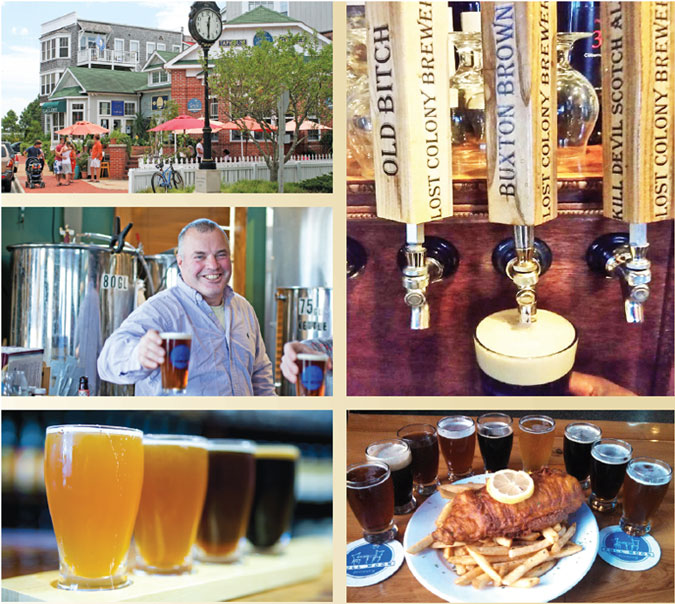 On the streets of the historic Manteo waterfront, husband and wife team Paul Charron and Sharon Enoch bring great food and exceptional brews to happy customers. Lost Colony Brewery crafts award-winning British and Irish style beers in a two-barrel brew house alongside spectacular coastal cuisine served at their Full Moon Cafe. You’re sure to have seen the names of the innovative brews throughout the Outer Banks such as the sweet, malty Buxton Brown Ale and the Kitty Hawk Blonde, a delicious citrus pale ale with a peppery hop finish. In fact, 30 bars and craft beer stores on the beach carry the malt based brews.

Within Full Moon Cafe, the beers are actually used in house for battering the fish and chips. When you dine here, you’ll find that the delicious libations have been used as ingredients in numerous menu items and sauces, with perhaps the most popular among the locals being the Imperial Stout Whole Grain Mustard made with the Holy Hand Grenade Russian Imperial Stout. The restaurant and brewery also recycles brewing grains to feed local farmers’ cattle and to make Brew Chews dog treats.

Stop into Lost Colony Brewery on your next trip to Manteo – or, seriously, make the drive just for Full Moon Cafe – to experience the ancient art of brewing first-hand, and make sure to try the Charron Stout, a dry Irish beer with molasses, caramel and toasted malt named after the creative and passionate visionary behind the brewery. 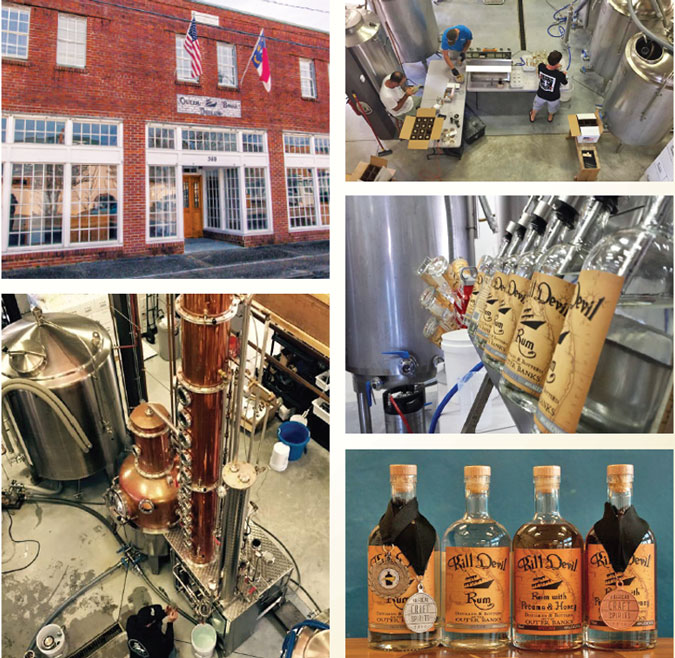 The tradition of making rum on the Outer Banks has returned with Outer Banks Distilling, a craft distillery located in a restored historic building in downtown Manteo that is producing the wildly popular (and tasty!) Kill Devil Rum. Two former brewers and two former bartenders make up the Outer Banks Distilling crew, declaring that making rum is an ex-brewer’s dream because of the incredible variety from white to gold to spiced and the creative process. Our area’s history of rum and piracy inspired the name of their libation, which has been released in two varieties so far – the silver label Kill Devil Rum and the Kill Devil Rum with Pecans & Honey.

Inside the handsome brick building on Budleigh Street, original pine floors and beautiful cypress beams house the distilling operation. Small batches of quality ingredients are flavored with spices that are as natural and local as possible including pecans and honey sourced from the community. (When the distilling process is complete, the rum-soaked pecans are given to local bakers, often resulting in an exchange of pies and cakes to the distillery owners’ delight.) Achieving the proper flavor profile is actually pretty similar to brewing beer, especially when it comes to dark rums, and the process is an intriguing thing to see.

Visit Outer Banks Distilling Tuesday through Saturday for a tour of the distillery and to question the owners on their upcoming creations. The word is gold and aged rums are in our future ...  and that’s a future we’re happy to be part of!

We currently offer group gatherings on Facetime and Zoom. Having a party, wedding or other...