It is entrenched with history, photogenic as heck and constantly changing form with each passing year. No, we’re not talking about the Outer Banks; all these qualities apply to the herd of wild Colonial Spanish Mustangs of Corolla. These horses share a lot of similarities with the Outer Banks. Their history is deeply rooted, they are beautiful, natural figures on the East Coast and, it bears repeating, photogenic as heck. And just like these barrier islands, the herd constantly changes form with each passing year.

The Corolla Wild Horse Fund (CWHF) monitors the herd, striving “to protect, conserve and responsibly manage the herd of wild Colonial Spanish Mustangs,” as stated in their mission statement. The horses frequent the least developed portion of the northern Outer Banks – above where the paved road ends in Corolla up to the Virginia state line border. They also operate the Corolla Wild Horse Museum, which documents the herd’s history since their Outer Banks origins in the 16th century and offers interactive programs to enhance the public’s education and appreciation for the herd.

The Fund’s duties go beyond museum management. Much of the staff’s time and energy focuses on protecting the animals from manmade hazards, such as housing development, vehicular traffic and inappropriate interactions between people and the horses. Their work often includes tending to injured or sick horses and recovering horses that wander past the fences that run from surf to sound on the south and north end of this 11 and a half-mile area. These responsibilities are challenging enough on their own; add the horses’ untamed behavior into the equation, and you see why protecting them is a 24/7 job for the Fund’s staff. 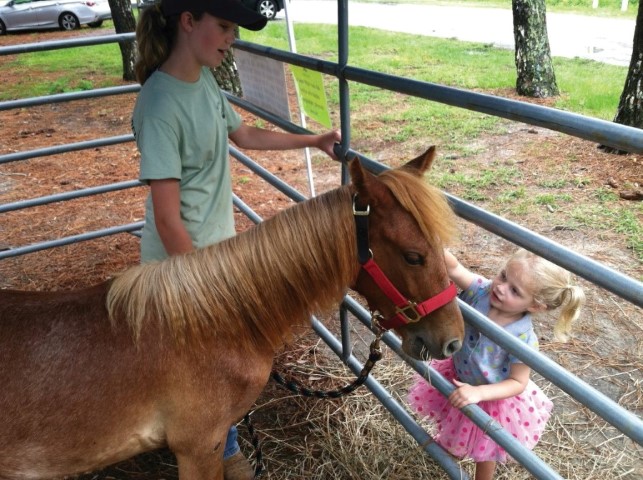 The Corolla wild horses are naturally curious and sometimes stubborn in their ways. These characteristics don’t always bode well with the increasing amount of people and development in Corolla and the northernmost community on the 4X4 area, Carova. When wild horses become too accustomed to people and begin approaching them, the situation may turn dangerous for both humans and the horse. If the Fund grows concerned that particular horses’ mischievous behavior may pose a danger to themselves or others, the staff will intervene – for the good of the horse and the herd as a whole.

For one stallion named Ducky and his harem, this was a recurring case for almost half of 2018. In January of that year, CWHF began receiving calls about a group of horses that made their way around the northern barrier fence and into False Cape State Park in Virginia. Initially, the Fund had hopes that this situation was just a one-time adventure or that they could persuade the harem to discontinue this behavior and stay within the parameters of the fencing. Over the next five months, however, it grew evident the horses were establishing patterns and territory in Virginia. This left the Fund with no choice but to have the six horses, a stallion with four mares and a yearling colt, removed and re-homed at the Fund’s rehabilitation facility, the Betsy Dowdy Equine Center, on the Currituck mainland.

Jo Langone, chief operating officer of the Corolla Wild Horse Fund, cites this event along with another in the fall of 2017 as two that significantly increased the number of horses residing under their care at the rehab facility. Up until that time, the Fund usually cared for five or fewer horses in various stages of rehabilitation at any given time. However, by mid-2018 there were 18 horses. For perspective, that number comes close to 20 percent of the entire estimated Corolla wild horse population. 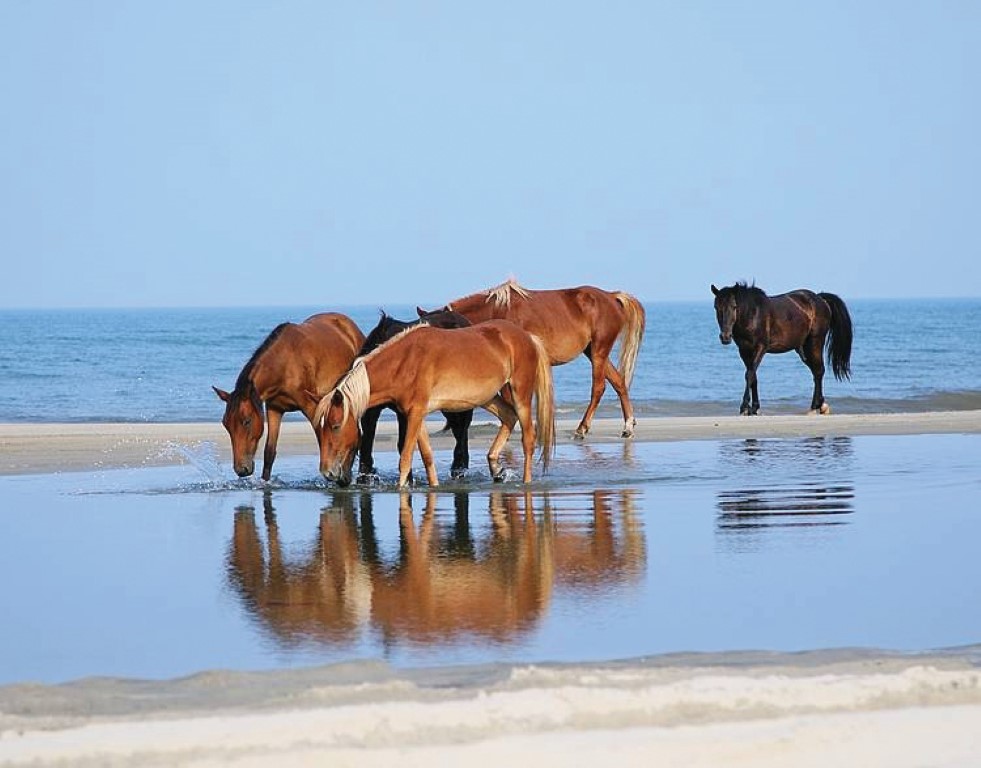 The first influx for the rehab facility’s population was with a group of horses now known as the Dews Island Mares. This tangential herd inhabited Dews Island for 20 years, starting with the stallion Red Man and his harem. Red Man was another stallion that refused to stay within the fence boundaries. At that time the Fund did not have a rehab farm for rescues. They did, however, have access to Dews Island off the Currituck mainland, a confined place that would allow the horses to continue living in the wild. It was decided all those years ago that it would be best to relocate them there.

In the spring of 2017, the Fund was asked to consider removing the remaining eight horses on Dews Island. This lengthy process required dedication and patience by the Fund’s herd manager, Meg Puckett, and their trainer, Nora Tarpley. They spent lots of time on Dews Island, familiarizing themselves with the horses, their habits and personalities. Getting the horses off the island in a controlled method presented another challenge. The only way to enter and exit the island is by a footbridge, too small for a horse trailer. Consequently, the staff and caretakers needed to train the horses to cross that bridge. Once they accomplished that, they could guide the horses into the trailer and transport them to the Equine Center with the Fund’s other rescued horses. By October of 2017 the work to facilitate this move was completed.

Between the Dews Island Mares and Ducky and his harem, the CWHF added 14 horses to the Fund’s existing four rescues within a relatively short amount of time. Fortunately, though, recent developments at the Fund aligned just in time to accommodate this influx.

For several years the Fund had leased the Betsy Dowdy Equine Center for the care of its rescued mustangs. In the summer of 2018, they were presented with the opportunity to purchase the property.  Rescue and conservation are key components of the Fund’s mission, and they recognized the need for a permanent off-island sanctuary for many years. This 31-acre facility – complete with multiple pastures, corrals and a barn – gives injured horses a place to rest and recuperate and noncompliant horses relative freedom in an environment safe from harm. Even after they rehabilitate, rescued horses can’t be returned to the wild for fear of spreading disease among the herd. In this spacious inland setting, though, they can live a peaceful and protected life.

Once the horses recover, the next step is for the Fund to acclimate them to people. Gentling and taming the wild mustangs is a multi-step process. It requires building trust between the horse and its trainer, and the process and time will vary with each horse. When rescued horses are domesticated, they often become ambassadors on behalf of the Fund and its work. Some horses are adopted by families. Others that remain under the Fund’s care play a role in the Corolla Wild Horse Museum’s programs, such as their Meet a Mustang event during the summer season.

Although the Corolla Wild Horse Fund recently moved their headquarters, they have their sights set on relocating again to a site large enough to accommodate their growing museum. With more and more visitors interested in learning about the horses and the herd’s history, the Fund hopes the museum will serve as its own destination in Corolla. By offering more educational and interactive programs – such as speakers, video programing and updated research about the Banker Strain of Colonial Spanish Mustangs – the Fund strives to raise the public’s awareness of North Carolina’s state horse and their understanding of how to protect this living, breathing cultural treasure.

The horses serve as an emblem for the natural and mysterious elements of the northern Outer Banks. The wild and free appeal associated with the herd will be preserved as the Corolla Wild Horse Fund safeguards these horses’ historic and cultural significance. And thanks to their protective measures, it’s a history that continues to be made.