The Corolla Wild Horse Fund shares The Secret of Corolla 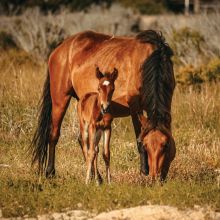 Tucked away in the quiet, untamed dunes of the northern Outer Banks beaches, the village of Corolla is home to a special herd of residents that roam amongst the scattered sea oats. The wild Spanish mustangs wander freely up and down the shoreline of Corolla and Carova, a living reminder of the rich history that belongs to these islands. Known as Banker horses, the herds we have today are ancestors of some of the very first Outer Banks residents brought over by early European settlers. Simply laying eyes on these horses from a distance is a once-in-a-lifetime, authentic Outer Banks experience in and of itself.

The Banker horses, now present in the far north and south ends of the Outer Banks, still have characteristics and features of horses native to Spain, with a few traits that are more closely aligned with Arabian horses. Once upon a time, these horses roamed free all up and down the coast (hence the name and local legend of “Nags Head”).

A chance to view and learn about the Banker horses is so sought after that they recently starred in The Secret of Corolla: The Gift From the Outer Banks, a 30-minute film produced by Jerry Thompson that chronicles the story of the four-wheel-drive beaches of Carova and Corolla and the horses that call this mutable landscape their home. Last year, the film took home second place at the EQUUS Film & Arts Fest and has just won Best Documentary Short Film and Best Musical Score at the EQUUS International Film Festival. All the proceeds from the film go directly to the Corolla Wild Horse Fund.

For us all to continue to witness the wonder of these endangered horses, a commitment to their safety and sanctuary is needed to ensure their survival – the Corolla Wild Horse Fund and their friends like Jerry Thompson make this possible. Their utmost mission is “to protect, conserve and responsibly manage the herd of wild colonial Spanish mustangs roaming freely on the northernmost Currituck Outer Banks, and to promote the continued preservation of this land as a permanent sanctuary for horses designated as the State Horse and defined as a cultural treasure by the state of North Carolina.” 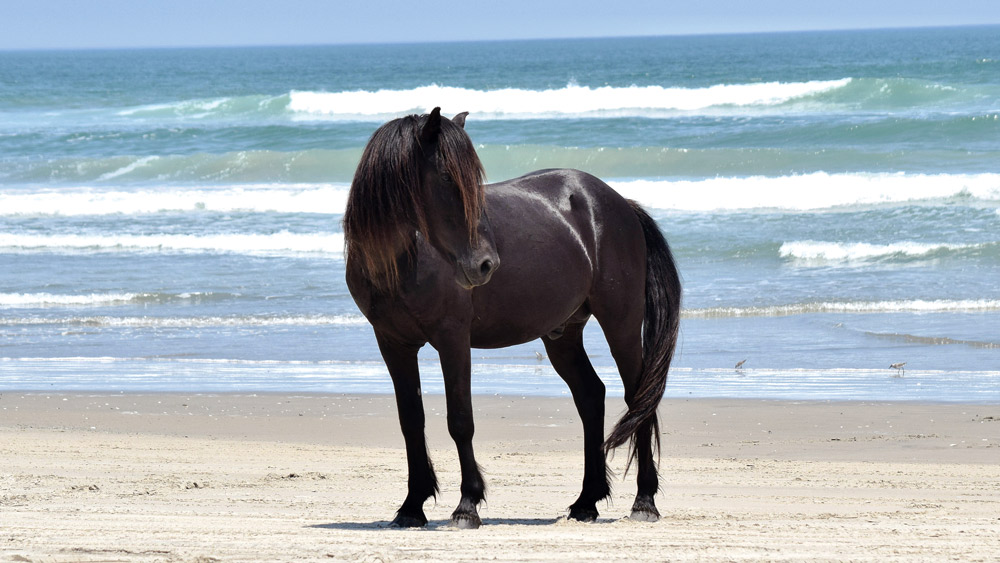 Because of their intelligent and curious nature, interactions between the horses and the development of Corolla are often hard to avoid. In 1985, the road between Duck and Corolla was paved, making the horses who lived there more accessible to humans and vehicles and consequently endangering their lives.

As a result, 11 horses were hit and killed on Highway 12 between 1985 and 1989, the year the Corolla Wild Horse Fund was formed. In the decade following the paving of the road, a total of 20 horses were struck. At its advent, the group was entirely volunteer-led by concerned citizens determined to conserve the horses and their habitat. Eventually, after six years of hard work and fundraising, the Corolla Wild Horse Fund made the difficult decision to relocate the remaining horses farther north of the newly paved road and join another herd. Alongside the move, the volunteers also constructed two sea-to-sound fences to help the horses demarcate their carefully determined 7,544-acre home sanctuary.

Their ambitious and admirable mission statement can be broken down into a few actionable day-to-day tasks performed by the Corolla Wild Horse Fund’s staff: herd management, sanctuary patrol, rescue and rehabilitation, training, adoption and education. Rehabilitation involving removal from the herd is the last resort, but sometimes it is necessary if the horse is sick, contagious or critically injured. Luckily, the Corolla Wild Horse Fund acquired the Betsy Dowdy Equine Center, a 31-acre facility in Grandy where the horses in rehabilitation can heal in peace. Here, they will adjust to human contact and become domesticated, ready to help visitors learn all about the wild horses up close. Many of these horses are also available for sponsorship, and in return for support, sponsors will receive a photo of their horse with regular updates and educational information. 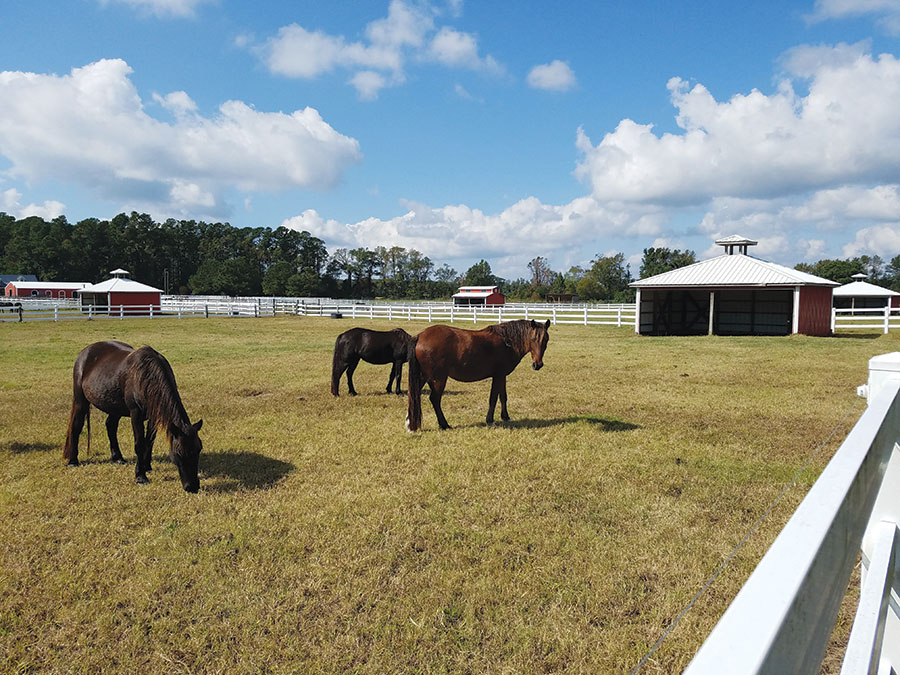 Though some of this work seems akin to pastoral care, there is a careful and dedicated veterinary basis for managing the herd, including breed conservation, contraceptive darting, DNA testing and ecology studies, as well as monitoring and maintaining the wellness of the horses and their habitat. Despite the lack of microchipping or branding, the staff is still able to track and document each individual horse and their features, health and body condition and harem composition due to their expert knowledge of and familiarity with the horses.

Though the early actions taken by the Corolla Wild Horse Fund helped to minimize the number of fatalities, manmade hazards still pose the greatest danger to the horses. As development here on the Outer Banks grows, their habitat shrinks. Housing construction, traffic and human interactions can all be fatal to the horses, which is why the staff of the Corolla Wild Horse Fund spends so much time tending to the horses and tracking their movements. The ability to identify the horses by their home territories and markings is a testament to the staff’s dedication – this also makes the wild horse tours that much more fun and exciting!

If one of the many available wild horse tours by commercial operators doesn’t quite satisfy your curiosity, or you want to learn even more about these treasured creatures, the Corolla Wild Horse Fund also provides many different educational opportunities throughout the summer as well as year-round opportunities. “Mustang Mornings” is a special weekly event during the summer months, and seasonal open houses are scheduled during the year. All offer visitors an opportunity to see all the rescue horses living there and observe some of the Fund’s rehabilitative work. 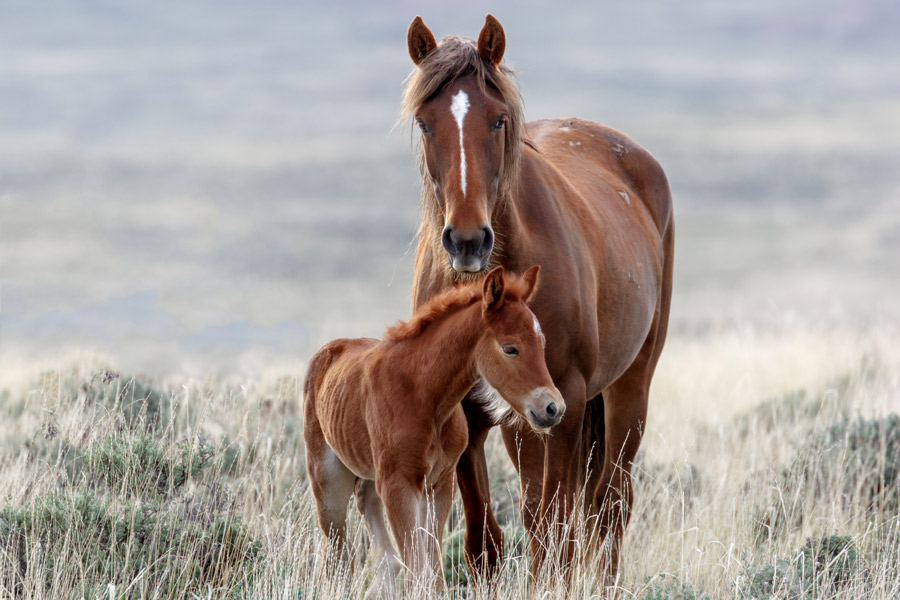 Above and beyond the on-the-ground fieldwork of the Corolla Wild Horse Fund are their efforts toward widespread awareness and advocacy amongst visitors and the local community. To care for the horses is to know their needs and boundaries – keep your distance (at least 50 feet!) and don’t feed them under any circumstances. Though it’s tempting to want to observe these beauties up close, following these ordinances is what keeps the horses safe and their population thriving.

Luckily, both the Corolla Wild Horse Fund and the horses have dedicated allies far and wide, such as Jerry Thompson. This year, the herd welcomed six new foals: Cedar, Cricket, Cyclone, Crow, Cádiz and Cosmos. Be on the lookout for the little ones on your next wild horse tour and discover the secret of Corolla for yourself – but don’t forget to give them plenty of space!