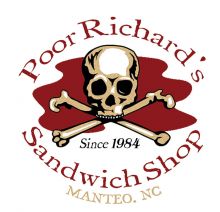 Nestled in an old shotgun-style building that stretches from the sidewalk to the boardwalk on the Manteo waterfront, Poor Richard's Sandwich Shop has become a landmark since it opened in 1984. "Back then, we only opened on weekdays," says owner Tod Clissold. "That was when the county offices were still here so most of our business was county employees. There wasn't much tourism in Manteo then so there was no one around on the weekends."

As time passed, the county offices moved and took some of the lunch business with it. But tourism grew and so did the restaurant's reputation of serving sandwiches and salads made only with the very best quality cheeses and cut meats. In the summer, the dining room is open from 8 a.m. to 8 p.m. serving breakfast, lunch and dinner. The porch remains open from 8 a.m. until the bar closes at whenever o'clock.

You can check out the wall menu as you enter from the street, but many already know what they want, as do the counter staff. "Some of staff has worked here for 15 to 20 years," says Tod. "They see a regular come in and they know exactly what they are going order. Reubens are king. That's our best seller on the menu." 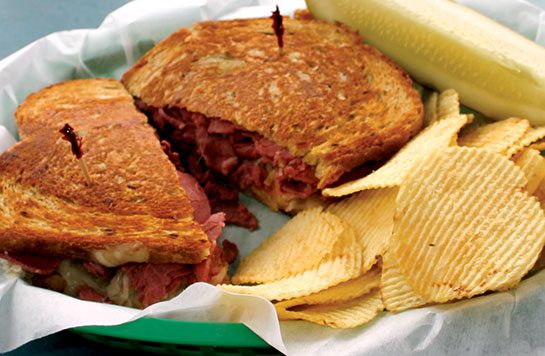 Eating is accompanied by the cheerful banter that ping-pongs across the no frills restaurant, and it might remind you of the television series Cheers - but Outer Banks-style.

"Our local regulars come in year-round, and many summer visitors make it a point to stop by whenever they are in town so that makes them regulars, too," says Tod.

The day starts with coffee klatchers who begin filtering in when the doors open. Some just want a cup of java, and others start the day with something off the full breakfast menu. They all bring the latest gossip, fish tales and news.

It's all colloquial and friendly, and the folks who come in during the day get that feeling of happy acceptance.

Now, when the night rolls around and Poor Richard's bar is the happening spot in this little waterfront town, a whole other crowd graces the seats. Yes, there are regulars, and, yes, they know each other's names, but strangers to the scene don't remain so for very long. Whether you find the place by happy accident or very much on purpose, there's always something fun happening - karaoke on Wednesdays, trivia on Thursdays and live music on Fridays, Saturdays and Sundays. We've heard musicians say that Poor Richard's is their favorite place to play on the Outer Banks because the crowd listens and appreciates. 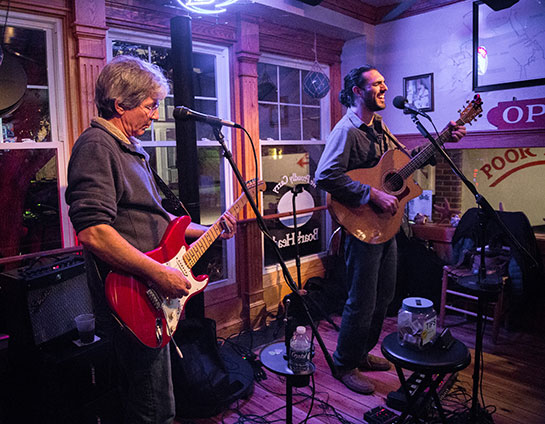 If the salt air calls you, as long as the bar is open, food and drinks are served on the porch that overlooks the town boardwalk and docks. Kick back, relax and watch everything from kayaks to yachts cruise around the harbor while the 16th-century representative ship, Elizabeth II, stands guard from her dock across the water.

When you leave, you will be taking some conversation fodder with you..."There's this place called Poor Richard's in Manteo where...." You can fill in the rest. 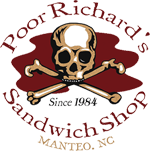 $5 Off for All Seniors (65+), First Responders or Military