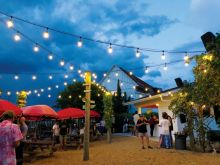 Yes, we are in the midst of a new era of social cautiousness, but that doesn’t mean you can’t go out for a great bite to eat and a tasty cold beer. When you’ve got that itch to get out, Outer Banks Brewing Station is an exceptional choice.

Space is one of the Brewing Station’s greatest advantages these days, and their vast interior offers several socially distant dining areas. Under the cathedral ceiling in the main dining room, there’s plenty of room for the tables to be separated for safe dining. Diners are spread out among the main floor, the cozy private alcove, the stage and the upstairs loft. In the bar area, patrons can sit in booths or at a safe distance along the pub’s extra-long bar.

Of course, outdoors in the backyard under the wind turbine is where it’s most safe to relax in the open air. Kick back at picnic tables or in the Adirondack chairs any time of day or night.

“It’s a chill spot to hang out and enjoy a beverage while the kids play,” says Eric Reece, one of the owners of Outer Banks Brewing Station. “Family-friendly is the whole point. The beer quality is a bonus.” 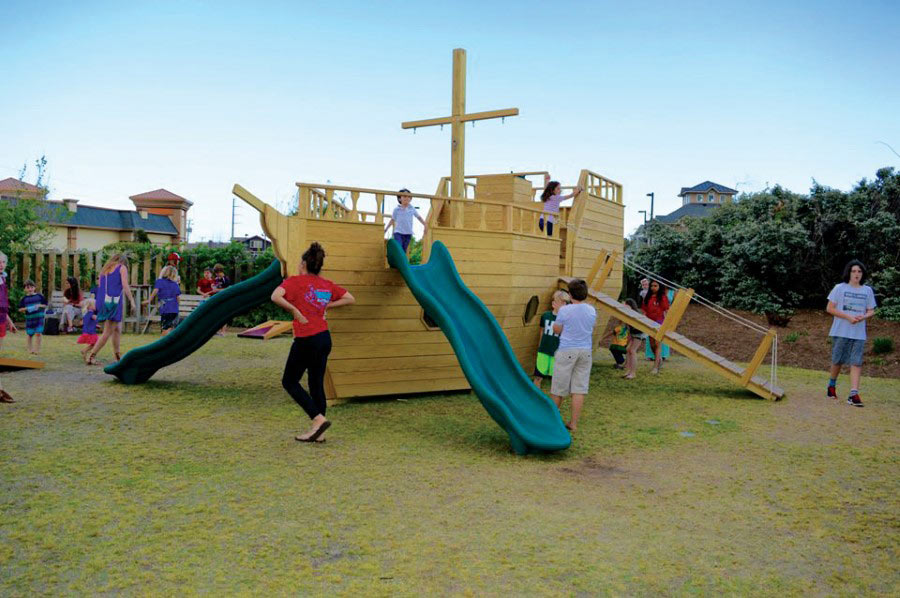 Adding to the feeling of dining security is Outer Banks Brewing Station’s commitment to safe serving and disinfecting practices. “We are one hundred percent committed to food safety here,” Reece says.

Regulars will be glad to know that Outer Banks Brewing Station’s menu favorites are still available, including regionally sourced beef. Their ultimate pasture-to-plate offering, the beef is from cows that are fed with their own spent grain from the brewery. It’s all part of what Chef Tony Duman and his seasoned kitchen staff call their menu of “contemporary American beach fusion.” It’s an eclectic blend of regional specialties, traditional favorites, creative combinations and vegetarian offerings. They’ve got seafood, burgers, sandwiches, salads, steak, pasta and entrees for everyone. They’ve even got gluten-free and vegan options. 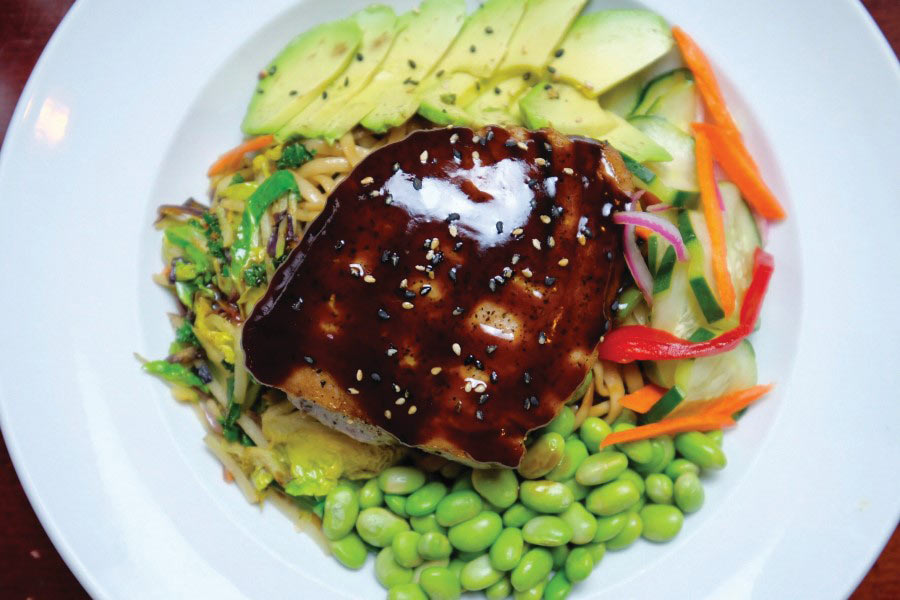 For those who’d rather enjoy a great meal at home, Outer Banks Brewing Station is also continuing its take-out menu. Spring diners were the first to get a taste of the restaurant’s takeout specials, family-style dinners, fresh-baked bread and desserts to go, and they were a huge hit. Take-out will continue this summer, and of course you can also get growlers of their beer and wines by the bottle to-go.

While the food style remains the same, there are changes coming for the beer at the brew pub. This past winter the brewing team purchased a new brew house, which will allow them to produce smaller batches and be quicker to change their offerings. Stay tuned for upcoming beer news!

You can enjoy a pint at the brew pub or pick up growlers, cans and bottles of their beers to go. You can also find their Lemongrass Wheat Ale in cans around town. 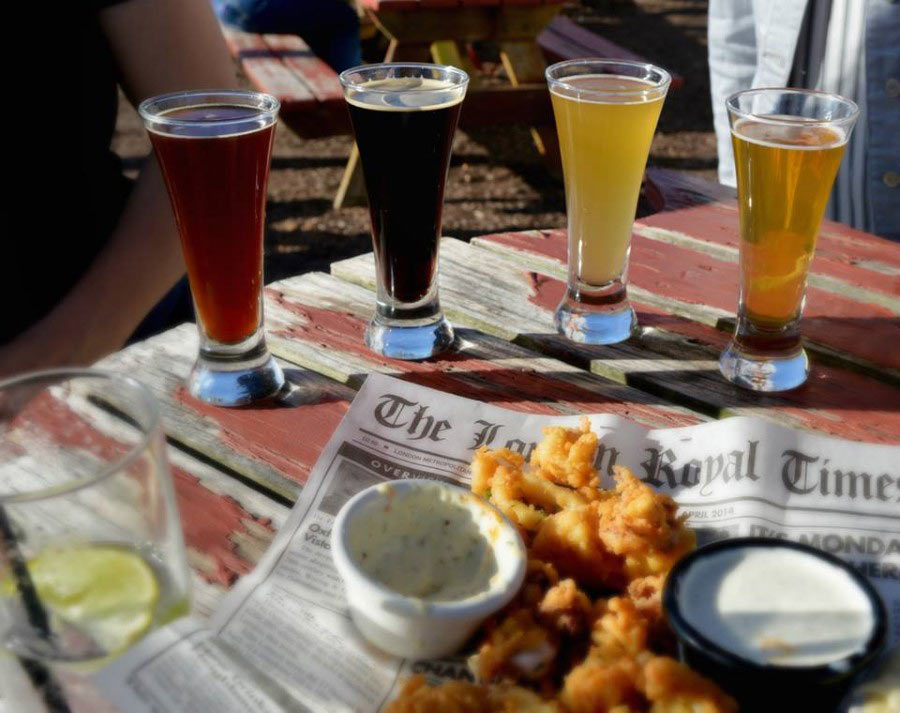 Combining beer with spirits, juice and other tasties like syrups and cordials is not a new thing, hence the shandy (beer and lemonade), michelada (beer, lime juice, hot sauce and salt) and boilermaker (beer and whiskey). But it is becoming a more popular thing, and Outer Banks Brewing Station’s bartenders are having fun creating these beer-based concoctions. Beer adds the texture and effervescence, the spirits provide the kick, and when combined they give a cocktail great lift. They’re imaginative ways to experiment with flavors and find new ways to love beer. Brewing Station bartender Alex Bradshaw created this beer cocktail, which he calls the Muscadine Sour Ale Margarita. "Sweet, sour and slightly smoky, this cocktail is your taste buds’ best friend,” Alex says! 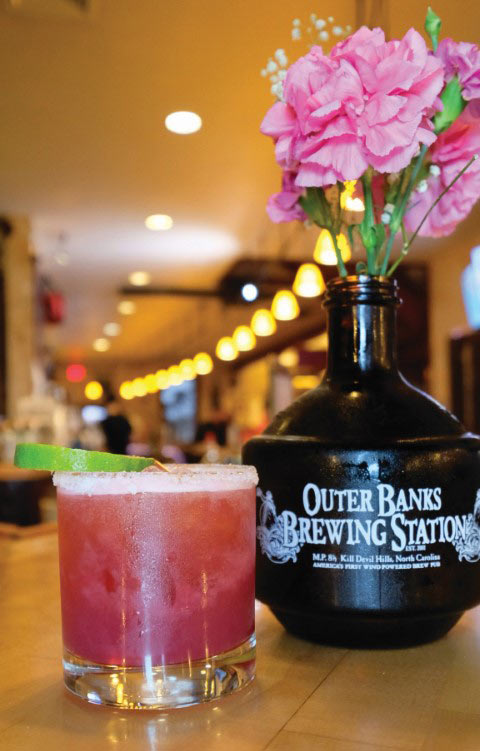 Lime Rim a rocks glass with lime and salt and fill with ice. Add an ounce of Muscadine Sour Pale Ale.

To a shaker tin filled with ice, add tequila, Mezcal and Cointreau and shake well. Add the Muscadine juice and sour mix and shake well again.

Strain the cocktail mixture on top of the beer. Garnish with a slice of lime.

In addition to the full menu and growlers to go, Outer Banks Brewing Station offers family-style meals that feed four people each. Here is a sampling of the menu.