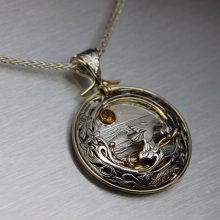 It's not terribly uncommon for people to think of artistic mediums-that is, the material artists most commonly use to create a piece of work-in fairly simple terms. Perhaps something along the lines of potters using clay or painters using...well, paint. The truth, however, is that a lot of artistic trajectories rarely take such a straightforward path.

Ben and Kathryn Stewart, the creative husband and wife team and owners of Silver Bonsai Gallery in Manteo, stand out as shining examples of how spectacularly unpredictable (and exciting) those more winding types of artistic paths can be. After meeting as students at Savannah College of Art and Design where they both initially focused their studies on illustration before switching to degrees in jewelry making, they subsequently moved to Oregon and became heavily involved in the thriving West Coast arts and crafts scene where many people embraced an impressive mixture of creative mediums. Inspired by this, they initially thought they might stay and set up a gallery together in Oregon, but Kathryn had grown up on the Outer Banks, and they both felt the allure of someday returning to the East Coast. 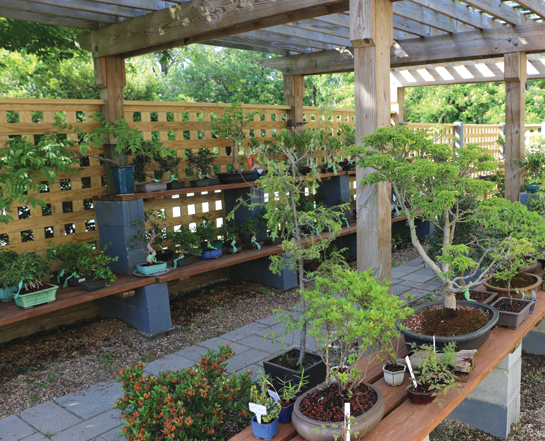 After some deliberation the decision to settle and set up shop on the Outer Banks was finally made...and not without some trepidation. "We went out on a limb with this," Kathryn says. "After we bought the building we had no budget at all for renovations." She recalls an afternoon when her brother stopped by to check on their progress and found her and Ben neck-deep in sawdust, drywall and paint. "You're going to make a gallery here?" her brother asked incredulously. It's something they can make light of now, but at the time Ben and Kathryn couldn't help but wonder the same thing: How on earth will we make this work? Doubts like those never really stopped them entirely, however, because they always had a crystal-clear vision of what they intended to do with Silver Bonsai Gallery. "While we knew this would be our workspace, we never wanted the gallery to focus only on jewelry. Instead we wanted to create a space for showcasing a variety of fine arts and crafts," Kathryn says. "A quality kind of gallery where art can blend into the day to day."

Blending art into the day to day is often no small task, particularly since what that meant to them was offering a full spectrum of fine arts and crafts, both decorative and functional. Yet when you visit Silver Bonsai Gallery today, you can immediately see how well they've managed to arrange exactly the kind of space they first had in mind 16 years ago. Simply put, the gallery is a sensory treat that begins before you even walk in the door with their luscious bonsai garden that seems to flow seamlessly with the indoor offerings that include unique ceramics, hand-blown and stained glass, wood and metal work, inlaid mirrors, candles and, of course, an incredible array of handmade jewelry made with gold and platinum as well as silver. 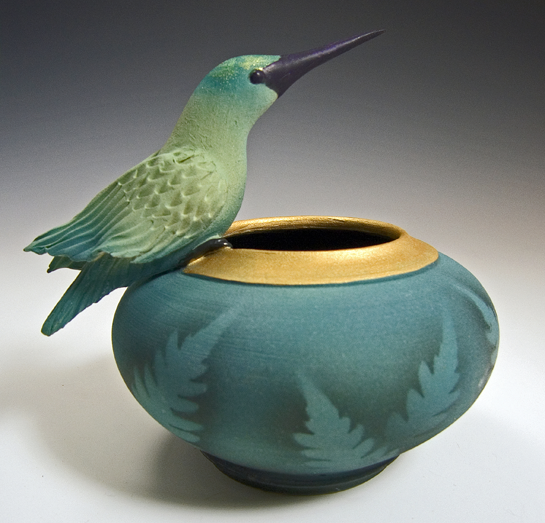 They also stand out in their dedication to promoting fine artwork. And it's truly hard not to be amazed by just how diverse the outstanding artists represented in the gallery are-from Linda Meyer Browning's stunning composite photography, which she creates by painstakingly inserting "several hundred to several thousand" tiny digital photographs in order to build a final piece of work inspired by nature that virtually explodes with colors, to the vibrant acrylic work of Brad Stroman whose compositions explore Zen concepts of "the tension between nature and manmade items." But of course that's not all: Gorgeous color pencil drawings by Linda Crassons, collages by Deborah Hershey, oil paintings by Petie Brigham, watercolors by K. Yen Fine and Fay Davis Edwards, stained glass by Anne Miller and metal sculpture work by Max Howard are just some of the other outstanding artists they proudly have on display. "There's been a ton of growth in the arts over the past 16 years on the Outer Banks," Kathryn says. "It's exciting and we feel privileged to have been a part of that movement." 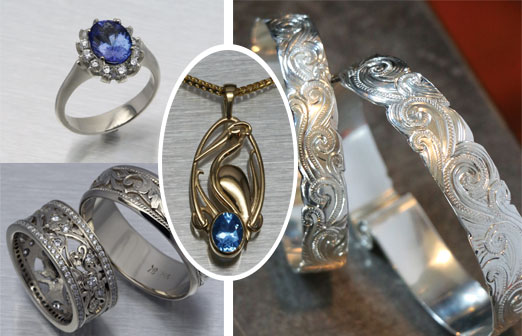 Again, it's all part of Ben and Kathryn's original impetus to cultivate a gallery space that supports artistry of all types and mediums in a complementary fashion-and it resonates with one of the first decisions they made to use the name Silver Bonsai Gallery. As the story goes, they had been debating for a while what to name the gallery when they happened to glance at a bonsai sculpture (made of silver, naturally) that they initially created together for a craft fair in Oregon. They instantly knew they had the name they'd been searching for, but it also made them realize that bonsai trees (which had long been a hobby of theirs) should be a part of the gallery as well. Now they not only offer an assortment of indoor and outdoor varieties of bonsai trees, but they also have a bonsai artist on staff and provide supplies and free weekly demos if you want to do more than take home a ready-made tree for decoration. "Really, it's simply another form of sculpture," Kathryn says enthusiastically. "They're living works of art, and the medium is a tree."

With all that goes on at the gallery it's hard to imagine how Ben and Kathryn have time to keep up with their own jewelry making, but the fact is that they do and that they do it with almost unimaginable passion. Though jewelry can often be taken for granted, the truth is that it's another art form in its own right-which also led Ben and Kathryn to set up an open workspace for themselves inside the gallery. "We want people to be able to come in and not only see but also hear the process-the details, the hammers and drills and all those sounds involved in crafting jewelry," Kathryn says. "It can be eye opening if you've never really thought about where jewelry comes from." 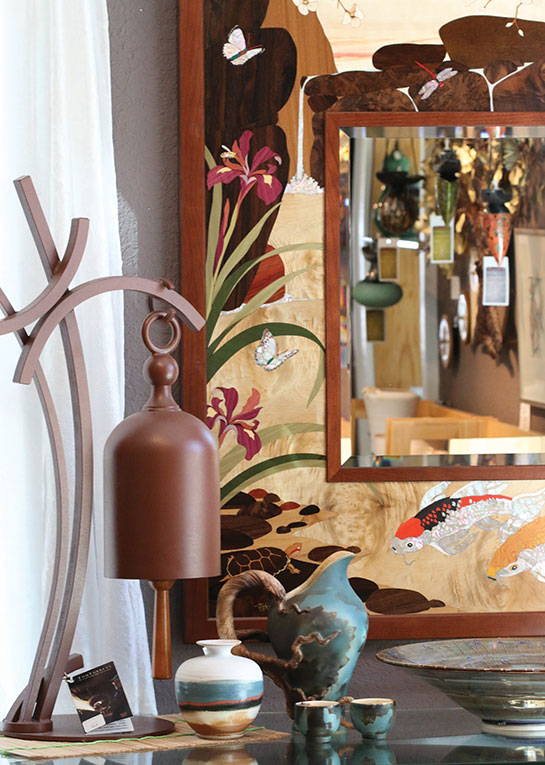 And not only that, but Ben and Kathryn really are a team in what they do, working side by side and in tandem on virtually every piece of jewelry they produce, from their more standard Outer Banks-inspired pieces to illustrative medallions and specialty lines such as their brand new Great Gate Collection, which recreates designs from the Elizabethan Garden's historical front gate and provides a valuable portion of the proceeds from each piece to fund the gate's desperate need for renovations. They've also been wildly successful in establishing their signature Modern Heirloom ® line of jewelry, which incorporates a number of unique engagement rings and other items that feature hand engraving and filigree details and are meant to encourage people to think about how today's "modern" jewelry can be passed down through generations in much the same way pieces were during earlier eras.

Perhaps one of the biggest works of art these two masters have created is the Silver Bonsai Gallery itself. Whether indoor or outdoor (or both) the atmosphere has a home-like feel to it, comfortable and aesthetically beautiful without being overwhelming. As Ben and Kathryn explain it, the building was always specifically and historically important to them (in fact, they purchased it from Mrs. Gray whose husband, Lonnie, was part of the first all African-American crew to man the Pea Island Life-Saving Station in the early 1900s), and they vowed from the start that they would only restore and add on to the original structure...a promise they have strictly kept. "Of course the gallery is constantly evolving," Kathryn notes. "We like to refer to it as a 'sliding puzzle'-we're always massaging it, it's always in the process of creation."

When asked if the Silver Bonsai Gallery is its own kind of sculpture, similar to other mediums of artwork like jewelry and bonsai trees, Kathryn laughs. "Yes, you could say that," she nods with a thoughtful smile. "You could definitely say that."