Fly, Paddle, Walk and Ride Through all Sides of the Outer Banks

Like many remote locales, the Outer Banks is at the mercy of the elements. These tiny islands shift and shape with the whims of the water and air, and the distinct maritime environment determines the diversions and activities at our fingertips. There’s water – obviously – in abundance. But, the Outer Banks offers acres upon acres of pristine maritime forest, sweeping sand dunes and plenty of wildlife to explore on its sound side.

Kitty Hawk Kites stands out among watersports and adventure providers with a curated selection of activities to help you experience all sides of the Outer Banks. Their instruction and adventure experiences let you take to the skies in a hang glider, skim the water’s surface on a kayak or feel the sand shrug under your feet as you position a kite to catch the wind.

With activities to inspire all levels of thrill seeking and 11 locations between Currituck and Ocracoke, Kitty Hawk Kites opens a gateway for the entire family to enjoy the sky, surf, sound and sandy environments around the Outer Banks. 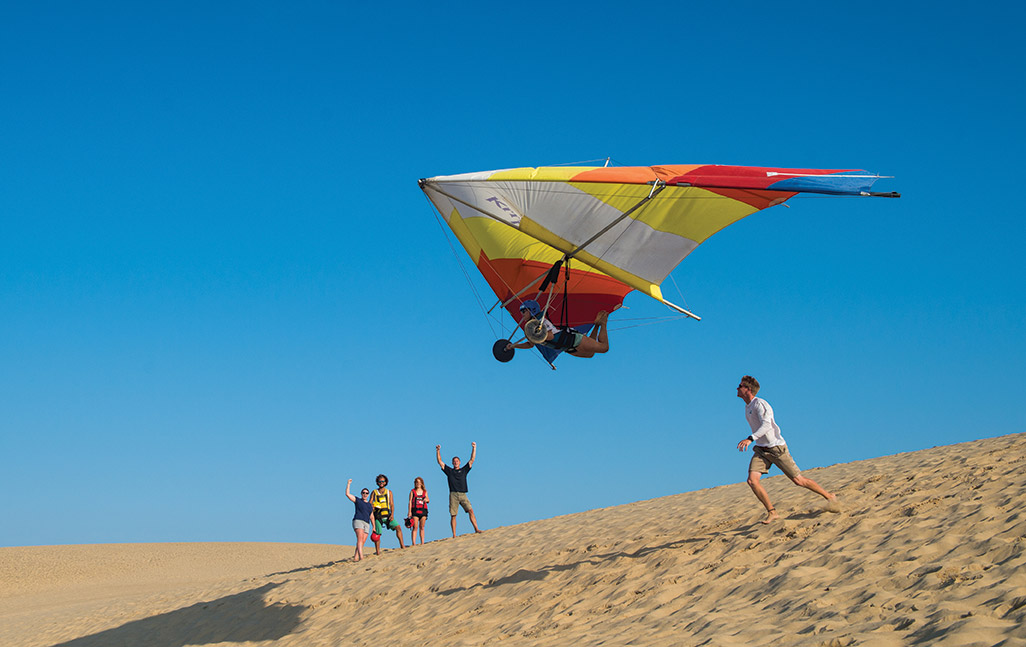 As its name suggests, Kitty Hawk Kites springs to most people’s minds for all things airborne. They’ve been teaching the world to fly since 1974 and operate the world’s largest hang gliding school. Headquartered in the Outer Banks, Kitty Hawk Kites shows students how to harness the wind in the same spot as the Wright Brothers. Try hang gliding from the top of Jockey’s Ridge, where the sandy surroundings offer an ideal place to practice launching and landing the glider. However, if you really want to get some air – and I mean up there – tandem hang gliding lets flyers soar up to 2,000 feet overhead or higher. New this year, Kitty Hawk Kites will be teaching powered paragliding, one of the fastest growing aviation sports. Kitty Hawk Kites offers both tandem hang gliding and powered paragliding at The Cotton Gin’s Currituck location.

Heights not your thing? You can stay grounded and still ride the wind (or waves, as the case may be) with Kitty Hawk Kites’ forms of kiteboarding. Their kiteboarding school operates out of Hatteras Island, where the Pamlico Sound serves as a premier playground for learning and practicing the sport. The shallow water and offshore winds create a safe environment that’s well suited for both kiteboarding newbies and masters.

Beyond standard kiteboarding lessons and gear rentals, Kitty Hawk Kites, dare I say, elevates the wind-and-board combos: Try wing surfing or the new Fliteboard, where a rider stands aboard a watercraft that flies over the water’s surface, hoverboard style. 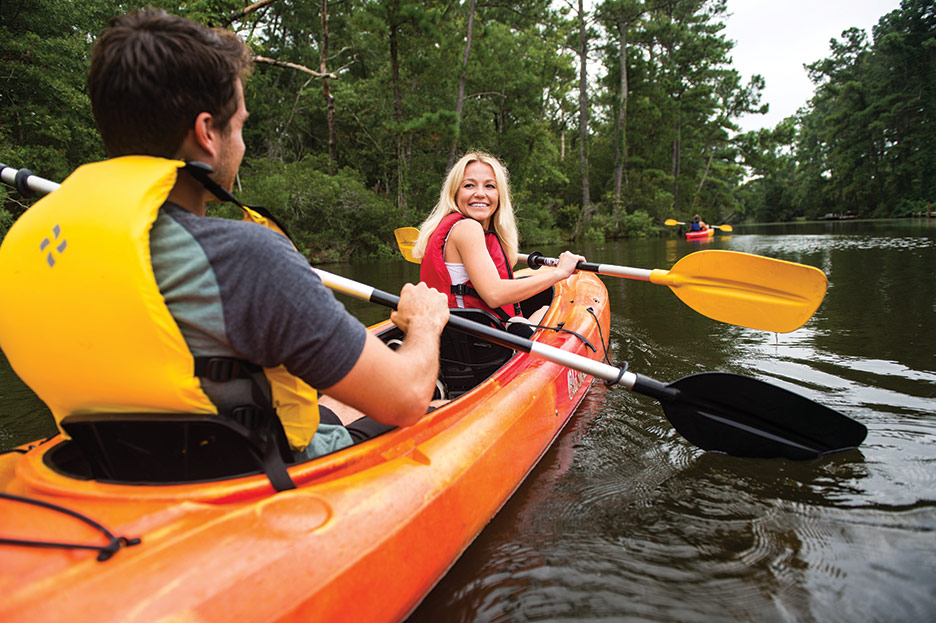 Kitty Hawk Kites’ reach isn’t exclusive to the Pamlico Sound. Their activities on the Roanoke Sound and Currituck Sound let you explore the central and northern Outer Banks’ sound sides. Sightsee and discover the area’s history and culture on the guided kayak paddle trips. Paddle around the Corolla salt marshes, the maritime forest of Kitty Hawk Woods Coastal Preserve or the Cape Hatteras National Seashore. Explore Roanoke Island’s marsh, where English colonists settled in 1587 before they became the Lost Colony, or see the bioluminescent waters surrounding Bodie Island. For wildlife sightings, take an eco-tour around the Alligator River National Wildlife Refuge, home to alligators and one of the largest population of black bears.

Boating around the sound doesn’t have to be an arm workout. Kick back for a leisurely cruise aboard a sailboat, pontoon boat, fishing head boat or motorboat. Whether on a day trip, afternoon outing or a sunset cruise at twilight, you can hang out with the family, cast your line or just soak up the sights while a knowledgeable captain guides you through the waters.

The Roanoke Sound welcomes migratory dolphins every spring and summer (this includes the newborn dolphin calves!). Forget trying to discern the dolphins from the porpoises on the beach, and see the dolphins up close on Kitty Hawk Kites’ special boat tour, led by researchers from Outer Banks Center for Dolphin Research. These experts know the dolphins’ hangouts and can even identify particular ones by name. 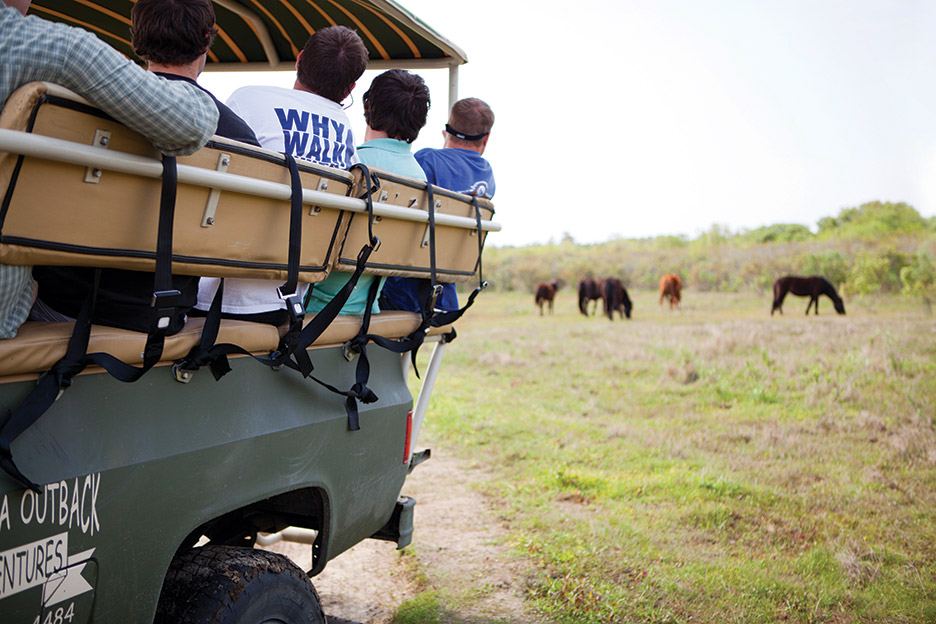 Kitty Hawk Kites operates one of the largest adventure companies on the Outer Banks, true; however, they’re also an environmental ambassador for the area’s ecosystems and wildlife. The Outer Banks holds beaches, maritime forests, marshlands and dunes. On-the-ground exploration of these places and encountering the animals and plant species they support showcases their environmental significance. Spot the wild Spanish mustangs in Corolla on an open-air horse tour. Or, if that’s not enough horsepower for you, trot along the Hatteras National Seashore on a guided trail ride on horseback.

Kitty Hawk Kites’ tours additionally expose the history and culture within the Outer Banks. Learn about Blackbeard and the pirate antics that led to Nags Head’s name on a Pirate Walk, or experience a guided walking tour by lantern through downtown Manteo to hear some of the spooky lore that makes the Outer Banks one of the most haunted beaches in the country. 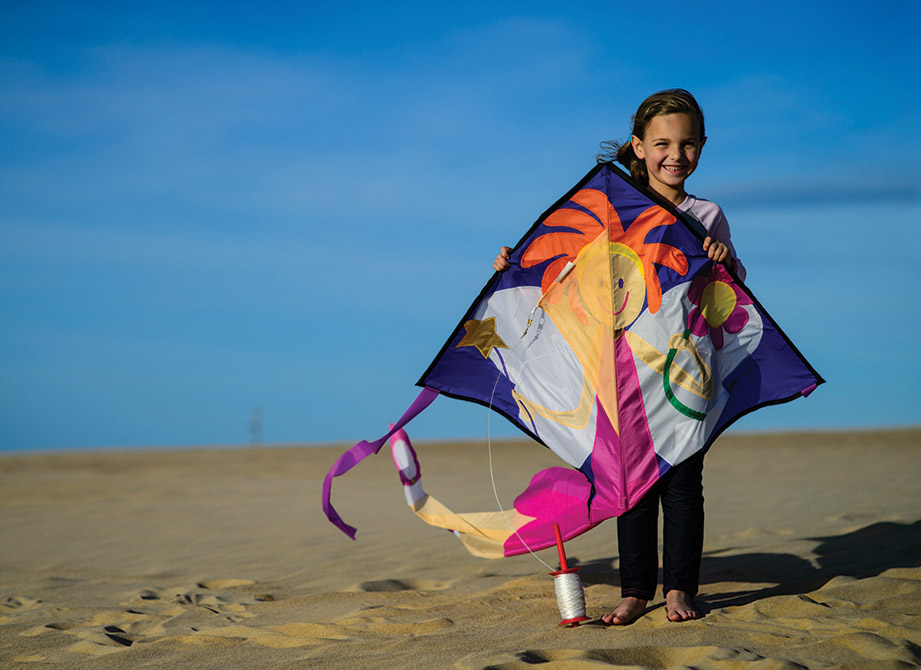 We do have to touch on Kitty Hawk Kites’ relationship with the very feature that draws so many to these islands: the beach! Much of the beach’s beauty comes from how it caters to both active adventure seekers and laidback beach bums. Fly a brilliant, vibrant kite from your seat in the soft sand. Skim board through the surf, or ride giant waves on a board (paddleboard, surfboard, even ocean kayak!). You can take in top views of both the beach and sound by climbing Jockey’s Ridge, the largest living sand dune on the East Coast. Its peak not only positions you for panoramic views of the island, but it also puts you in unbeatable territory for flying state-of-the-art stunt kites, available to rent and buy through Kitty Hawk Kites, which you can send soaring high and perform aerobatic tricks. You can even rent a sandboard from the Kitty Hawk Kites Hang Gliding School to ride down the dunes with speed. Jockey’s Ridge is a destination for Kitty Hawk Kites annual events, including the Outer Banks Kite Festival (held in September) and holiday-themed Kites with Lights.

This list only touches on the multitude of Kitty Hawk Kites’ earth, wind and water (but thankfully not fire) elements. For an inclusive list of all their activities, packages, pricing and locations, pick up a copy the Kitty Hawk Kites Outer Banks Adventures magazine or visit them at kittyhawk.com.