The Folks Behind the Fishing

A fishing marina relies on people – people to manage the dry dock, people to drive the boats and people to clean the fish. But when you ask those people what really makes a marina special, they’ll tell you something else. They’ll tell you that it’s you, the people who visit them every year to go out fishing.

Todd Cummings speaks with an accent that stands out from the “Hoi Toiders” of Wanchese. He grew up in Long Island, NY, clamming the Great South Bay with two older brothers. Todd first came to the Outer Banks on a family vacation a few decades ago. “Wasn’t much here at that point,” he laughs. Now, he considers himself more at home on the Outer Banks, where he’s raised two children, than in New York. “It’s been five years since I last visited. When I go there, I’m quickly ready to come back home.”

The marina has a community feel that sits well with Todd. “A lot of the boat captains and the other guys, after the days are over, we go down to the Tiki Bar together,” he says. And he likes the convenience of the marina. “There’s an electronics guy, Joe’s Marine for outboards, and plenty of fiberglass people to call. You have everything you need right here.”

When asked the most important part of his job, Todd laughs. “Making sure people are happy.” But that’s not always easy when it comes to moving boats. “Ninety percent of people are easy, but then there are some that are a bit tougher,” he says. “Some people watch us move their boats around on the lift, and they ask, ‘Are you sure you can do this?’” He laughs again. “But I get it. These boats are their babies.”

He assures customers that he and his colleague, Ed Baldwin, know what they’re doing. “It’s either Ed or me moving the boat, not some kid like you’ll find at other marinas. We won’t lift a boat we can’t lift, even if the owners are persistent.”

Captain Frank Smith loves when people come aboard the Wild Card, his twin diesel-powered, 35-foot Bertram, just to sit and talk. “I’m subject to talk you to death because I love what I’m doing.” 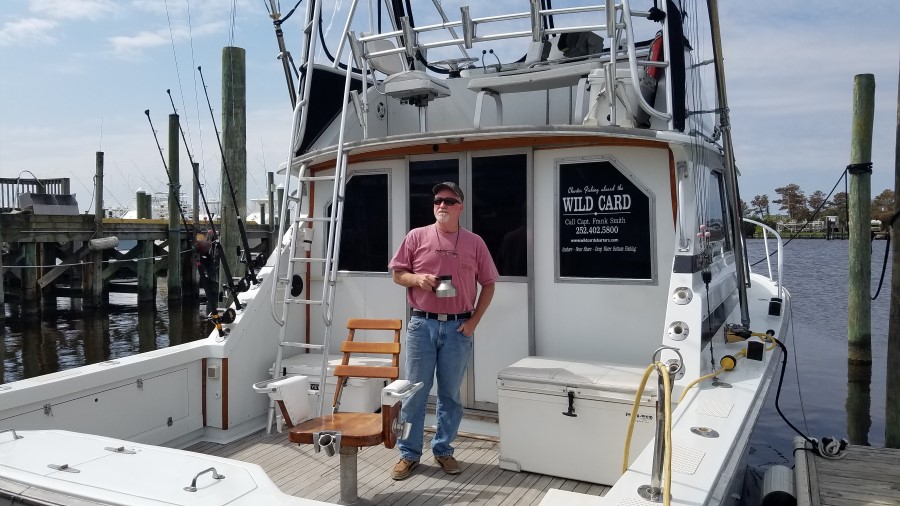 A Coast Guard serviceman turned fisherman, Captain Frank hails from Bath, NC. He remembers his first fishing trip well. When he was just 12, he went fishing for cod from a head boat. “She dipped down, and the water sprayed over me,” he says, “and I knew what I wanted to do for the rest of my life.”

Captain Frank appreciates how Outer Banks locals look out for each other. “Back when I didn’t know nothing about nothing, I lost my rudder. Here I was a young guy, broke and stuck. And a local crabber towed me all the way in. Didn’t want money, just helped me out. You just don’t find that other places.”

Now, he tries to impart that same feeling to those who come out fishing with him. “I’ll do whatever it takes. If folks have a good time on the first trip, they’re hooked for life.” He demands the same from his mates, who deal firsthand with the customers. 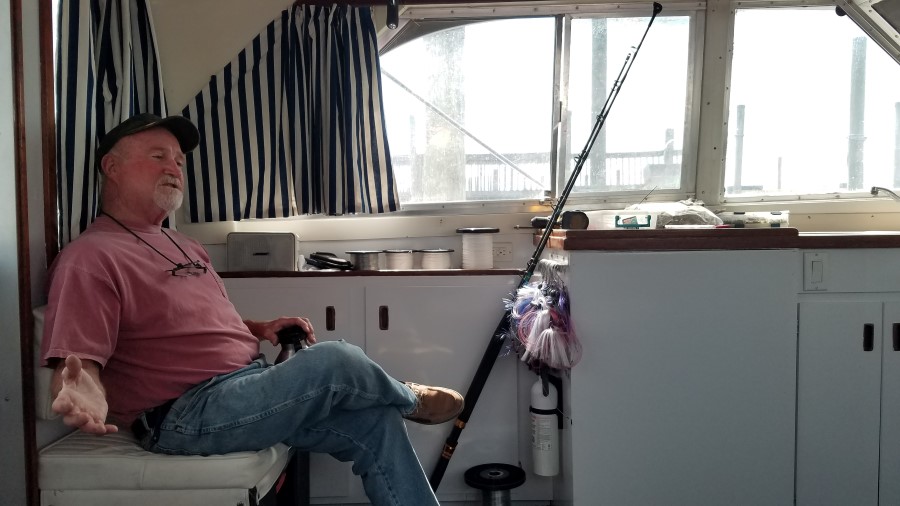 Captain Frank knows what it takes to keep people happy. “You get some folks who don’t want to fish, like this one little girl, recently. Next thing you know I’ve got her up driving the boat.” He shows off a picture of her at the helm. “Look at the smile on her face. That says it all. And I’m just as excited as they are, every day.”

Even after a lifetime of shrimping and commercial fishing, Captain Frank still doesn’t ever get burned out. “There are days when you are tired, sunburned, then you look over and you see that sunset, or the next morning you see that sunrise, and that’s like the biggest cup of coffee you could ever have.”

Captain Frank Smith grins wide and tips his stainless-steel cup toward the sky to emphasize his last point. “If the good Lord takes me tomorrow, I don’t want no tears, because I have been truly blessed.”

“What better office could you ask for,” says Bucky Mann, fish cleaner. “I look out over these boats every morning, and I wonder how people do anything else.”

A true Wancheser – “born and raised here, across the creek” – Bucky Mann was 8 when he first went out on a fishing boat. “Been at the marina for a long time.” He says. “Went to school with Wayne [Umphlett, owner of Outer Banks Marina]. When I talked to him about a job, he hired me on the spot.”

For two decades, Bucky’s office has been a shack that’s just a short walk from the Ship’s Store. It’s an open-air operation, something Bucky fought for because it allows people to watch his employees work. “I think people want to see that the fish they get after its cleaned is the fish they caught. Other places take your fish into some back room and give you a vacuum-sealed bag. We don’t do that.”

In the summer that means hard work in the heat. “But it’s like a show. Most people seen nothing like it before,” he says. “Our main objective is to do as good a job as possible and do as quick a job as possible so people can get home and enjoy their catch. My guys can clean a 40-pound tuna in under two minutes. I’ve cleaned 4-ounce croakers in the morning and 350-pound tuna in the afternoon, and people are just as excited by both.”

And if you’re wondering how to fix your catch, Bucky knows a thing or two. “Many people’s first question is ‘How do I cook this?’ so I made up a cookbook with a few of my old family recipes.”

Bucky loves to sit with his dog Maggie, who he’s trained to keep the birds away from the fish. “I’ve looked over the bows of these boats a thousand times and seen the sun come up,” he says. “There’s nothing like it in the world.” 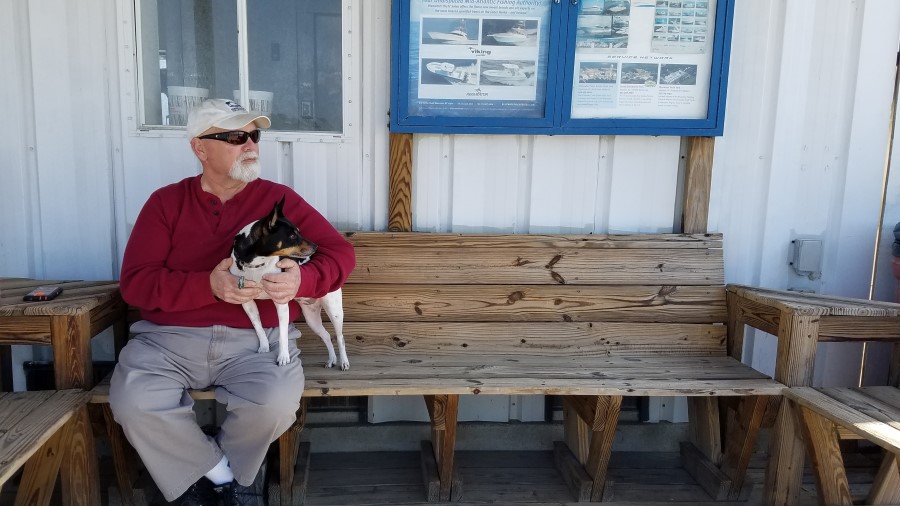 But most of all, Bucky Mann loves meeting people. “They come from all over, and some people we see again year after year. I just enjoy talking to them.”

It’s about time to make a few new fishing buddies, wouldn’t you say?

Folks like Todd Cummings, Captain Frank Smith and Bucky Mann are the lifeblood of the marina, but they can’t wait to meet you, the other half of the equation. So head on over to Outer Banks Marina. They’ll be there, waiting to welcome you in and get you out on the water.