Getting Wild in Currituck 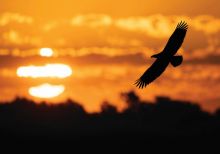 The sense of adventure you get when exploring Knotts Island’s wilderness feels almost magical. The minimally developed island, surrounded by the Currituck Sound, Back Bay, North Landing River and Knotts Island Bay, is home to a few houses, a grocery/gas station, a post office and the 8,500-acre refuge, known as Mackay’s Island. Getting there involves crossing the Currituck Sound by ferry from the mainland and then driving down the narrow winding two-lane road – where the sound’s waters crash against the rocky dikes, splattering cars’ windshields. When I went, the wrong turn I took down a dirt road, which led me through marshlands and prairie fields and left me under a  canopy of pine trees, only added to the entire experience of visiting. As I neared the Mackay’s Island National Wildlife Refuge, the blue heron perched by the road took flight, slowly gliding mere meters ahead of my car – like an unofficial welcoming committee – as I approached the visitors center and main offices. It felt like an assignment out of National Geographic.

On the other side of the Currituck Sound, the adventure continued the first time I visited Corolla’s Pine Island Audubon Center. In the two hours I spent there, the only manmade structures were the center’s offices housed in the Pine Island Lodge – a 1913 hunting lodge – and platform-style docks on the Currituck Sound. The tranquil surroundings made me forget that I was still in the booming vacation destination that welcomes thousands of visitors every week during the summer.

The beach often steals the spotlight when it comes to the Outer Banks’ habitats and natural environment. However, the sweeping waves and dunes are far from the area’s only significant natural features. Environmental researchers, nature photographers, birders and outdoorspeople arrive by the thousands each year to check out the Currituck side of the Outer Banks, home to pristine maritime forests, shrub swamps, tidal marshes and more. 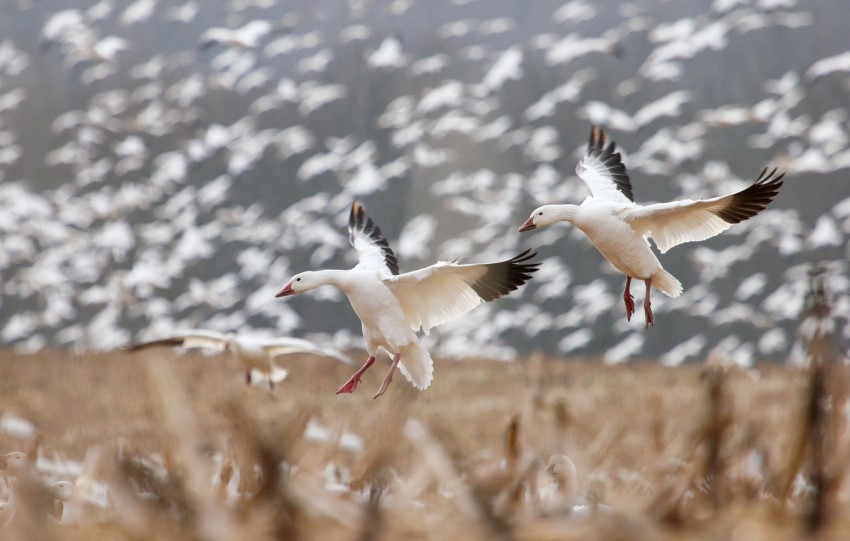 Currituck’s sound side is an ecological goldmine. Sheltered from the ocean’s winds and salt spray and located about halfway between northern and southern climes, the area’s biodiversity dazzles environmentalists, researchers and the common hiker. The islands and mainland are home to about 10 different habitats – an emporium for migrating bird species. This significant little corner is an intersection of the northernmost reach for southern birds’ migration and the southernmost region for northern migrating birds.

While human development has converted much of Currituck’s land into family farms, residential areas, commercial centers and vacationing grounds, the Audubon Center at Pine Island and Mackay’s Island National Wildlife Refuge maintain untouched examples of the county’s wild side. Both organizations manage the valuable environments, research the species of flora and fauna and foster connections between Currituck’s community and the land.

“We’re a hidden gem of Corolla,” Robbie Fearn, director of Pine Island Audubon Center, says while gazing across the Currituck Sound toward the mainland. Water, marsh grass and wax myrtles are all the eye can see. Hardly a mile off N.C. Highway 12, this 2,600-acre tract (14,000 acres if you include the water area) supports about nine different habitats including maritime evergreen forests, tidal freshwater marshes and stable dune barrens. People visit to hike and bike the 2.5-mile nature trail, fish for bass or kayak in the sound, and in the fall and winter months, so it’s to see droves of migratory bird species.

As the only Audubon Center in the state, Pine Island serves as a sanctuary for around 185 bird species. Some live there year round, such as American bald eagles, barred owls, white ibises and king rails. Others, like American black ducks, snow geese and tundra swans, migrate in for the fall and winter months. For some, mainly migrating songbird species, Currituck serves as island-stops where they can eat, rest and recharge before continuing their route. 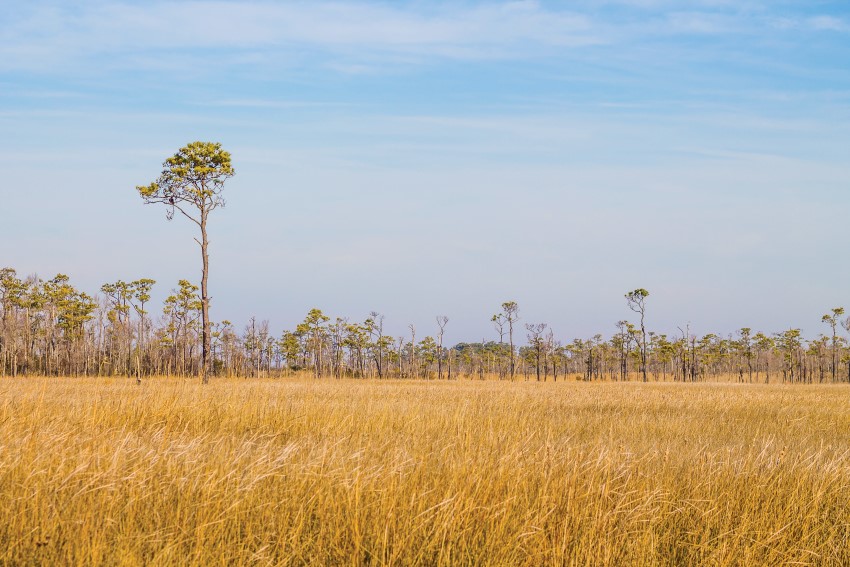 Many of these same species are also found across the Currituck Sound at Mackay’s Island National Wildlife Refuge. It’s an awesome daytrip for locals and visitors to the Outer Banks and Corolla – you cross the sound from the Currituck mainland aboard the Knott’s Island ferry (though if you have extra time to explore, you can also drive there via the Virginia Scenic Byway). Mackay’s Island attracts about 30,000 visitors each year, primarily birders and photographers eager to glimpse a near threatened species, such as the king rail, or catch a snapshot of the area’s renowned beauty.

In addition to birding and photography, outdoorspeople come to fish for bass from impoundments (small peninsulas that jut into the water) and explore the non-gated trails by foot or by car. “For a lot of people, we’re the end of the road,” says Mike Houss, director for the refuge.

Within Mackay’s Island, the gated trail systems are closed to the public from October 15 through March 15 to let the birds nest undisturbed. However, the refuge hosts a series of Open Road Days when normally closed-off portions of trail are open to the public for a three-day period. Birders, photographers and hikers flock to the trails to hike and spot American bitterns, king rails, snow geese and tundra swans and experience the beauty for themselves.

In addition to recreational uses, research is being conducted at Pine Island and Mackay’s Island sanctuaries to broaden ecologists’ and ornithologists’ understanding of the habitats and the species they support. From tagging birds to track their migration patterns to surveying the effects of ever-rising global temperatures on different species’ behavior and migration habits, the continuous and constantly evolving research at Pine Island contributes at the national scale. 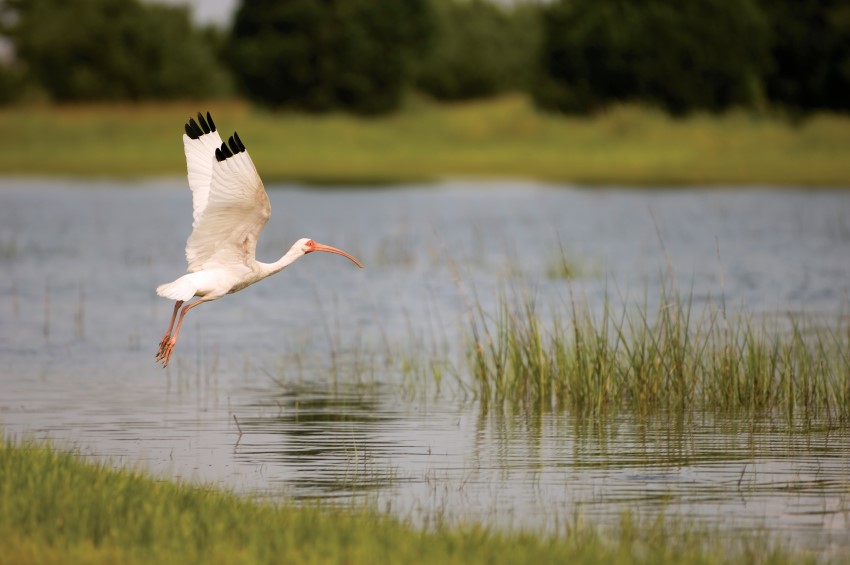 Pine Island regularly welcomes groups of students and researchers visiting from major universities. The center’s offices and educational campus make up only 60 acres of the 2,600-acre sanctuary, so the experience is nothing short of immersive. The students and researchers stay in the historic welcome center – the hunting lodge converted into bed-and-breakfast-style rooms and an office space – or at nearby Corolla hotels.

Pine Island also welcomes visitors beyond academics and researchers. Anyone can schedule a group tour or visit, whether for a day or overnight, or check out scheduled programs on the center’s calendar (available online). Programs include guided moonlight hikes, nature illustration workshops led by visiting artists and kayak eco tours of the Currituck Sound. These activities often occur during the spring and summer months so that the birds may nest undisturbed during the fall and winter. However, the cooler months bring special opportunities to interact with the numerous migratory bird species, such as the annual Tuesday and Thursday morning nature hikes during the annual Wings Over Water Wildlife Festival.

Put on your close-toed shoes, and take a walk on Currituck’s wild side this winter. Try a peaceful stroll (or drive) around Pine Island’s nature trail. Or, if you have more time, take the ferry to Knotts Island and visit Mackay’s Island. Drive or hike the protected trails during the warm seasons or on Open Road Days. If you’re here at other times, the highway skirts along the refuge boundaries. You may not see any birds from the car, but Mike advises pulling off and pausing a moment by the side of the road. Turn off your engine. “Just listen, I tell people,” Mike says. “They’re chatty, and they’re funny. If you get quiet, you can hear all of them around you.”