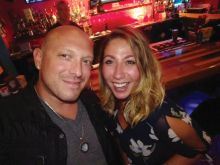 If you’re one of the lucky ones, you had a good ol’ uncle to call on at some point in your life. Or maybe for you that good ol’ uncle was an aunt, grandma or grandpa. Whoever it was, you knew you could go to them no matter what you needed. But if you didn’t have such a person, you can experience what it’s like to have one now, because good ol’ Uncle Ike has got you covered.

Since he moved to the area in 2009, owner Tony Northrup has run Uncle Ike’s Sandbar and Grill, a bar and restaurant tucked into the Corolla Light Town Center, based on a principle of hospitality that he learned early in life. Says Tony, “My Italian mother always said, ‘What?! You’re only going to bring one friend to dinner? Why aren’t you bringing five?!’”

His mama would be proud because Tony now welcomes in thousands of people a year. Uncle Ike’s Sandbar and Grill invites you in from the moment you hit the front steps. The bar and restaurant have a breezy, open feel with a surfer vibe. There are plenty of reminders on the walls that people come from near and far to visit Uncle Ike’s. “I like that our visitors come from all over,” says Tony. “Makes this feel like a small world.” The other eye-catching feature is the dollar bills that hang from the ceiling. There’s a story there, of course, but we’ll come back to that one in a moment. 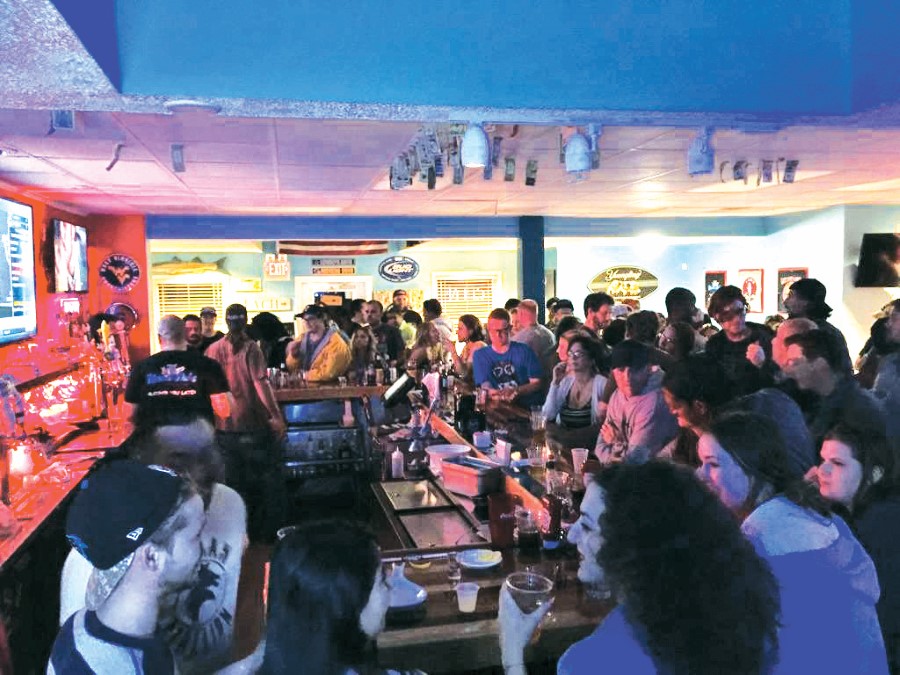 For the last eight years, Tony has continually added and changed and modified and tinkered, a restless approach that fits his personality. He’s a bundle of energy, and as the sole owner, since he bought out his partner recently, he’s a busy man. As we talk, Tony fields questions from repairmen and employees, handling one crisis after another. “I should have learned all the trades,” he says with a laugh. “Forget going to college … I should have learned how to be a plumber, how to do HVAC. It’s like this every day.”

But it’s clear that Tony loves what he does. “The stress is ridiculous sometimes,” he says, “but the customers keep you going. That’s what this business is all about: the customers. I started out with a brief stint in the pizza business, and my boss told me ‘Tony, anyone can make a good pizza, but what sets you apart is how you treat people.’ I’ll never forget that.”

Corolla has changed over the years, and Tony has worked hard to keep up. “When Uncle Ike’s first opened, we were the only full-liquor bar at this end of Corolla. Now Cosmo’s Pizza [right next door] has a bar, and Corolla Cantina has a bar and there are a lot more businesses up here in general, so we have to find a niche that works.” He points to the brand-new putt-putt golf course right next door to the deck of Uncle Ike’s and laughs. “I tell people that we can be Ike’s 19th Hole now.” 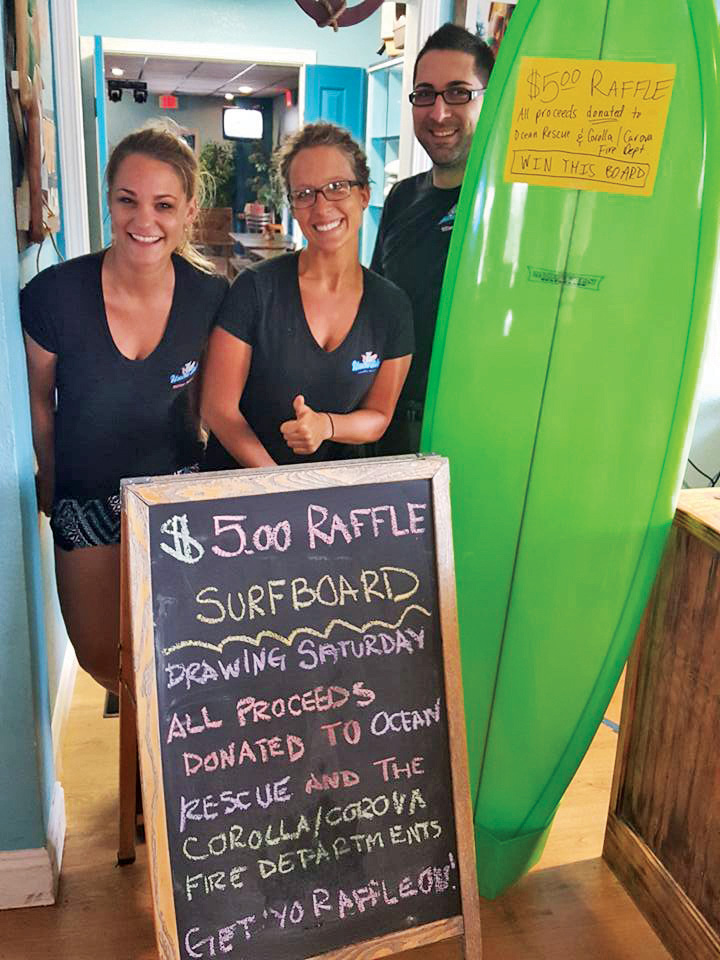 Tony talks excitedly about how he’s building up capacity for new visitors. “We increased the size of the kitchen, added two new fryers and a new char-grill so that all our burgers and chicken and steak can be flame-broiled. We added an outside beer cooler, and we will have 19 draft lines this season …  a huge step up. And I’m putting in a new bar on the deck.”

Tony’s energy extends to ideas to make Uncle Ike’s something special for every individual who walks through the door. “I got the UFC fights for the whole year. And we do fun giveaways,” says Tony. “Like every Thursday, we are going to give away a surfboard. You come in, get a raffle ticket and at 10 p.m. we will call somebody’s name. We built our scene on karaoke, but we have also started doing live music now, too, with three bands a week. And we’re brainstorming fun events, like a beer fest in October.”

Tony’s not worried about keeping only the visitors to Corolla happy; he cares deeply about the locals too. “This is the first year we didn’t close in the off-season. We stayed open, and we started giving food away for happy hour. We had a free food buffet from Monday to Friday, and the locals responded.” I asked him if he planned to keep doing that. “As much as it makes sense financially, we will keep changing it up, trying new things. Corolla is a quiet town during the winter, and there’s not a lot to do at night in the off-season, so we wanted to give back to the community that gives so much to us.”

Mark Twain once said that the best way to cheer yourself up is to cheer someone else up first. Tony Northrup seems to share the famous author’s philosophy.

“It’s tough to run a business in Corolla,” says Tony. “We battle staffing issues due to lack of housing. And there’s the seasonal aspect of our community. And northeasters and hurricanes can always mess up a great weekend.

“I do the charity stuff to stay sane. We do a lot of local events for the fire department and for the Lifesaving Association in Corolla and Carova. And I try to match whatever we raise at the events to double the amount. I appreciate what they do for us in the community. This town is a unique place, and people do so much for each other here.”

In addition to supporting his local community, Tony has found another community to be a good ol’ uncle to – Helping Haitian Angels, a 501(c)(3) nonprofit organization that provides complete care for the children of the Kay Anj D’ayiti (Angel House of Haiti) in Dekle, Haiti. The organization was founded by Bill and Debbie Harvey of Haymarket, Virginia, after they came across 35 homeless children living in an abandoned building while they were visiting Haiti on a mission trip. They now provide medical care, shelter, food and clean water for Haitian children. “But more than that,” says Tony, “they want to raise a stronger generation of Haitians, teaching them in their native tongue and helping them learn skills, not just sending them away from Haiti through adoption, so that they can grow up in their own country and be prosperous.”

Tony first learned about Helping Haitian Angels five years ago, and since then he’s been helping the cause every year. “We decided to do something, so we put the dollars donated by customers on the ceiling. We take them all down once a year, and I match them from my own profits and send a donation to Helping Haitian Angels.” Tony says he’d like to keep building on the effort, though, because there are more children in need, and his donation only puts a small dent in the real cost of helping even one child.

Are you in need of a good ol’ uncle in your life? Well, you’ve got one now in Uncle Ike. Need to blow off some steam? Go to good ol’ Uncle Ike. Need to find a few new friends? Hungry? Thirsty? Looking for a way to give back, to help someone out? Go to good ol’ Uncle Ike’s Sandbar and Grill. Get yourself a great meal, enjoy a night with friends and, while you’re there, add a few dollar bills to that ceiling, won’t you?

Celebrate the end of the year with us with 20% off everything on our website with the cod XMAS22...