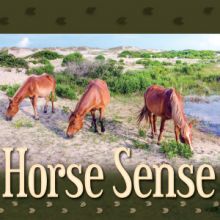 He’s of average height and has nicely muscular legs. His hair could probably benefit from a good brushing, but the amber-ish color is nice. He’s frisky, which makes him wildly attractive. But it’s the eyes, those eyes! — those huge, brown, dulcet eyes — that really draw you in. Who on earth is this hunk? It’s Gus, the new stallion to the Corolla herd. But, as handsome of a horse as he is, Gus wasn’t brought in for his good looks. It was for his genes. He hailed from Cedar Island to our south before moving up north, and he’s the first horse to be introduced into the Corolla herd in more than 500 years!

The Corolla herd of Colonial Spanish Mustangs, which at present is made up of approximately 100 horses, has gotten pretty tight. By that, I don’t mean that the 24 harems (one stallion and usually four mares) consider themselves all buddies. In fact, there’s constant jockeying among the stallions for mares. Rather, the genetic code has become too similar. The Corolla herd has only one maternal line. Gus, by contrast, comes from a herd that carries three maternal lines. As Karen McCalpin, Executive Director of the Corolla Wild Horse Fund, explains it, “We are comparing apples to apples, since both Gus and the Corolla horses are genetically Colonial Spanish Mustangs. It’s not as if we introduced an entirely new breed into our herd. We simply broadened it with Gus’s separate maternal lines.”

In fact, before Gus was accepted as a new member, he had to go through a lot of vetting. He was part of an original herd of about 40 wild horses that was removed from the Shackleford Banks, near Beaufort, NC, and their offspring for population control that is managed by Woody and Nena Hancock. When Karen and other wildlife biologists stressed the need to introduce a wider genetic code into the Corolla herd for longevity sake, they contacted the Hancocks, who then identified two stallions in their herd that were potential candidates. 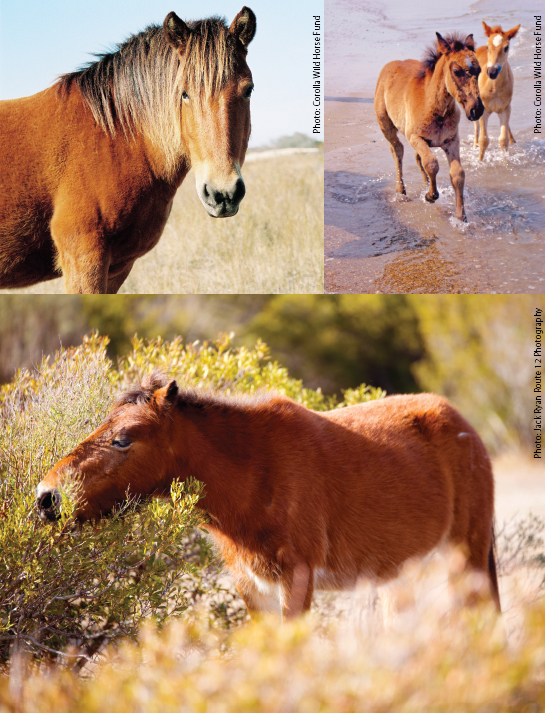 In June of 2014, Karen traveled to Cedar Island to acquire DNA samples via a remotely delivered dart. The samples were sent on dry ice to Dr. Gus Cothran (guess where the name came from for our new guy) at Texas A&M University, a renowned equine geneticist. The results showed one of the stallions carried an ocular abnormality, so he was no longer considered as a candidate. But Gus, who at that point was known as Kenny, had all the right stuff. (As a bit of interesting info, horses on Cedar Island are named after residents, living and deceased.)

You might think that the biggest challenge was over: horse found with the proper genes for the job. But, actually, the real challenge was ahead of them: getting Gus to his new home safe and sound. Imagine if you’re a horse that has spent his entire four years running totally wild among other horses that are, at least instinctively, familiar. Your contact with humans has been rare, and you’ve certainly never had to deal with some person trying to get you to do something. You just don’t lead a horse like that up a ramp and into a trailer. It actually took almost a herd of people to accomplish the move. 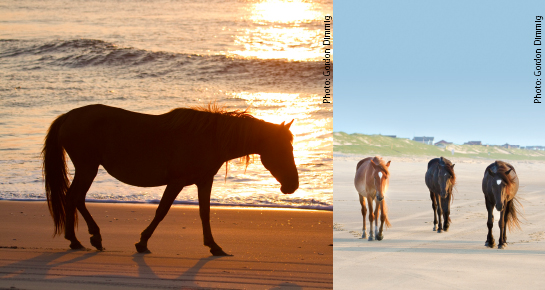 First, they had to wait for cool weather. The discombobulation to Gus was going to be enough on its own without adding the stress of heat. Then they had to assemble a very specific team: a wildlife biologist from Cape Lookout National Seashore to shoot the horse from afar with a tranquilizer dart; a licensed vet to oversee the tranquilizing and then to administer sufficient anesthesia to keep Gus asleep during the move; and enough manpower to move a close to 1,000 pound horse who’s totally konked out from where he lay onto a boat for transportation to the mainland.

Meanwhile, Karen and her crew were mobilizing from the Corolla end, leaving before dawn to meet up with Gus and his handlers. She says that she left Corolla at 4:40 in the morning, and by 10:30 they had the horse on their trailer and were headed to his new home. Finally, 12 hours later, Gus put his hooves on the sand at a predetermined site north of Corolla, his new home.

Again, you might think this was the time to celebrate a completed job, one well-orchestrated and carried out. But, no, we’re not there yet. Let’s go back to imagining ourselves as a horse.

Wild horses are very territorial and generally stay near where they were born their entire lives. So, picture Gus. He’s only 4 years old, so his time after leaving his mom has been spent as a bachelor, since he’s just reaching the age where he could even think about challenging a stallion for mares. He’s been drugged, relocated and wakes up in a strange land where he doesn’t speak this dialect of horse language or understand the culture of this herd. Can you imagine how disorienting that would be? To help counteract this experience for him, Karen made sure his new home was close to fresh water and foliage for a ready food supply so simple survival would be assured. 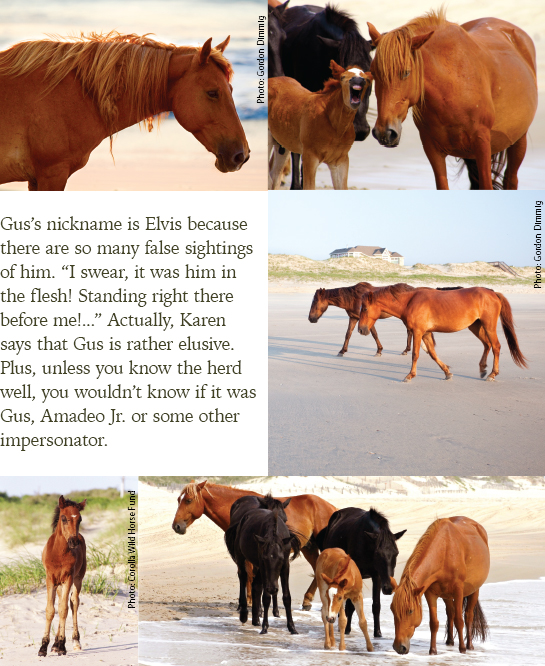 But once his basic needs were met, there was still the question of how Gus would acclimate to stallion-hood. Would he find his assertiveness soon enough to hold his own in the herd and do what he was brought here to do…as in making baby horses with the broader genes? We stated earlier that Gus wasn’t brought here for his good looks, but as it happens, apparently he’s rather attractive to the mares.

Within a very short time, Gus had stolen three mares away from another horse named Amadeo Jr. – cheeky devil that he’s turning out to be. But that little harem wasn’t destined to stand, as in short order Amadeo Jr., who by the way is six years older than Gus, stole them right back. It’s sort of like a high school rivalry now between two popular guys. Who has the mares today is anyone’s guess. For their part, the mares seem rather blasé about it all, passively turning their backs as the two stallions physically challenge each other, trying to assert their superior horsey maleness.

The best news is that Gus’s instincts are leading him toward procreating. No, it’s not always a given. Karen explains that there are bachelor bands of horses that never try to lead a harem. Luckily, Gus is made of more competitive stuff, so we can expect to hear the clippity clop of little colt or filly hooves soon…with that sturdier gene pool coursing through the bloodline. 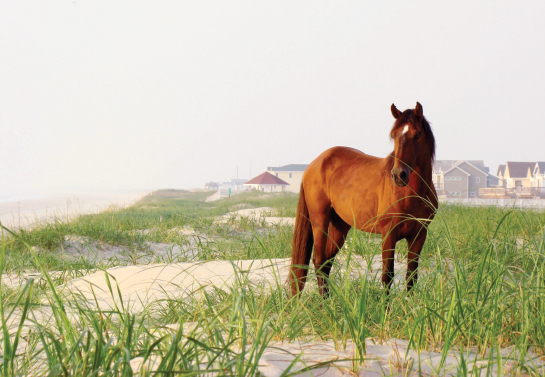 Horses are capable swimmers, as anyone who has ever watched a Western movie can attest. But they sure aren’t endurance swimmers, as Amadeo Sr. (obviously, Jr.’s dad) would tell you if you spoke his language. Luckily, Karen McCalpin, Executive Director of the Corolla Wild Horse Fund, does speak horse, so we are able to hear an amazing story. One day Sr. was being challenged by another stallion for the three mares in his harem. Things weren’t going well, and since horses are fight or flight animals, Sr. fled. 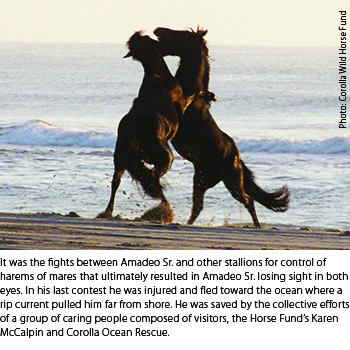 Trouble is, he was already blind in one eye due to a previous injury, and in this challenge his other eye was badly injured as well. He started running and headed straight toward the ocean and directly into a rip current. The current started pulling him out, and eventually 1.5 miles to the south. An observant visitor was savvy enough to know this wasn’t a good situation, and she called 911. They, in turn, called Karen who, in turn, called Corolla Ocean Rescue. Arriving on the scene at the same time as Karen, it was clear to the lifeguards that Amadeo Sr. was in trouble, even though he had, miraculously, found temporary footing on a sandbar. Using watercraft to reach him, they were able to encircle his body with tow straps and finally pull him to safety. He had saltwater pouring out of his nose and mouth when they got him to shore – clearly a close call – plus the water was in the 50s. Amadeo Sr. was in shock, but he was alive.

Since that event, Sr. has lived at the Corolla Wild Horse Rescue Barn, where he is well cared for and secure. He’s now totally blind, but he has an inseparable buddy there named Felix who makes sure his path is clear. Wondering where his name came from? Amadeo means blessed by God in Spanish. I’ll say!