A Legacy of Firsts 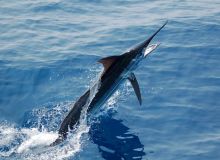 From the first English child born in the colonies to the first powered flight and the first national seashore, the Outer Banks is an area known for its historic beginnings. In 1937, Hatteras Village native Ernal Foster pioneered the industry of sportfishing. Commercial fishing was common on Hatteras in those days, but as hunters and sportsmen filtered down the island Foster found a niche by taking them fishing for sport. What began as one man’s innovation led to a business going strong to this day, one that continues to participate in an exciting legacy of firsts.

In an antique photo the reporter sits in the stern of the Albatross, typewriter open, sleeves rolled up, fingers at the keys. The open water fans out behind him in a V, and even in black and white the diamond-bright sparkle of light dances on waves. He’s writing an article about the new industry of sportfishing. Charter boat sportfishing was slow going in the beginning for Foster (he booked four charters his first year), but business picked up dramatically in the next couple of years. In 1939 a visiting angler, Hugo Rutherford, caught Hatteras’ first blue marlin from his personal boat, but the feat was “lost to the winds of war,” as Foster’s son, Ernie, puts it. (Ernie and his wife, Lynne, now own and operate The Albatross Fleet.) Business boomed after World War II. In 1948 Capt. Ernal built his second boat, the Albatross II, and in 1951 something historic happened. Though the terminology didn’t exist at the time, the effect was the same as today — a photo of a giant marlin caught on the Albatross by Capt. Ernal went viral. 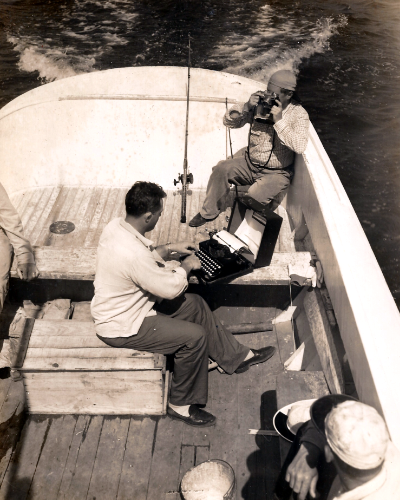 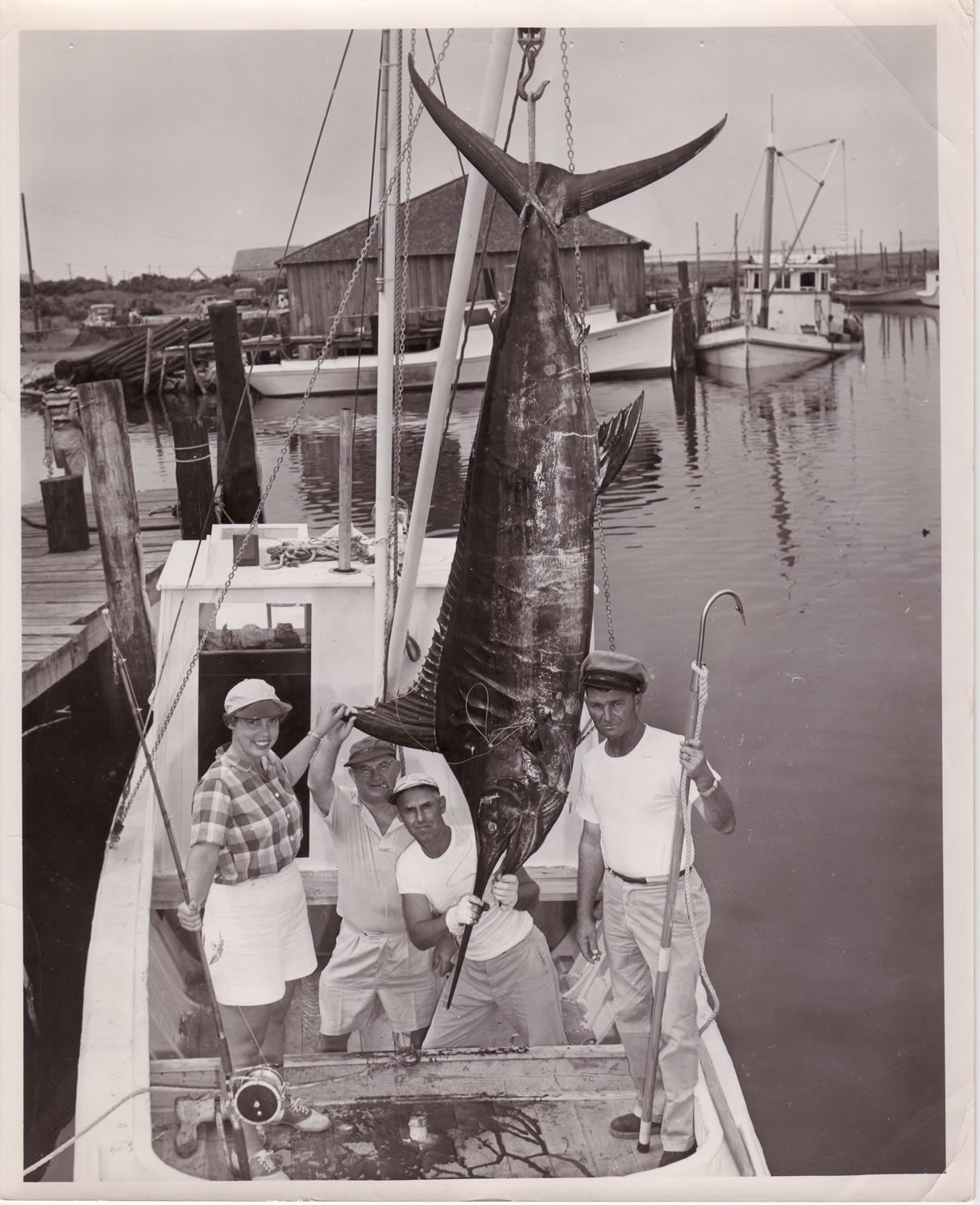 After World War II, leaders in Dare County decided to promote tourism professionally, hiring a man named Aycock Brown as their director. Brown recognized two things: the allure of sportfishing and the power of a photograph. As Brown sent Ernal Foster’s marlin photo nationwide, he initiated a dance between Hatteras fishing charters and the promotion of the Outer Banks. For the first time, fishing was used as a marketing tool. “The idea that you could catch a blue marlin, which was the prize fish, off the coast of North Carolina was a big deal in the billfishing world,” Ernie says. “This fish received massive publicity.” Lynne explains how Aycock Brown would come down and photograph local young women in one-piece bathing suits posing next to the marlin catch to promote the charter fishing world and Dare County. 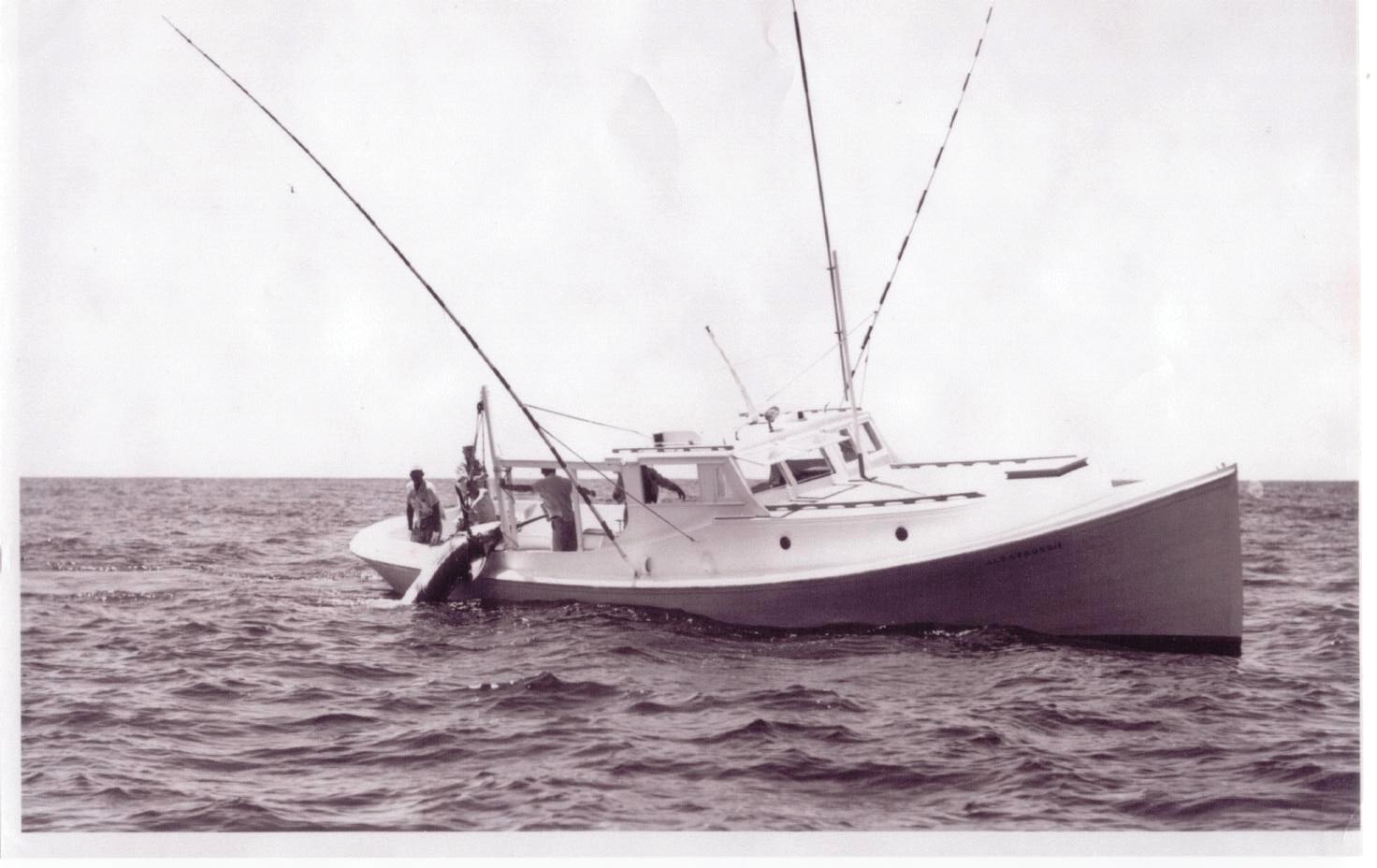 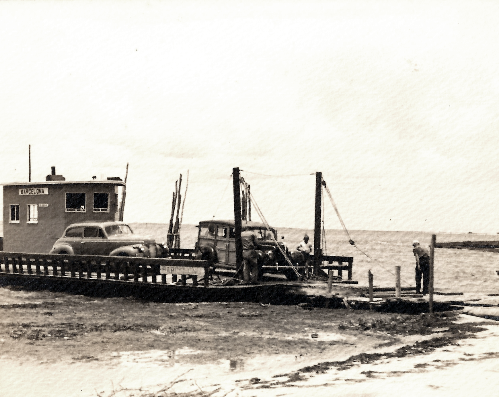 To get to Hatteras, the reporter in the photo would have had to cross Oregon Inlet on a low ferry that only ran during daylight hours, water splashing over the sides during the ride. By 1951 there was a paved road down Hatteras Island (“We were rigged up,” jokes Ernie), but the journey still would have taken several hours. Hatteras was not an easy destination, but when Foster’s marlin went nationwide, “Instantly, Hatteras was the place to catch a billfish,” Ernie says, “so the serious sportsmen started coming down in earnest.” Lynne explains that they’d fish for days at a time to make the trip worth the while. “At that time, very few people came to Hatteras for vacation,” Lynne says. Nowadays Hatteras is a vacationer’s paradise and the story comes full circle, as Ernie Foster is now a member of the Dare County tourism board.

Almost immediately after Brown publicized Foster’s fish, Ernal Foster got a call from a couple in Richmond who came down for two weeks of fishing in 1952. The woman, Mrs. Walker, caught a marlin, and in so doing became the first woman to catch a blue marlin north of Florida. “That became a great promotional tool,” Ernie says. Most of the customers were men back then. “Mrs. Walker really got some attention and made other women think, ‘hmmm,’” says Lynne. Combined with the marlin photo of the previous year, this event further piqued the allure of Hatteras. “All of a sudden it just blossomed,” Ernie says. “Hatteras was the go-to place.”

Business boomed, and in 1953 Capt. Ernal had his third boat built, the Albatross III. Then, in 1958, a couple by the name of Cleveland honeymooned on Hatteras. Avid big-game anglers, the Clevelands booked a charter on the Albatross, captained by Ernie Foster’s uncle, Capt. Bill Foster. When Mr. Cleveland hooked a marlin his next request would rock the sportfishing world. “He caught a marlin and told my uncle to do the strangest thing anybody had ever heard of,” says Ernie. “And that was to let it go alive.” The first billfish ever released alive became another promotional extravaganza for Aycock Brown. “At the time it was a genuine oddity,” Ernie says. “Now if we bring one in it’s weird.” Catch-and-release fishing was born, and along with it came the nascent sense of conservationism in the fishing world. “For Hatteras, that was the beginning of our greater awareness,” says Ernie.

By 1962 Ernie Foster was first mate on the Albatross II. As he set out for a day of fishing he had no idea that he was about to participate in another first for the Albatross Fleet. That day the crew of the Albatross II brought in what was at the time the world record all-tackle marlin, the biggest blue marlin that had ever been caught in the world. This event served to further solidify The Albatross Fleet’s position at the top of the sportfishing world as well as contributing to the burgeoning tourism industry on Hatteras. 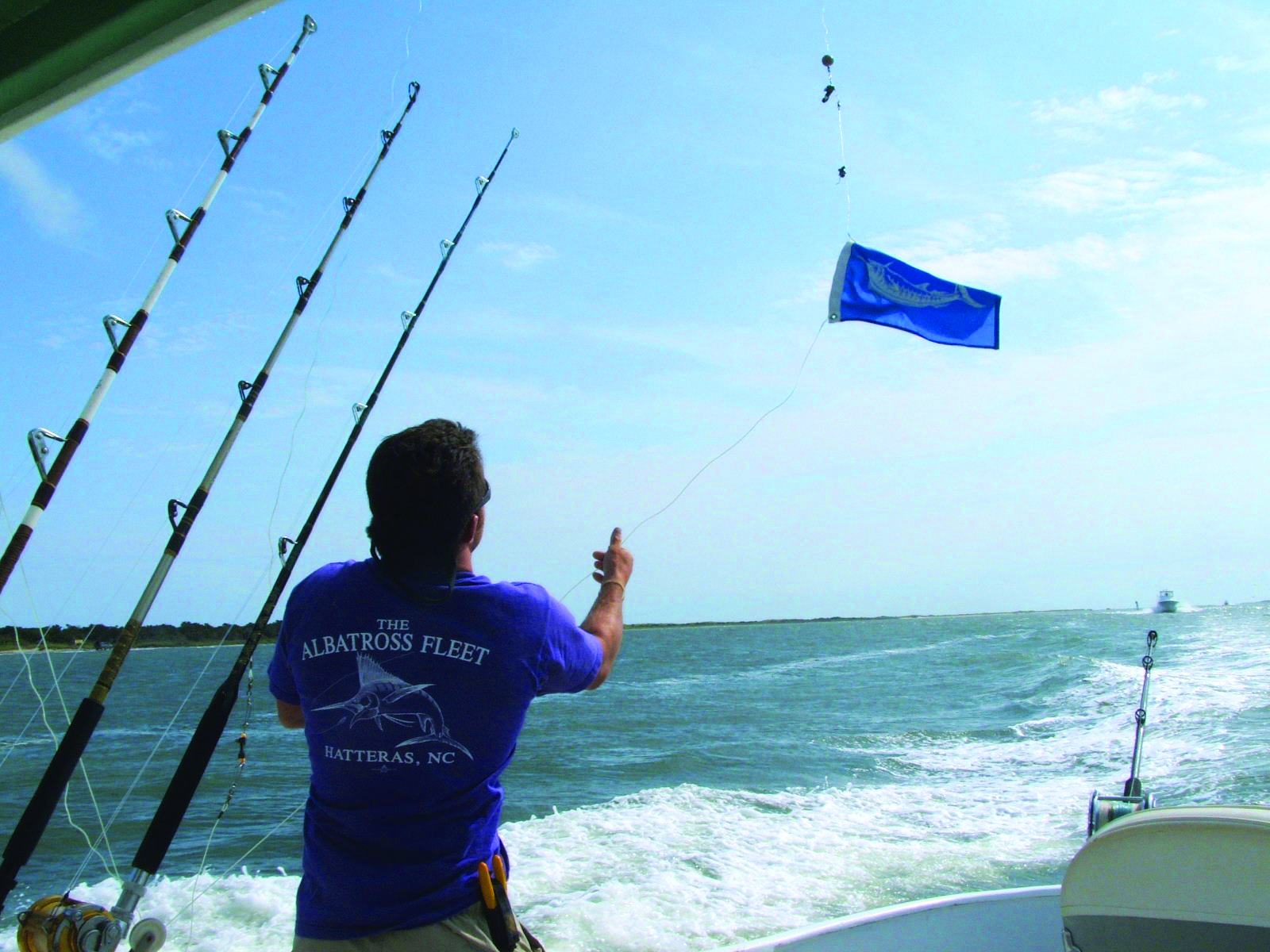 The fisherman in the color photo raises a blue flag indicating the catch of a marlin. Like the antique picture, the water splashes out behind the boat in a curve of white. The fishermen on the Albatross come back to land having participated in a grand tradition, and the excitement is as fresh as it was back in Ernal Foster’s day. “When that fish strikes the bait, there’s the realization that I’m experiencing the same thing that anglers have down through the ages,” says Ernie. “There’s a timelessness about it that resonates as much today as it did back when the first ones were caught.” From Ernal Foster’s conception of sportfishing itself to Aycock Brown’s historic publicity to the beginning of the catch-and-release trend, the Albatross Fleet has been at the forefront of the sportfishing world from the very beginning. When the Albatross leaves the harbor for the Gulf Stream you’re going to want to be on it, because you never know — you could be part of the Albatross Fleet’s latest historic first.