There’s more than one legend tucked among the rolling dunes and peaceful maritime forests of the northern Outer Banks.

Since the time of the first explorers, wild horses have been a part of Corolla’s history. The Spanish mustangs were left behind by settlers hundreds of years ago – once numbering more than 3,000 – and today are one of the greatest draws for visitors to the Outer Banks.

Then there’s the man that makes it possible to see the horses: Corolla Bob, more formally known as Bob White of Bob’s Wild Horse Tours. Along with running a business, Bob’s mission is to raise awareness about the horses and educate locals and visitors about how to protect them.

There are just about 100 horses on the northern beaches today, making the herd critically endangered. But Corolla Bob and those who see the mustangs cantering in the ocean’s shallows or grazing among the dunes know the importance of protecting them.

“My first time seeing them, I was a teenager down here,” says Bob. He had come to the beach with his father, Bob Sr. originally of Richmond, Virginia, to purchase some real estate and recalls the indescribable feeling of seeing a wild horse right in front of him. “That feeling has never gone away.”

It was actually Bob Sr. who started Bob’s Wild Horse Tours by chance. He had purchased a vacation home in Corolla and later moved to the Outer Banks full-time to open the Inn at Corolla Light. He was captivated by the wild horses – although Corolla Bob, a teenager at the time, admittedly didn’t understand the allure of a quieter lifestyle on the Outer Banks. 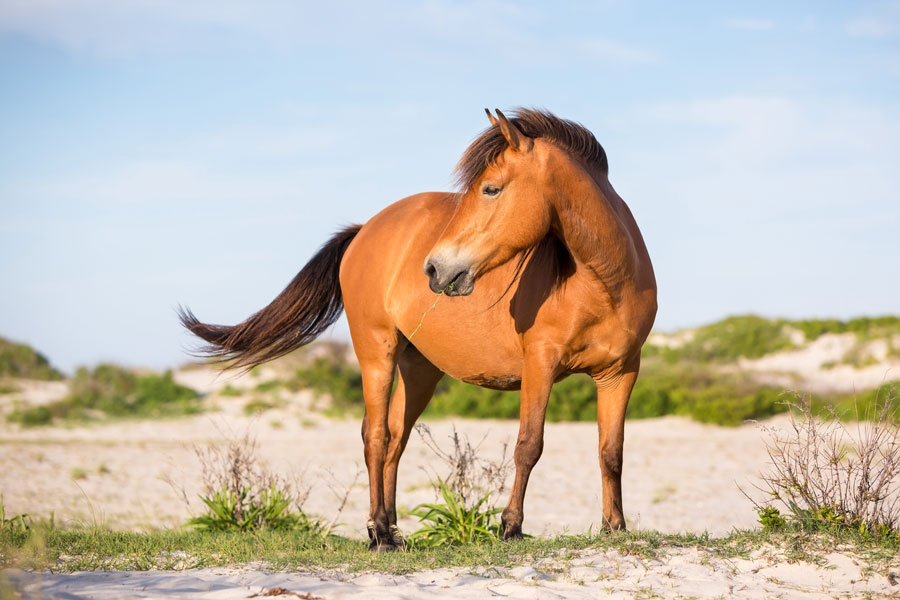 By the summer of 1996, the horses had been relocated from Corolla to a 7,000-plus-acre four-wheel-drive area north of town – meant to protect them from the increasing number of vehicles on N.C. Highway 12. When some guests on the pool deck at the inn asked how they could see the horses again, Bob Sr. loaded up his four-wheel-drive vehicle and took the visitors to the beach. Soon after, Bob’s Wild Horse Tours was officially born.

Bob Jr. headed up the operation, having made his way to the Outer Banks after a few years at large in the world. He moved to “horse land,” as he calls it, because every day he could look out his windows and see the horses grazing and playing. Under his direction, Bob’s Wild Horse Tours was the first company to make the switch from Suburbans and pioneer the open-air, safari-style tours that are popular today in Corolla.

More than 20 years after its founding, Bob’s Wild Horse Tours is still taking visitors to the four-wheel-drive beaches to see the wild colonial Spanish mustangs roam. The open-air trucks transition easily from the paved road to the beach and offer a view from about 8 feet in the air. They let you see the beach clearly and smell the saltwater during the two-hour trip.

The horses move upwards of 20 miles each day, so the first step is finding the herd. But the local guides at Bob’s Wild Horse Tours are familiar with these movements and the rolling landscape of Carova. Along the way, they will talk about Outer Banks folklore, point out other local wildlife from ospreys to wild boars and share facts about the horses. (To start, the Spanish mustangs are the North Carolina state horse.)

Finally, you see them standing tall atop the dunes or walking along the shoreline. They’re beautiful and wild. Bob says there is a sense of awe particularly the first time that visitors look upon the horses. It’s something you can’t quite put into words.

“I always thought it would be a one-time thing,” he says, but he was dead wrong. “We have customers that come several times a summer.”

The guides know the horses by name and will discuss different family groups and activity in the herd. If you head to the northern beaches in 2020, they may even point out one of the new foals that was born earlier this year. The first is a bay with two socks and a star marking, so keep an eye out.

“Because we have diversity in our guides, each trip is unique,” says Corolla Bob, noting how different guides have different stories to tell. “Each guide makes the tour his or her own.”

One thing that is consistent between tours is that the guides impress upon guests the importance of staying at least 50 feet away from the horses and never feeding them. You can feel free to photograph the horses and enjoy them at a safe distance, but it’s important to remember that these animals are wild. Even foods typically thought to be treats for horses can be deadly to the Outer Banks mustangs that were raised on a diet of grasses.

That’s part of the reason the Corolla Wild Horse Fund exists. In the mid ’80s when the stretch of road between the villages of Duck and Corolla was paved, it was apparent that there was a serious need for an organization dedicated to the mustangs. The early founders of the Fund moved the horses north and constructed two ocean-to-sound fences to keep them from wandering back into Corolla. 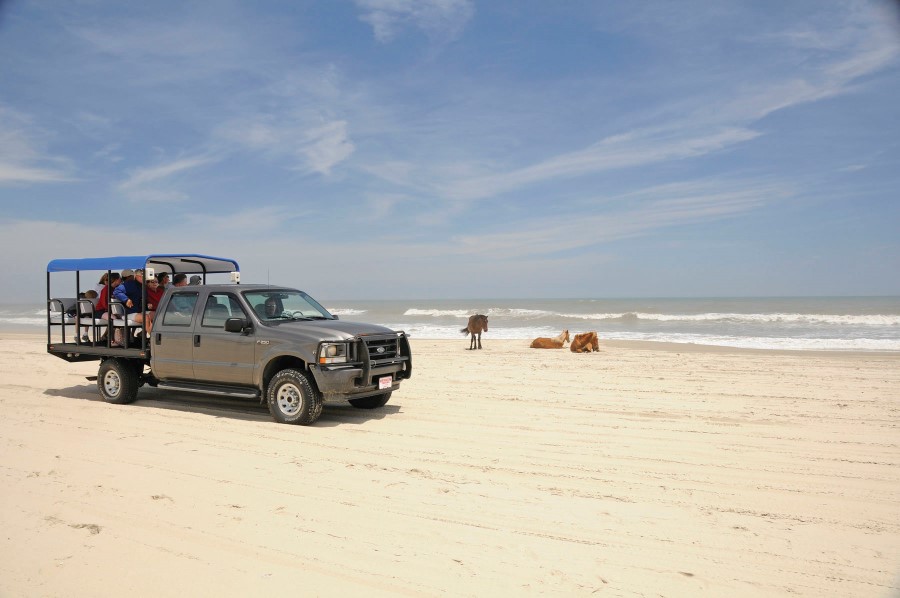 The sanctuary is designated for the wild horses, but it’s actually a mix of public and private land. So for locals who live in Carova or visitors who spend a day at the beach, the mustangs are a common sight.

In his free time, Corolla Bob serves on the Corolla Wild Horse Fund Board of Directors. He feels connected to these animals that are part of the spirit of the Outer Banks and wants to advocate on their behalf. Protecting the horses and sharing some of the magic with visitors has always been at the heart of what he does. It’s why he has become such a fixture in Corolla himself.

“For me, it’s always been about the memories that we make for these people,” he says of the guests of Bob’s Wild Horse Tours. “We have touched their lives in some way, shape or form with a memory that will stay with them for many years to come, if not forever.”

To see the wild Spanish mustangs of the Outer Banks for yourself, just join a tour and head to where the paved road ends in Corolla.