In the restaurant world, once you’ve hit the 10-year milestone, you’re considered a success. So what does it mean when you get to 30? There’s no questioning your value to loyal diners at that point, no wondering if you’re doing it right, absolutely no worries about whether your concept of good food and drink is working.

It’s been working for the Blue Point since the day they opened their doors in 1989.

If any of you readers are lucky enough to have experienced the restaurant during those early times, you undoubtedly have many fond memories and stories to tell. I remember everything about the first time I went that first year: the checkerboard floor, the red-seat bar stools (and there were only five or six of them), the tiny kitchen, the small dining room (only 50 seats, and that was including the couple of ones outside on the deck, compared to the 116 today), the jazz that was playing (not your typical local experience in those days), the handwritten menus, the view of the sound, the cigarette vending machine. But two things stood out the most. One was this sense that we were participating in We Knew Them When history … because there just wasn’t any question that this place would make it. The other was, of course, the food. 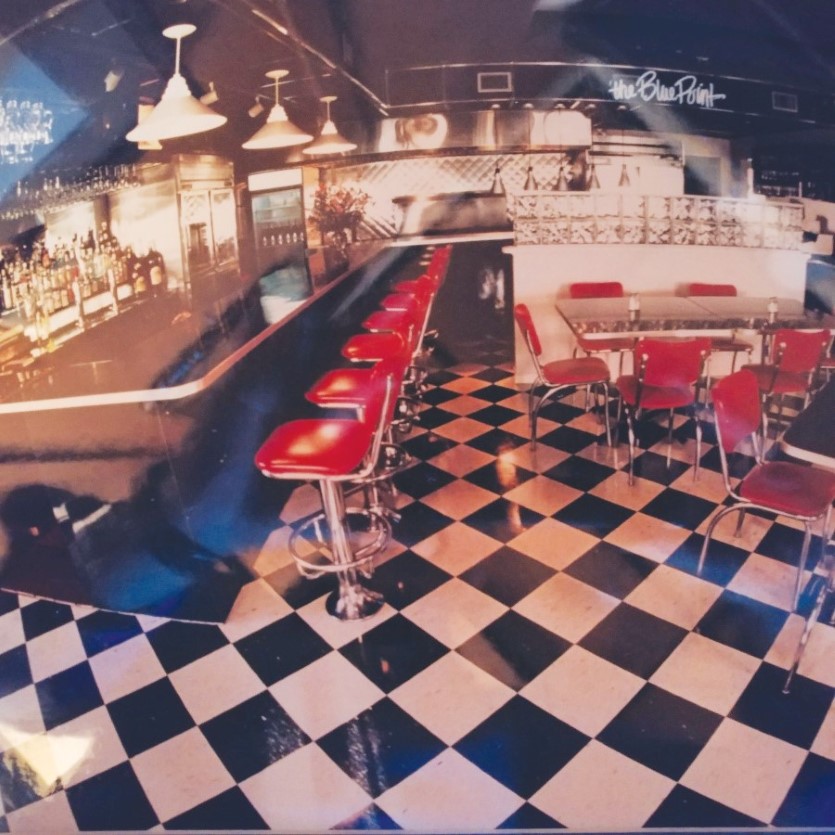 The food. As John Power and Sam McGann, the two visionary owners, explain, the commitment was always to incredible food paired with exceptional wines. But lots of would-be restaurants promise something of that same thing when they open then never really deliver. But the Blue Point’s food was different. It was foodie food, it was food like no one who dined out on the Outer Banks had ever experienced before. As the fellows like to laughingly say, it was fried-free food. Yes, that was true: You definitely would never find a fried anything served there. But it was still more than that. It was this creative combination of flavors, textures, colors and aromas that set the height of the dining bar at that point in this area. Every time you went, the menu was different depending on what Sam was experimenting with that day, and every time you left you spent the ride home wondering how in the heck he knew that pairing X with Y would be so delicious.

There was something else too. Call it Southern hospitality, but then immediately suspend the sappy version of it that might come to mind. Sam explains that both he and John grew up in Norfolk in an era when graciousness permeated entertainment. And, at its core, that’s what both of these guys understood they were doing every night – inviting guests over for dinner for a wholly satisfying and entertaining evening. As such, they set the expectation and standard that made each guest feel welcome, feel that it mattered that you chose to come to their dining room instead of going somewhere else. The result was that the Blue Point quickly became your go-to restaurant because it just felt (and tasted!) so good when you were there. 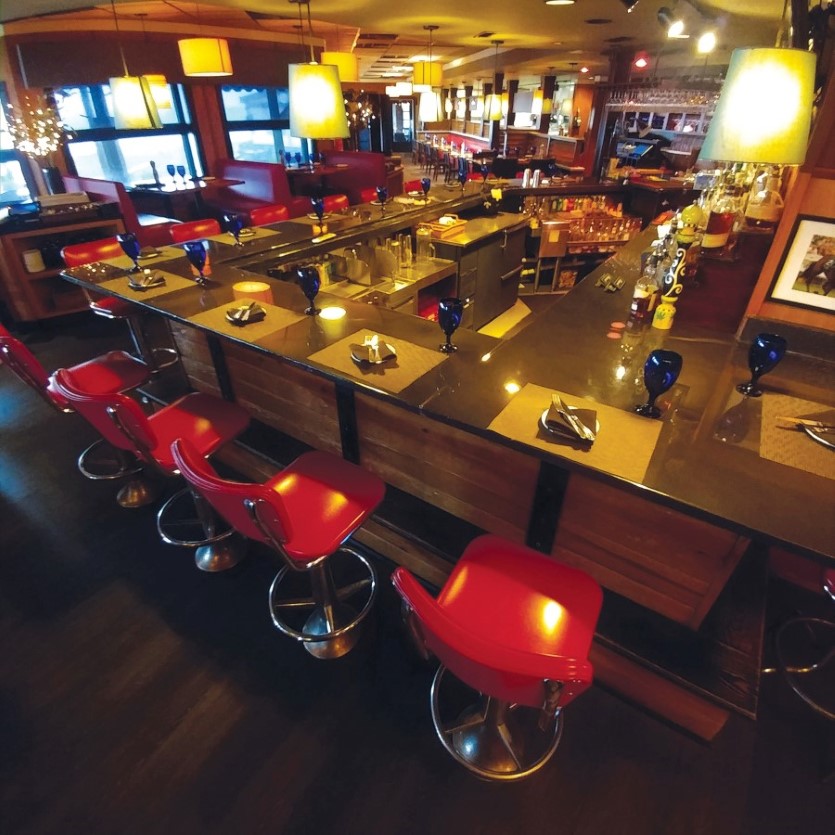 From the start, there was yet one more thing that helped ensure the Blue Point’s success, and that was a commitment to being a year-round restaurant, which, in turn, situated them as an integral part of the community. At that time in the Outer Banks’ history, the vast majority of restaurants were seasonal. While this made some economic sense, it left quite a hole in the local dining experience during the off-season months, and both John and Sam felt it communicated something other than hospitality. They wanted to be there for their guests all year long so that, even in the middle of winter, locals and visitors knew they could count on the Blue Point to be open. Before 1989 you might have found a deli and a hot dog stand open during Duck’s off-season, if you were lucky, but the Blue Point changed that and, in many ways, put Duck on the culinary map. Sam puts it well when he says, "The Blue Point and Duck have grown up together." He is quick to credit their location at The Waterfront Shops for their success as well. "We are fortunate to be a part of the soundside development created by the Braithwaite family."

Another benefit of their year-round commitment has been the stability it has provided their staff. This was – and still is – a big deal to John and Sam. Rather than having an ever-evolving staff that had to be trained each time in how to provide exceptional service as well as how to comfortably add their own personality to that concept of hospitality, the servers, managers and sous chefs have stayed remarkably consistent here. For example, Nancy Stanford, with whom you’ll likely speak if you call for a reservation (and who will, more than likely, remember you if you’re a repeat diner as well as where you typically like to sit), has been there for 16 years. Five of the servers have been at the restaurant for more than 20 years. Elaine Piddington, lead server, and Dave McClary, chef de cuisine, were there the day the restaurant opened! John explains that having a job in a restaurant of the Blue Point’s quality, where staff can count on having a full-time position, creates incredibly reciprocating loyalty. In fact, for the entire time they’ve been open, he says, very few members of the waitstaff have left them for another local restaurant.

Yet many have gone on to open their own restaurants, a true badge of honor for both John and Sam. As they’re explaining this fact to me, their passion for teaching and paying it forward with dedicated staff members is palpable. I’m tempted to say that they wax poetic about the importance of being role models and deeply caring about the future of staff members who have meant so much to them personally and to the restaurant’s success. But, at its core meaning, waxing poetic feels too artificial of a description for the sincerity they impart. 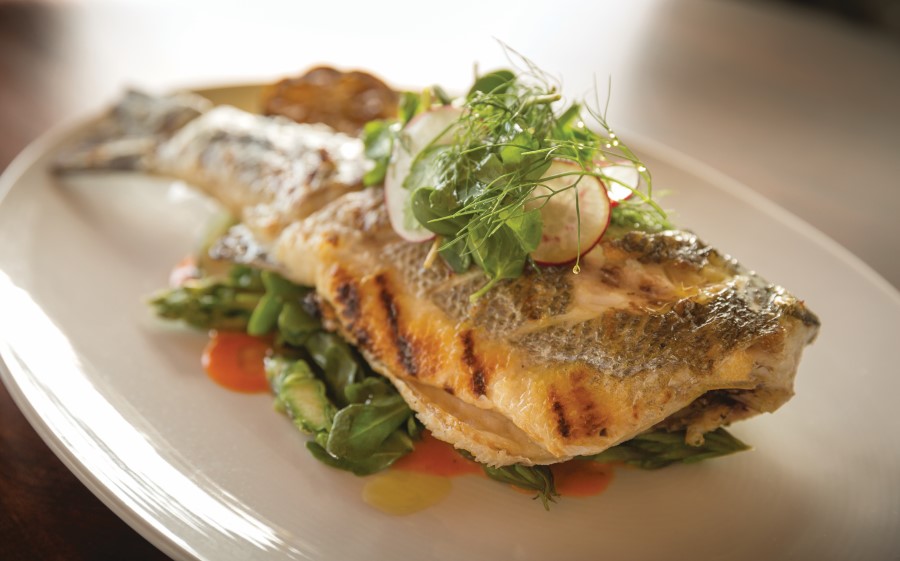 Through the years there have been structural changes, as you would expect. A screened-in porch was added a few years after they opened that gave them 16 additional, much-needed seats. The expanded restaurant that you see today was finished in 2006. A few years back they added a reservation system. In 2016 they added the Back Bar, giving the restaurant an inviting outdoor place for guests to grab a drink, relax in an Adirondack chair and enjoy the waterfront view (sunsets … did we mention the sunsets you see from the Blue Point’s back lawn?!). Sections of the Back Bar can be rented for an event, but while the weather is warm enough, which it is for all but about four months of the year, it’s always a popular gathering spot. And now, thanks to a pier added last year, you can even arrive for dinner and drinks from the soundside and tie right up.

Another key addition has come in the form of Simon Kaufmann, the bar manager, who brings with him the title of Advanced Sommelier. Since there are fewer than 300 men and women who have earned this title in the United States, Simon’s contributions to the Blue Point’s slogan of Good Food + Good Wine have ratcheted up many fold. He’s soon to sit for the Master Sommelier exam, gaining him entrance into an elite group of fewer than 250 people worldwide with such widespread knowledge of every aspect of wine culture.

When I ask John and Sam to envision five years down the road, they both take a pause to think. Then Sam says, “I think I see us the same but better since we learn from our guests all the time. But what I also see is simple gratitude that we get to do what we both love to do night after night. It’s almost like throwing a party every time.” 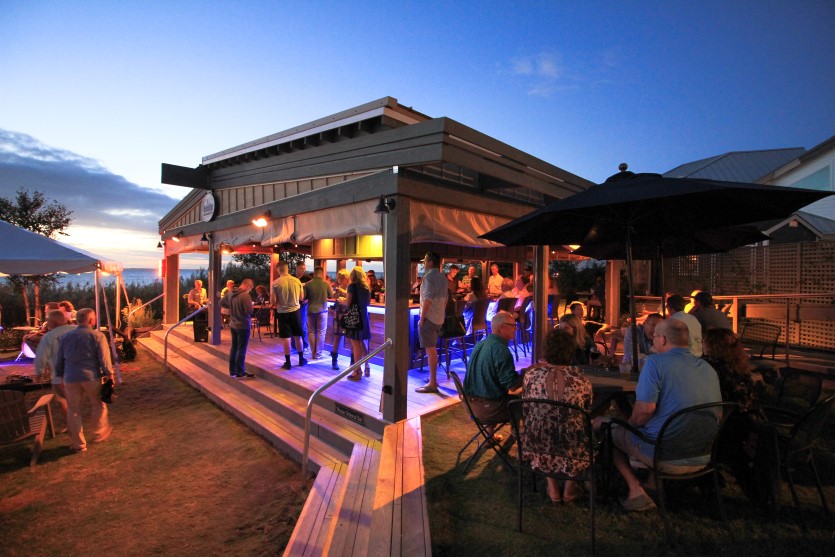 That’s the Southern hospitality thing that’s in their genes. They’ve run a successful restaurant for 30 years, and what we all experience, every single time we go there, is that they’re as thrilled to welcome us to the Blue Point on our first visit as on our 100th.

Buy Small Coffee, and Upgrade to Medium for Free

Pay for a Small Coffee and we upgrade you to a Medium!