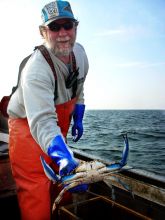 Callinectes sapidus. Those two Latin words have a definite lyrical roll to them, but I must say I like our English translation better - savory beautiful swimmers. It's perfect for the blue crab, isn't it! How many times have you watched them maneuver in the water, seemingly able to travel four dimensions at once with those flipper fins?

All I'd even done before is dangle a line with a chicken neck attached and catch the little buggers then steam them up with Old Bay and have a feast. I really hadn't put much thought into them as creatures. Which is interesting to me, because I generally think about creatures a lot. But, I guess their somewhat prehistoric look (how much have they evolved in the past thousands of years in terms of their appearance?) didn't endear them to me. Plus there's the feisty way they snap with those big front claws that tended to keep me at a distance.

I guess if someone was trying to catch and eat me, I'd be a little snappy too.

And they get eaten a lot. They're among the most heavily harvested creatures on the planet, due obviously to their incredibly tasty sweet meat. (As with an oyster, don't you wonder about the first brave person who ate one of these things?! "No, really! Try it! All you have to do is break it open, pick through that yellow gunk and find that white meat...no, not that! That's a lung. Hey! Come back...you'll learn to love these things!") And now we can't get enough of them, strange tribe that we are. 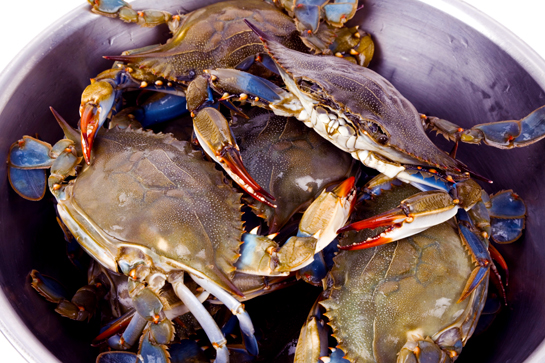 Blue crabs get their name from that gorgeous cobalt line along their front claws. The rest of their bodies are rather dull in color. But did you know that you can tell females - even before you turn them over - by the red tips on their pincers? Red fingernails. Male's tummies have a narrow abdominal apron, while females have broad ones. All together, they have 10 legs, two of which are those cool, flat directional ones.

Male crabs can reach nine inches in shell width and can weigh up to two pounds. Female blue crabs mate only once in their lifetime, which can last up to three years, and can produce up to 8 million eggs in their lifetime! 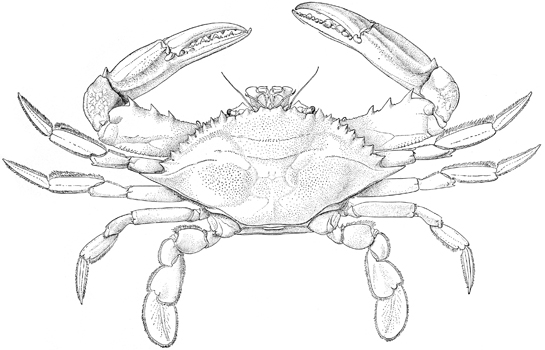 They feed on just about anything, which is why the above-mentioned dangling of a nasty raw chicken neck by a string into their watery home attracts them over for a bite. But, other things they consider delicacies are their own kind (the small ones), snails, fish, plants and mussels. They're not picky, as omnivores tend not to be, but this also points to one of the reasons these crabs are under strict management controls now. As their environments become more and more polluted, blue crabs don't fare very well - well, what species does, for heaven's sake? This means that if we want to continue with the summer tradition of crab pickins, we better become more aware of our impact on their environments.

These savory beautiful swimmers are found from estuaries in Nova Scotia all the way down through the Gulf of Mexico and beyond to Uruguay. Luckily, we're about in the middle of that area, and indeed we are blessed with an abundance of these crustaceans. If you're not from the Outer Banks, you might not realize that all those colorful foam bobbers out in the sound are attached to crab pots below - crabbing is a big business here. It goes without saying that you don't mess with someone's pots, but you might be lucky enough to be out on the water early some morning and see the crabbers emptying them into their boats. 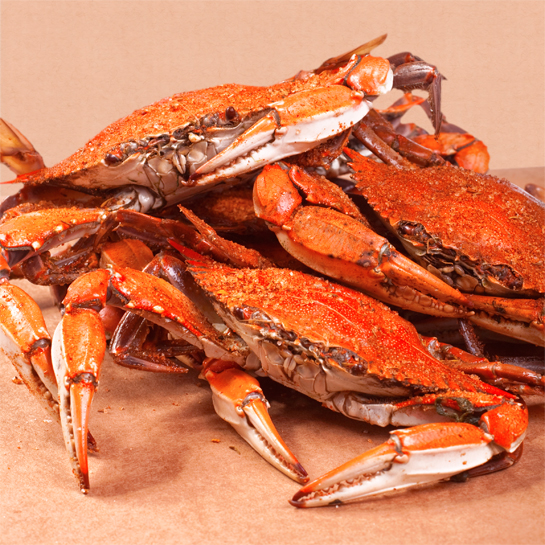 And, you've experienced a tried and true Outer Banks summer tradition if you go buy a bushel or two of them, spread newspapers over an outdoor table (for easy cleanup - the shells go everywhere), get some hand crackers (such as you use to crack pecans) and spend hours digging the sweet meat out of the shell and eating. It takes a while to get a full belly, but that's part of the fun in spending time with those you love, picking, talking and enjoying life. Some of you will be thrilled to know that an entire cup of crabmeat is only 112 calories, and it gives you 24 grams of protein and 0 grams of carbs! Yea...you're right... all those beers you drink kind of make up the difference.

Callinectes sapidus...savory beautiful swimmers. Makes me wonder if sharks have some similar name for us humans!

How To Eat A Crab!

Be prepared. Eating crabs is messy but the mess is worth it! Steamed Blue crabs are deep red and are usually covered with special seasoning to enhance their flavor. Click here to check out our article on how to eat a crab!