In Search of Adventure 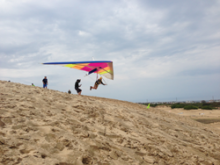 Kitty Hawk Kites may have been established long before 1974 if the Wright Brothers had stayed here. Instead, it took co-founders John Harris and Ralph Buxton to figure out how to make the glider business fly off the Outer Banks. Known today as a national leader in the adventure tour industry, Kitty Hawk Kites has come a long way from its humble beginnings in a rented space at the base of Jockey's Ridge.

For those who have visited the Wright Brothers Memorial and peered into the camps whose walls kept out the elements that couldn't make it inside, it wouldn't be hard to relate to a time much later when inspiration, hard work and dedication were housed in similar circumstances. A rented garage served as the first full-time hang gliding school and shop on the East Coast. T-shirts and Mylar kites covered walls with no insulation. It did, however, have an outhouse.

Forty years can be more than a lifetime for some. For Harris, the time seems to have flown by. From the start, others have been there to steady his wings: friends who became partners, acquaintances that became mentors, students who became pilots, then instructors and 1974, Harris was the first to fly a glider from Grandfather Mountain, Linville, NC, at the Highland Games. Morton published his picture of the take-off and fell, along with Harris, for the sport. After that, events soared. Harris returned there the next year to serve as chief judge for the US Hang Gliding Association National Championship. In 1976, he directed the Grandfather Mountain Masters Competition. Harris remembers Morton as fearless. "He was not afraid of anything or anybody. From him I learned about events and marketing and promotion." 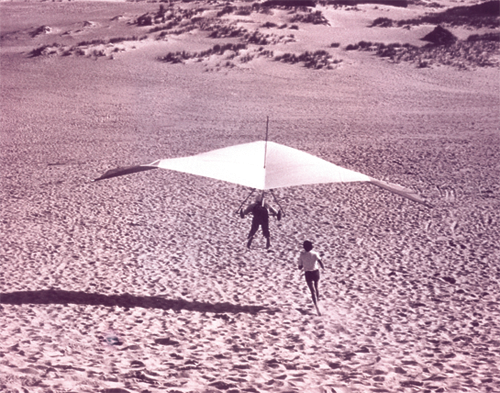 Meanwhile, business on the Outer Banks allowed Buxton, an engineer with Westinghouse, to make a move from Maryland and weekends to full-time work. Harris credits Buxton for his business acumen. "He was a good planner and kept our finances on track," In the meantime, they were hiring male and female instructors and making a training film. And Jockey's Ridge, through the efforts of many, had become a State Park. Buxton and Harris built a new building with a tower, retail space and hang gliding schools wedged between the Beach Road and Bypass. They soon acquired the adjacent property, site of the old thousands of people who have traveled to the Outer Banks in search of that feeling of adventure that Harris wants to share. Today, it's not just about the flying-it's about making any outdoor experience as safe, exciting and memorable as it can be.

To understand this, you have to know a bit more about Harris. His passion for personal flight has been an inspiration for others, and along the way others have inspired him. He bought a glider in 1973 when he saw a picture of one in a newspaper. He learned to fly with Buxton and other friends on Jockey's Ridge. It seems silly today, but seen through the eyes of the uninitiated at a distance, it appeared that through the summer heat's shiver, the high dune behind Jockey's Ridge was dotted with errant ants and frivolous, colorful butterflies. They loved this new, exhilarating activity! But, who else in these parts even knew about it? In the early days, it was about those who had the vision, or patience, to hear his story.

If you owned a mountain back then, what kind of plea would you consider to let a young John Harris be the first one to jump off of it? Hugh Morton, developer, promoter and visionary, was curious and open-minded enough to listen. In July of Casino nightclub, for future expansion of Kitty Hawk Sports to meet the demands of water enthusiasts. In the midst of a recession in 1981, the interest on their loan was 20 percent. 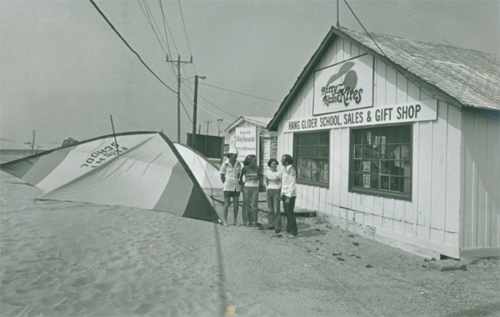 And then there was Francis Rogallo, the humble engineer who invented the flexible wing that bears his name. Rogallo worked at nearby Langley Air Force Base at NASA for 30 years in research and engineering, running the low speed wind tunnel. A few weekends after opening their shop, Rogallo stopped by to see what the boys were up to. Harris remembers him as gracious and generous with his time. "He loved to see people fly," Harris recalls. "He was supportive of what we were doing and not only ignited passion in the pilots he talked to but also helped to prolong ours when we ran into difficulty or got discouraged." It had taken Rogallo a decade of education and promotion until his invention of 1948 finally took off. When the space race began, a newly created NASA received the gift of his patent--a design from which he never received royalties. The Rogallo Tower, built in 1979, stands in his honor. Harris hopes that the Rogallo Foundation he supports will one day house a museum to share what he knows about this friend and mentor.

One can imagine that in 40 years of business, there are a lot of ups and downs. Harris obviously prefers the lift to the downdrafts. Concerns about increased liability over 20 years led to help from Robert Wells, who established First Flight Insurance Company in 1993 when Harris' current underwriter landed belly up. The new company set safety and instructor standards, provided insurance to other schools in the business and facilitated the opening of other sites for Kitty Hawk Kites and the hang gliding industry. Three years earlier, Buxton and Harris had separated their interests. Kitty Hawk Sports, which had catered to the popular wind surfing and surf apparel market, had grown with the watersports craze. Harris bought it in 2010 and rebranded it as Kitty Hawk Surf Co., adding three more locations to the 13 opened over the past two decades.

Running so many reservations, especially for simultaneous flights at different altitudes, sounds a lot like flight control. Marc Jorrens, a kite boarding instructor and computer programmer, was asked by Harris in 2005 to develop an online reservation system. That effort launched another business, Outbound Software, which serves as an industry standard for online reservations, ticketing and rentals. Now led by Jorrens, the program is currently used by Planet Fitness and the Corning Glass Museum as well as the North Carolina Zoo and Aquariums, among others. With that system in place, Kitty Hawk Kites is able to schedule a catalog of adventures with more partners for more people looking to find fun.

One wonders how Harris keeps his feet on the ground. Most of the time these days, he admits, it is one in front of the other. The lift he gets most often, except for an occasional glider flight, is in helping others find their own personal adventure. And he misses teaching. With a staff that swells to 350 in the summer season, his focus now, with the opening of a Virginia Beach store last year, is to refine his current operations.

When Harris surveys his 18 locations that now stretch from New Hampshire to Florida; however, he can't help thinking about where else he may land. "Perhaps Georgia or South Carolina", he says. "There are opportunities there." One shouldn't be surprised. Before John Harris flew off the cliff at Grandfather Mountain, he took a practice flight from a more forgiving Hump Mountain, NC. He landed in Tennessee. That day, like many others for Harris, was one more step toward 40 years of adventure and making spirits soar on the Outer Banks.

Save 10% when you rent any beach bike or e-bike!