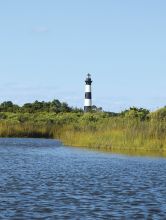 But on the other side of the barrier islands is an entirely different watery world – a smaller, calmer, shallower, less salty and dramatic but no less alluring or enchanting body of water we call, simply, the sound.

Spanning the reach between barrier island and mainland, the sound is an enormous lagoon of flooded coastal plain, a brackish blend of both saltwater from the sea and freshwater from inland rivers.

It’s a world of wonder: open, shallow water run through with sloughs and channels and dotted with islands, sandbars and shoals. At its fringes are a wide variety of habitats – dunes, salt marshes, sandy beaches, mud flats, stands of cypress, pocosin and maritime forest, along with human developments and landscapes. While vacationers tend to prefer the excitement of the oceanside, Outer Banks residents mostly live closer to the shores of the sound, where the conditions are less salty, less harsh and more hospitable for everyday life.

While our simple moniker, the sound, lumps the waters into one amorphous, generalized blob, these waters have a name – the Albemarle-Pamlico Estuary. It’s a complex estuarine system that is technically divided into eight major sounds, five of which are on the northern Outer Banks – Albemarle, Pamlico, Croatan, Roanoke and Currituck. South of Ocracoke, in Carteret County, are Back, Bogue and Core sounds.

The entire watershed, including the six rivers that flow into the sounds (Pasquotank, Chowan, Roanoke, Tar, Pamlico, Neuse and White Oak), is the second-largest estuarine complex in the lower 48 states, second only to the Chesapeake Bay. According to the Albemarle-Pamlico National Estuary Partnership (APNEP), it encompasses more than 31,000 square miles, and its habitats and ecosystems include 3,000 square miles of open river, sound waters, salt and freshwater marshes, forested swamp, oyster reefs, submerged seagrass beds and tidal flats. In all, says APNEP, there are 9,115 miles of shoreline in the system, 1,106 of those miles in Currituck County and 969 miles in Dare County.

Estuaries are one of the earth’s most productive ecosystems. The places where the salt and fresh waters meet and the waters interact with the land create an incredibly important fishery resource for many of North Carolina’s fish and shellfish. The estuary acts as a nursery for the juvenile states of many species of fish, including some that spend their entire adult lives in the ocean. APNEP says that 95 percent of the state’s seafood species, such as shrimp, fish, crabs and oysters, depend on estuarine waters for their survival. 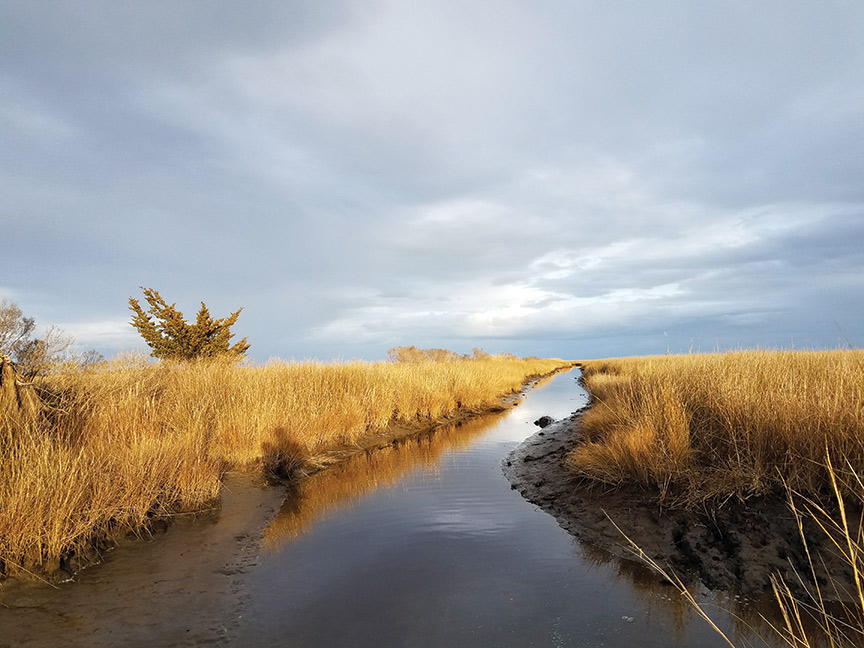 If you ever have the chance to pull a seine net through the shallow sound edges, you can see evidence of this for yourself: Along with bits of seagrass and flotsam, you’ll scoop up infant and juvenile fish and shrimp, miniaturized versions of many of the fish that make their way to our plates.

In fact, in providing habitat for the commercial and recreational catches, the North Carolina sound estuaries produce more food per acre than farmland. Spend time on the sound and you’ll see the commercial fishermen at work here: crabbers pulling their pots in the early morning light, shrimpers in low-slung trawlers dragging their enormous nets, commercial fishermen tending nets and oystermen at work in modern oyster farms.

The sound environment is also an important sanctuary for birds and wildlife. The islands of the sound provide safe rookeries for brown pelicans, herons, egrets, ibis, terns and more, and some of the sound islands that serve as bird refuges are closed to humans by bird-conservation organizations for this reason. The birdlife around the sounds is astounding. Hundreds of species have been sighted in, on and around the sounds, and bird sightings are guaranteed around these waters – brown pelicans dive bombing for fish, white egrets resting in the branches of cedars, tall blue herons stalking fish in marshy edges, osprey guarding nests on channel markers, black skimmers swooping along the water’s surface and so much more. These waters are also vital wintering grounds for ducks and geese.

In supporting plant and animal life, tourism and recreation, the Albemarle-Pamlico system is crucial to the economy of the Outer Banks. According to APNEP, the economic benefit of the sounds, in relation to recreational and commercial fishing, jobs and tourism, tallies into the billions.

No matter where you are on the Outer Banks, you’re never far from the sound, and once you get to know it, you will definitely be captivated by its charms. 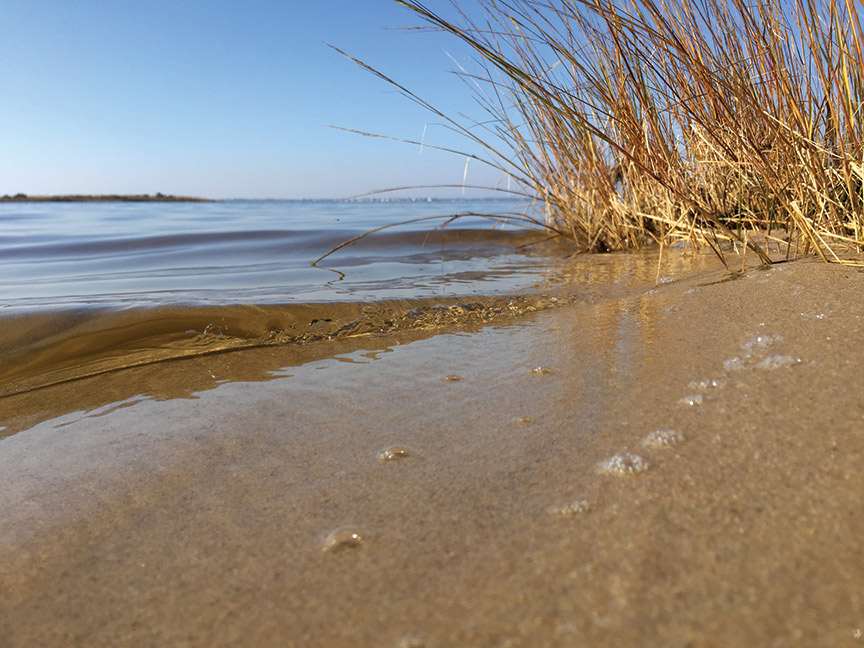 Albemarle Sound
The Albemarle Sound is on the northernmost Outer Banks and actually includes the smaller Currituck Sound, Croatan Sound and Roanoke Sound. The Albemarle Sound stretches from the top of the state in Currituck County, connects to Pamlico Sound south of Nags Head and is more than 50 miles wide as it reaches deep into inland North Carolina.

The eastern border of the Albemarle Sound is Bodie Island, the northernmost barrier islands of the Outer Banks, which actually connects to Virginia. All the northern Outer Banks towns and villages – Corolla, Duck, Southern Shores, Kitty Hawk, Kill Devil Hills, Colington, Nags Head, Manteo and Wanchese – sit along this sound, as does the Dare County mainland and inland towns like Columbia and Edenton. So if you’re on the northern Outer Banks watching a sunset, you’re looking out over the Albemarle Sound. Four bridges cross this sound on the Outer Banks, two from Manns Harbor to Roanoke Island, one from Roanoke Island to Nags Head and one from Currituck County to Kitty Hawk.

Croatan Sound
Croatan Sound is a small sound that lies between mainland Dare County and the west side of Roanoke Island. When you travel to the Outer Banks from the west on U.S. Highway 64, this is the sound you see first as you cross the bridge from Manns Harbor.

Pamlico Sound
Pamlico Sound is the largest of the local sounds and is, in fact, the largest sound on the East Coast. Around 80 miles long and 30 miles wide at its widest point, this is the body of water between Hatteras and Ocracoke islands and inland regions of Hyde County and Pamlico County. It’s so wide that in 1524, Italian Explorer Giovanni da Verrazzano mistook it for the Pacific Ocean because of its separation from the Atlantic Ocean by the barrier islands. Because of its width, the sound is subject to wind-driven waves and can resemble the ocean at times with rolling breakers. The Pamlico is surprisingly shallow, with an average depth of 5 to 7 feet, and its deepest point is 26 feet. Fed directly by three inlets – Oregon, Hatteras and Ocracoke – the Pamlico has a higher salinity content than the Albemarle Sound.

What’s in a Name?

The term sound is derived from the Anglo-Saxon or Old Norse word sund, which also means “swimming.” The word sund is also documented in Old Norse/Old English as meaning “gap” (or “narrow access”), which makes sense as the sound fills the gap between the barrier islands and the mainland.

Except for the Albemarle, which was named after the First Duke of Albemarle, one of the eight Lord’s Proprietors who governed the region in the mid-1600s, the local sound names stem from the region’s Algonquian Indian roots. Algonquian Indians, a large population of Native Americans who occupied coastal areas from Canada to North Carolina, lived along these sound shores, growing beans, corn, gourds and tobacco, and fishing and hunting. 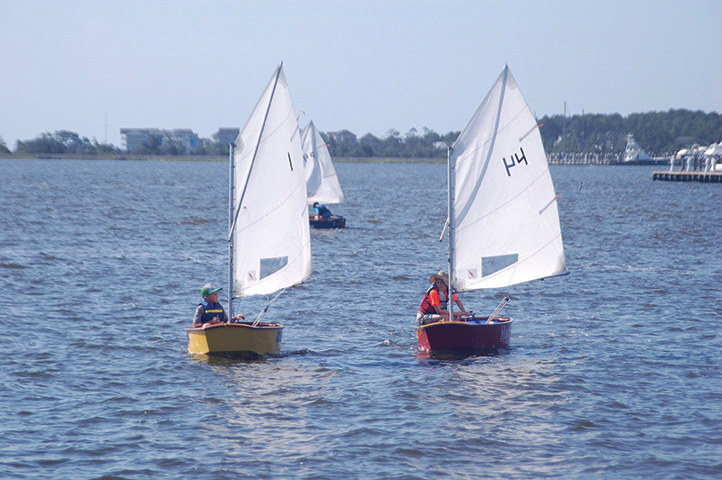 The best way to learn about the Outer Banks sounds is to get in, on or around them. They are a nature lover’s paradise, a fisherman’s mecca and watersports enthusiasts’ dream, all rolled into one. Here are some of the favorite soundside activities.

Dolphin Tours Bottlenose dolphin live in the lower Albemarle Sound and in the Pamlico Sound. An almost surefire place to see them is between Oregon Inlet and Roanoke Island, which is why there are several dolphin tour companies operating on Roanoke Island and in Nags Head. 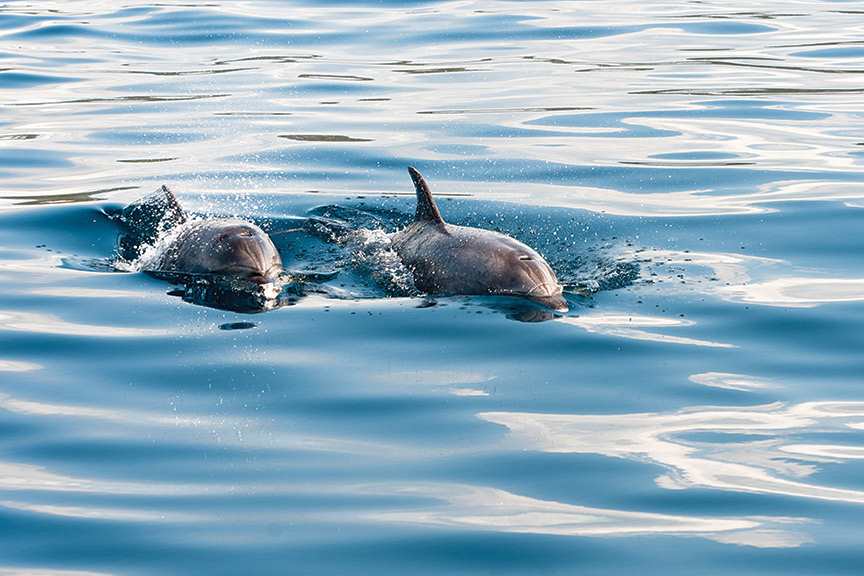 Boating Whether you bring your own boat, rent one from a local outfitter or take a boating or sailing tour with a guide, there are many ways to stay entertained on a boat on the sound. Look for dolphins, fish and clam, beachcomb along the shores, anchor along a sandbar, swim. Keep in mind that the sounds are not very deep, and shallow-draft boats give you the most access to the fun stuff.

Fishing The sounds are easily accessible for fishing. Plentiful boat ramps are available for those who have their own boats, and there are also many fishing boats available for charter, from one-on-one guides to head boats. Without a boat, you can fish in the sound from a dock or bridge or from the shoreline, or you can wade into water.

Hunting All of the local sounds are popular hunting grounds for ducks, geese and swans. Hunting seasons are in the fall and winter. Most hunter use duck blinds, wooden structures set up in the sounds and covered with foliage during the season. Local guides are available.

Clamming/Shrimping/Crabbing Armed with clam rakes and a bucket, you can wade along sandbars and mudflats and scrape through the sandy bottom to find clams to take home and cook. You can catch your own crabs from docks and bridges with a string, bait and a net. Supplies and tips are available at local tackle shops. If you want to try your hand at shrimping, charters are available.

Paddling Kayaking, canoeing and standup paddleboarding are very popular in the sounds. These vessels give you access to shorelines, islands and marshy canals that powerboats can’t get to and are the best ways to view wildlife and birds. Tours and rentals are readily available. 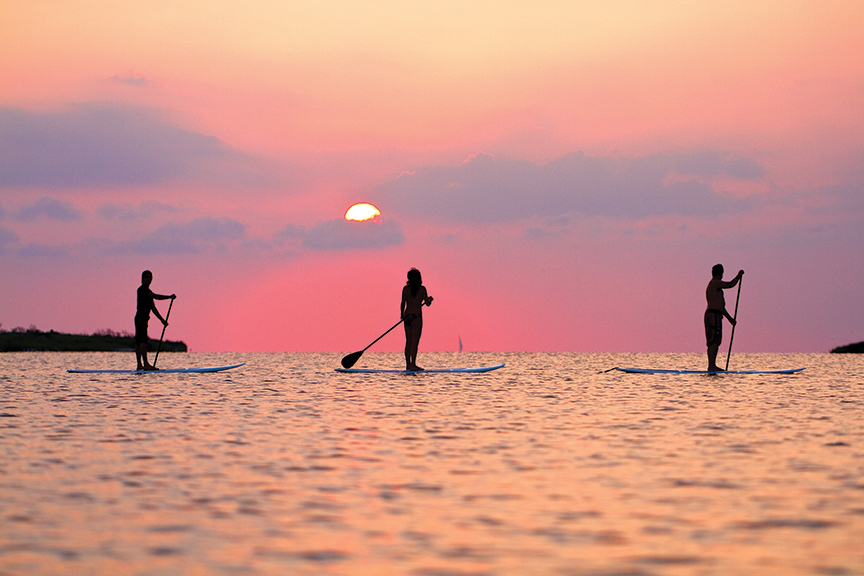 Watersports The warm and shallow waters of the sound, with less wave action and currents, are much more accessible to watersports like paddling, kiteboarding, windsurfing, waterskiing/wakeboarding, Jet Skiing and parasailing. Outfitters for these sports are found in abundance on the soundside in Duck, Nags Head, Manteo and on Hatteras and Ocracoke islands. One of the favorite spots on the Outer Banks for kiteboarding and windsurfing is a soundside access called the Haulover, south of Avon.

Swimming The calm, shallow sound waters are also a big draw for families with young children. Swimming and playing is easier here without the big crashing ocean waves, and the water is usually warmer. Sound beach accesses are available, but there are not nearly as many as beach accesses.

Skirt the Edges You can explore the sound from its edges as well. Enjoy a soundside hike in Nags Head Woods, Kitty Hawk Woods and Jockey’s Ridge, or find an access and observe the places where the water meets the land. 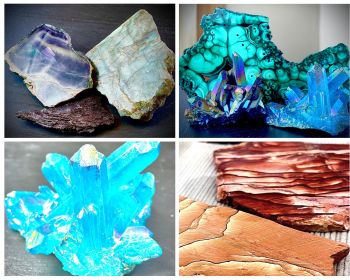