Through the Eye of a Pirate

When the sun comes up on the docks in Manteo, the watermen are already well at work. Some are readying their fishing rods and tackle or checking the sails for a day at sea, while others are swabbing the deck of their pirate ship in preparation for lots of little pirates to board. Ask one of the crew members at Pirate Adventures – a wildly popular kid activity on the Manteo waterfront -- what they are doing, and he or she may say it’s a summer job, but avast! That twinkle in one unpatched eye tells another story. These are some genuine, pirate-talking, high-seas-conquering scallywags.

Each day before the little mates arrive, the pirate staff is getting the Sea Gypsy ready to set sail. Clad in ripped jeans and skull-and-crossbones bandanas, with names like Skipper, No Beard and Bilge, they scrub the ship from top to bottom and raise the flags. These corsairs are ready for anything, running an interactive pirate adventure for children six times a day.

First things first. The brigands must decide who is going to take on which part. Captain Chum – owner Jared Stricklin, that is – always steers the ship, but someone needs to lead the new Sea Gypsy crew while another embodies Pirate Pete, the worst pirate sailing the seven seas. Landlubbers, beware! This will be a pirate’s battle.

After setting up the Sea Gypsy and Pirate Pete’s Salty Dog, which is physically rowed out into the sound in true buccaneer fashion (Pirate Pete will be ferried out later via kayak) the crew meets the tiny swashbucklers. Little boys and girls are attired in striped vests, eye patches and scarves and taught the latest pirate jargon for their day at sea.  “Aye aye!” means “yes,” “Arg!” is “no,” and “Ahoy! implies a friendly greeting. Of course, the lingo may change based on who is running the trip. Today’s fearless leader, Wave, adds in a few extras as she “tattoos” pirate faces and arms. A beard here, a scar there, maybe even some mermaid scales or a Transformer face, and these kids are officially pirates! 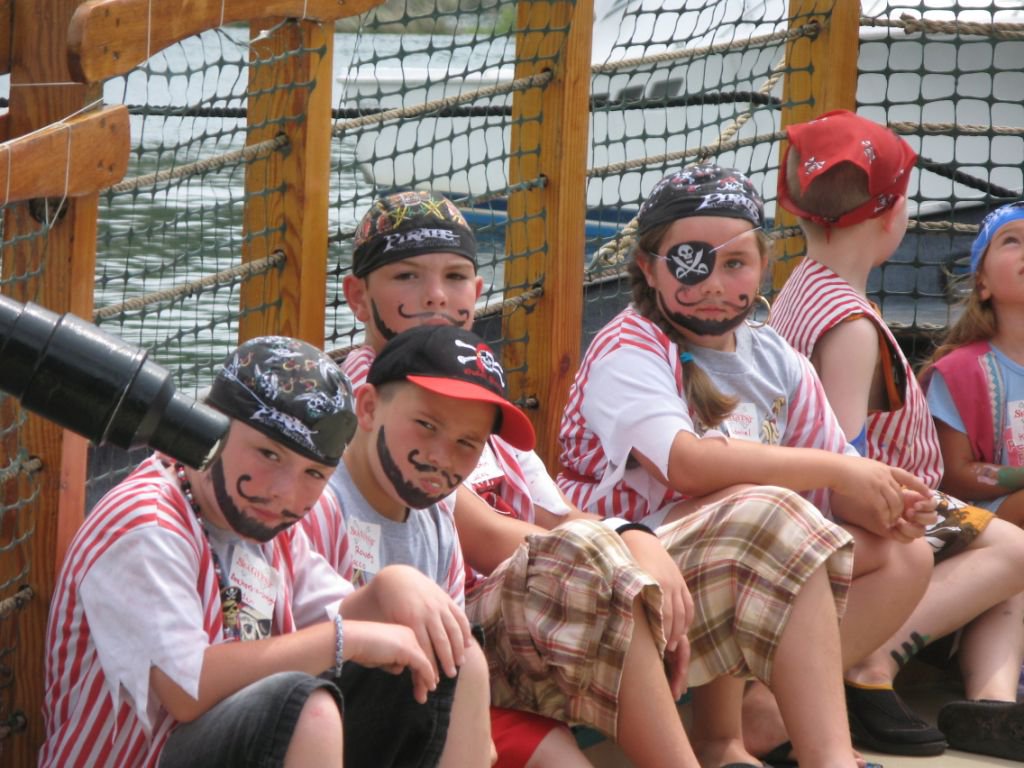 With new names that even Blackbeard would be proud of, the children follow Wave to the ship, sneaking across the docks to avoid attracting the attention of enemy pirates. The Sea Gypsy is a beauty with a mast to hold her sail, all the right rope ladders and rigging and colorful, geometric designs on the sides of Captain Chum’s cabin.

Parents can be seated in a shaded area on board while the Sea Gypsy sets sail into the Roanoke Sound and Wave instructs the kids on a pirate’s life. On the interactive trip, the little pirates learn that there is treasure to be had if only they can reach it before Pirate Pete does. A message in a bottle, spotted in the sea by Wave, and a bona fide treasure map set them on course. Best to avoid Hammerhead Bay and Skull Lagoon, captain. 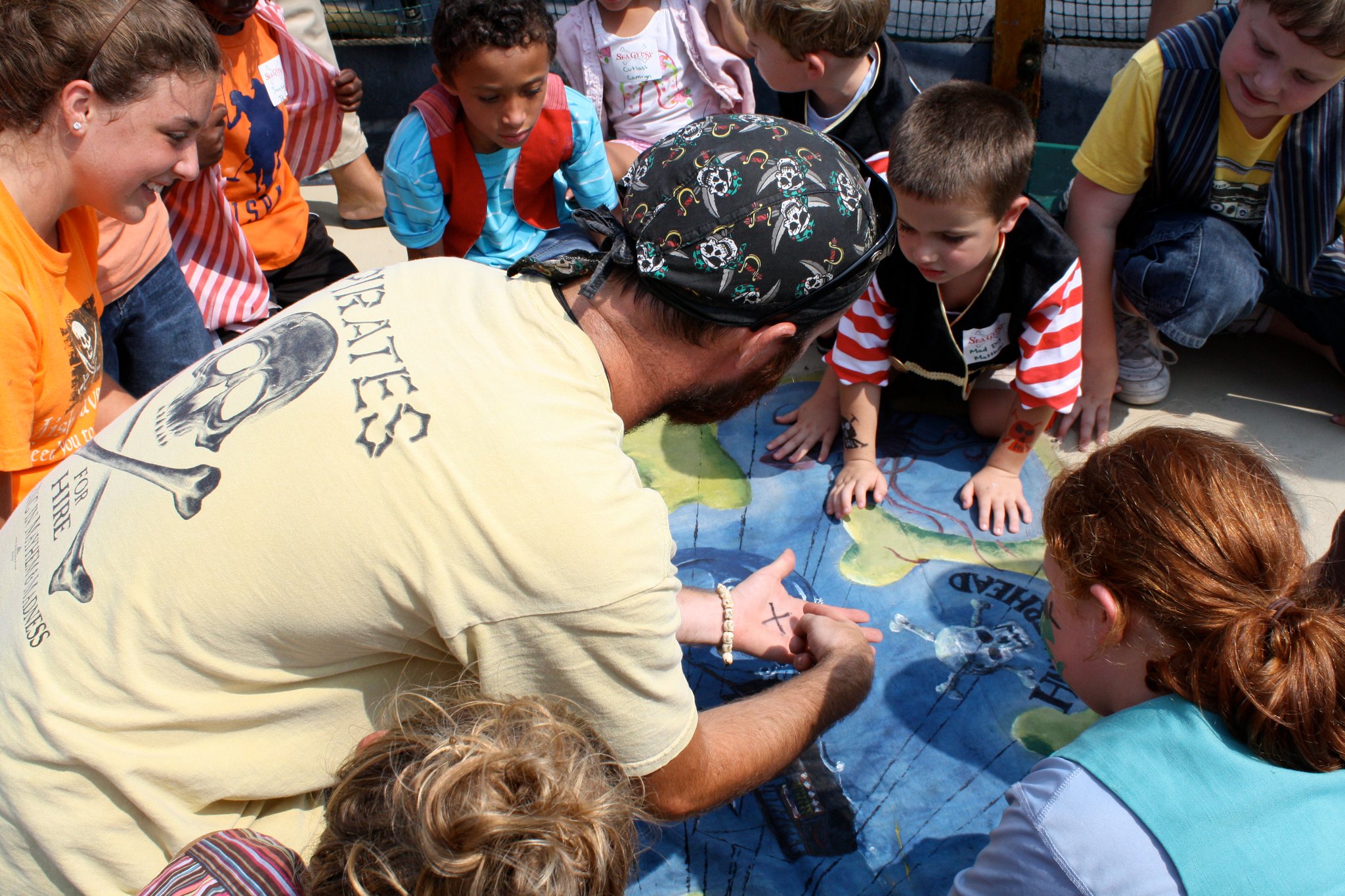 Stricklin says his pirate staff relies largely on the children to further the day’s adventures. It’s not so much acting as it is playing off the kids’ reactions, and the trip is entirely up to the lead pirate’s interpretation. “There’s set things that happen, but there’s no script or anything at all,” he said. “Each trip is individualized. The chain of events is always the same, but the way we get there is different each time.”

After a childhood spent on boats, boards and docks, Stricklin knew he wanted to open a business outdoors for kids. His goal was to have it be as interactive as possible, as he noticed a lack of businesses geared toward children in Manteo. He said, “I grew up on the water, and kind of all my fond memories happened on the water when I was little. I wanted kids to have good memories on the water too.”

The main event of each trip takes place out in the sound after the kids have got their sea legs. Shiver me timbers, it’s Pirate Pete! Wearing tattered garb and sporting long black dreadlocks and a fearsome cutlass, this rapscallion is the scum of the high seas. Luckily, his small yellow dingy doesn’t stand up to the Sea Gypsy.

Pirate Pete hurls humorous insults, while the kids man the water cannons for a face off. Fire in the hole! 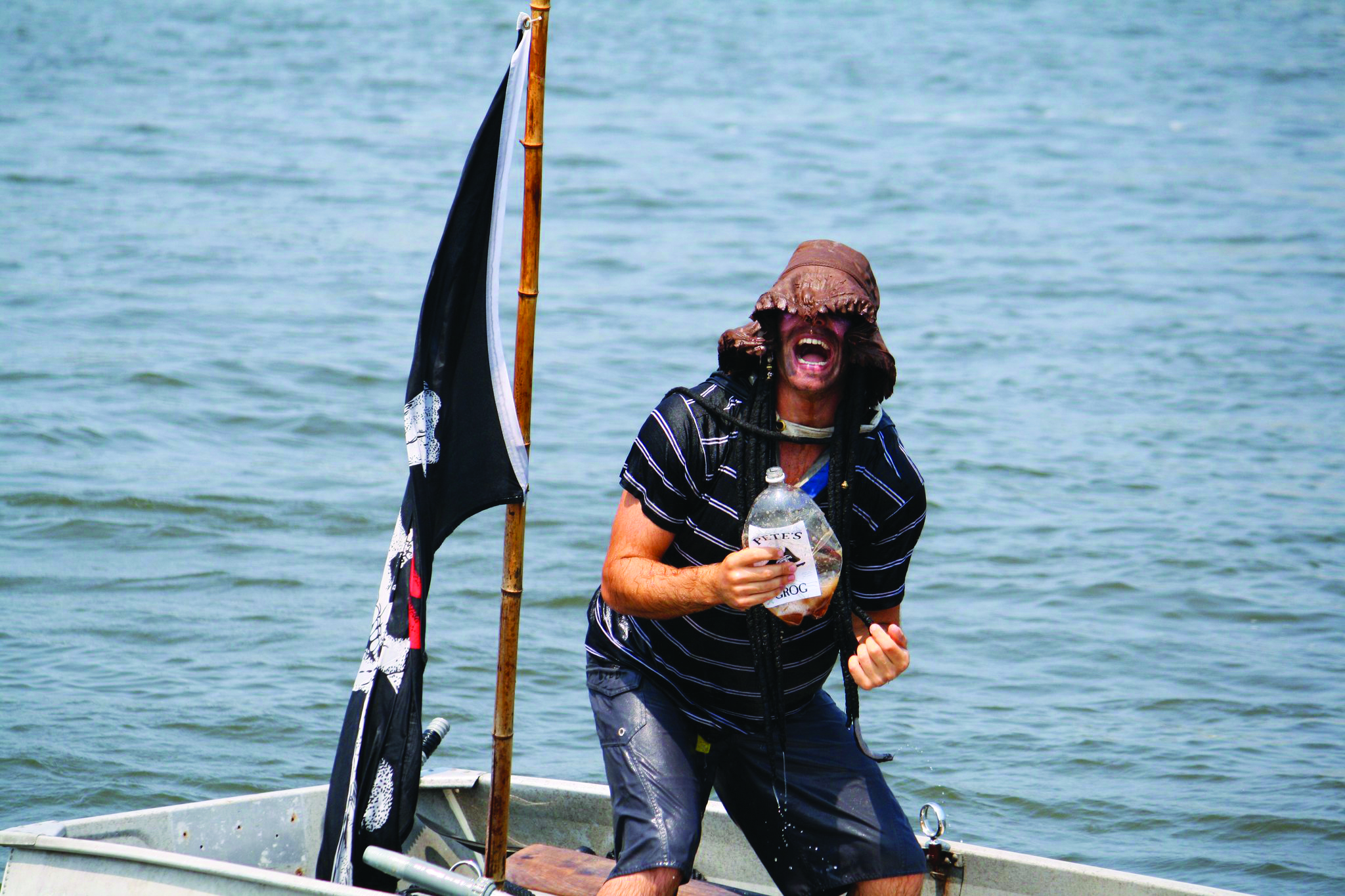 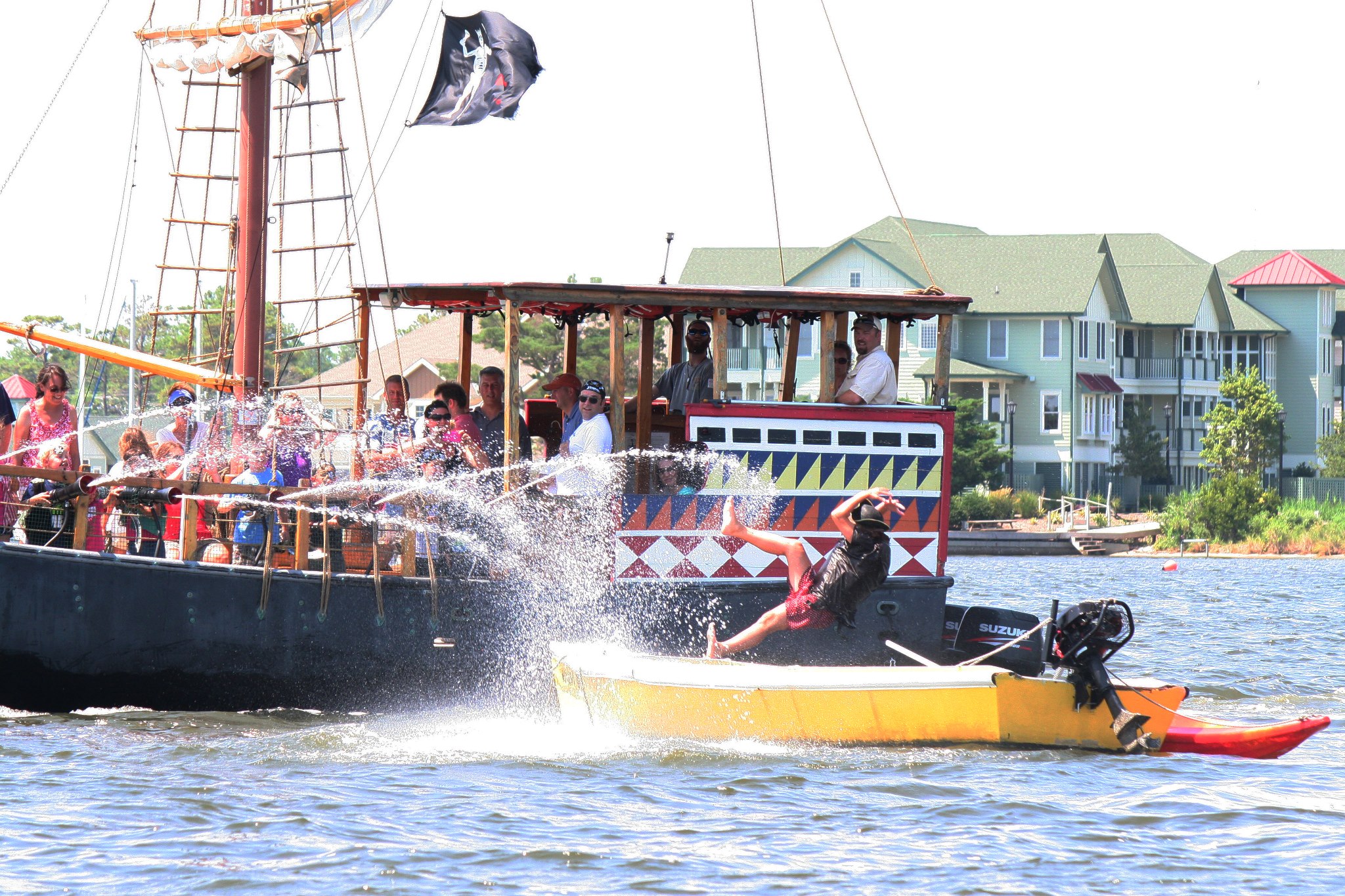 According to Wave, Pirate Pete changes every trip too depending on who is portraying him. Sometimes he likes to play a little more, like the version who tosses pickles at the larger ship or the one who paints himself green (we’re not sure if he is seasick or embodying some sea monster). One thing is certain; when it comes to this pirate, the Sea Gypsy crew gives no quarter.

Treasure chest keys in hand and Pirate Pete in the water, the crew is off to haul their plunder from the depths of the sea. They’ll also catch Pirate Pete’s grog – tastes like soda – and all the kids can get a taste before the ship docks again.

After a long day’s work, the flags are lowered and the Sea Gypsy is tied off. Pirates big and small head home, but that doesn’t mean the fun is over. Some of the littlest pirates have been known to correspond with the Pirate Adventures staff by mail, and the staff loves it. Pirate-speak only, please! Both the kids and employees are known for returning each year, so whether your pirate cohort was Blimey, Scruffy, Savvy or Scar, you’re likely to see them again.

We know the question on everyone’s mind is ... what’s in the treasure chest? Well, you’ll just have to don your pirate garb to find out. 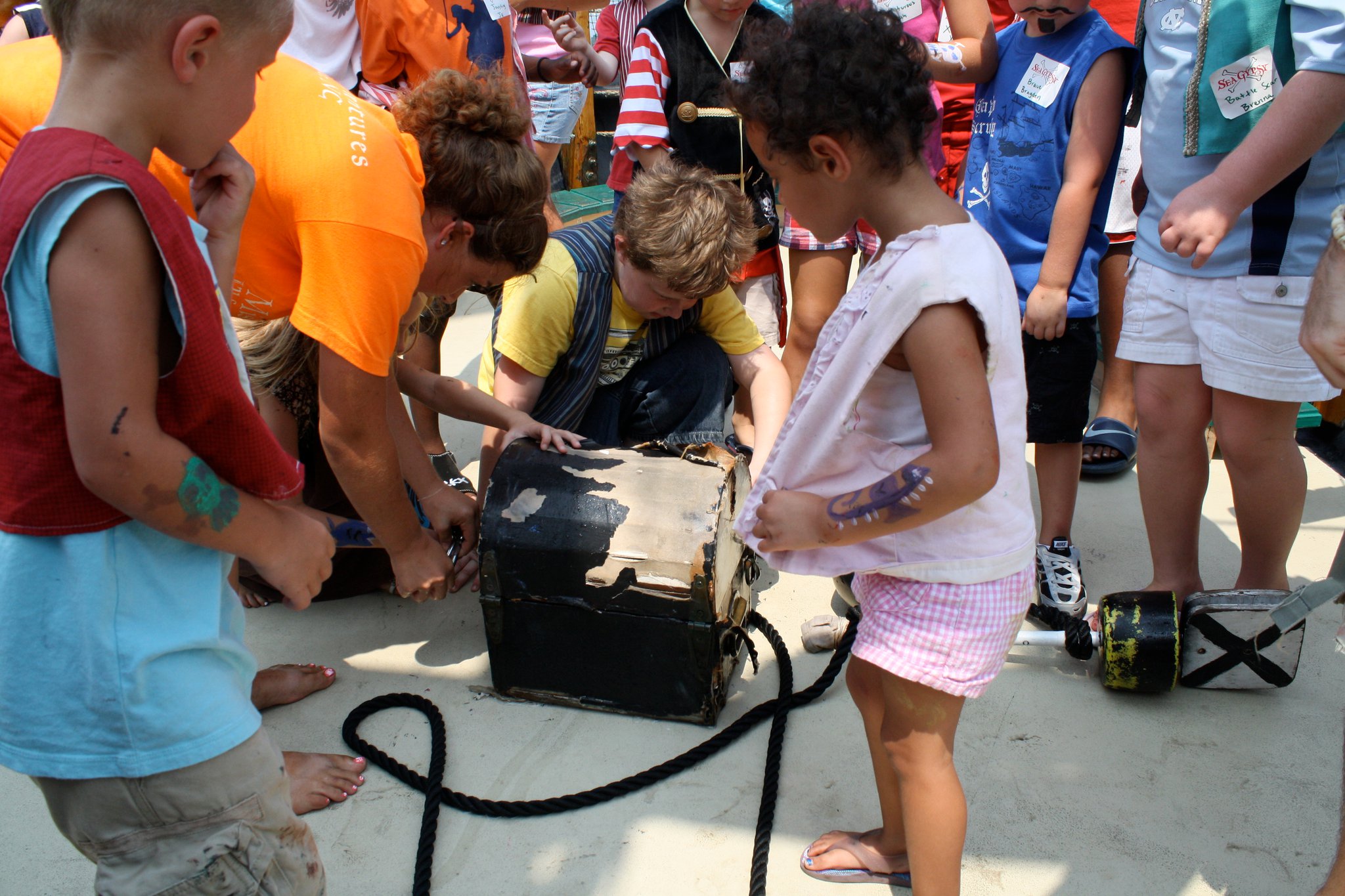 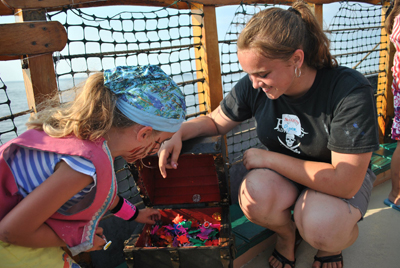