Unbridled Passion for a Rare Herd

The Corolla Wild Horse Fund (CWHF) has some new faces. In June, Linda Adkins came on board as executive director. Last July, Meg Puckett assumed the role of herd manager. The passion both women bring to their work is palpable and inspiring.

Linda grew up working on farms near Philadelphia and brings extensive horse knowledge to the CWHF. She holds a degree in Animal Science with an equine specialization and has worked with horses in diverse settings and roles. She has managed farms, shown horses, retrained racehorses and taught show students. She has even done disaster relief with an animal response team. In addition to her equine experience, she has a background in real estate, property management and land preservation. At the fund, all of her backgrounds have converged and connected.

Meg grew up near Franklin, Virginia, but has considered the Outer Banks home base for 20 years. When she landed the job of Herd Manager, she moved here permanently and plans to be at the fund for the long haul. She brings a humanities background to her work, having studied English as an undergraduate and history as a graduate student. She’s a writer who has been instrumental in building a strong social media presence with a global reach. All of the public outreach draws attention to the crucial work Meg performs with the herd. 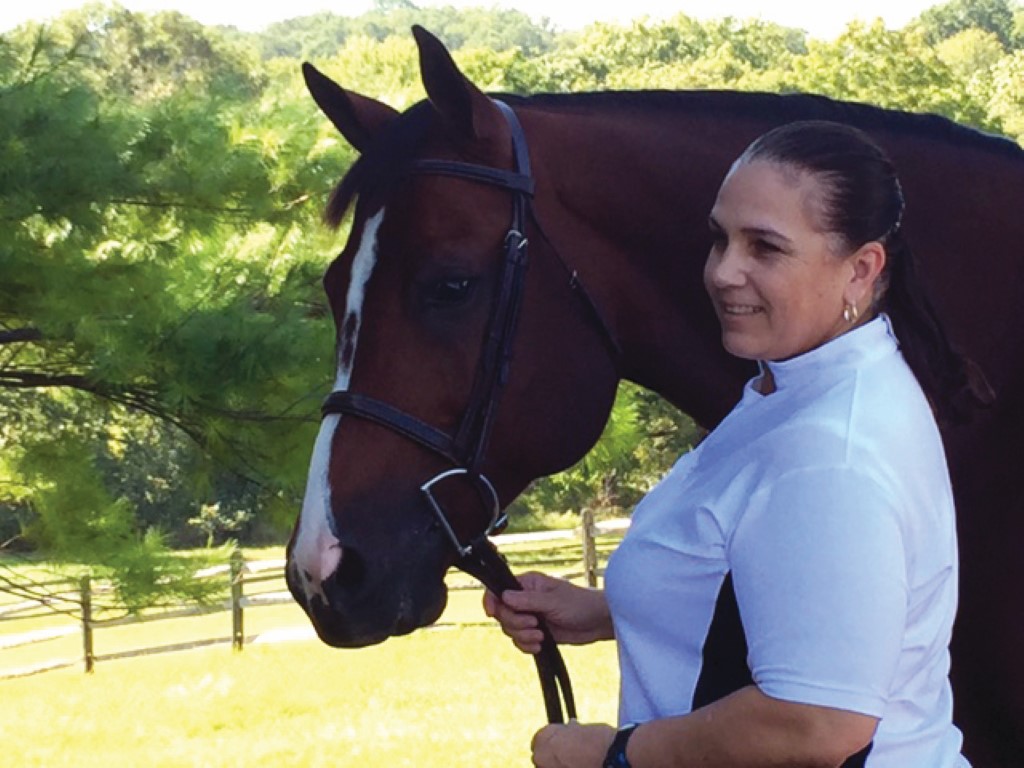 Linda notes that Meg knows all the horses, a feat she finds remarkable, considering the horses all look similar, partly due to their lack of genetic diversity. “These horses were my introduction to horses,” Meg says, so she is invested in their well-being and their survival. Besides, she says, part of learning each horse is simply learning where they like to hang out. Once she learns their patterns, she can home in on their identities and personalities. Meg learns the horses by being with them – she surveys the 11-mile 4X4 area three times a week, responds to calls about injuries or other problems and attends to horses who have to leave the herd and live on the CWHF’s educational farm in Grandy. “Every horse has a different purpose. They’ve adapted to their environment,” she says. These horses graze for 20 hours a day and can cover 10 miles in that 24-hour period.

In addition to caring for the horses, the fund emphasizes education, both formal and informal. On the Trip of a Lifetime, the well-educated guides teach about the horses’ habitat and history. At the museum, visitors can learn even more about the horses, particularly the ways in which they have interacted with people across generations. The CWHF also hosts activities for kids such as Paint a Mustang (a wooden one, of course) and Meet a Mustang, visits by gentled horses that now live on the farm. 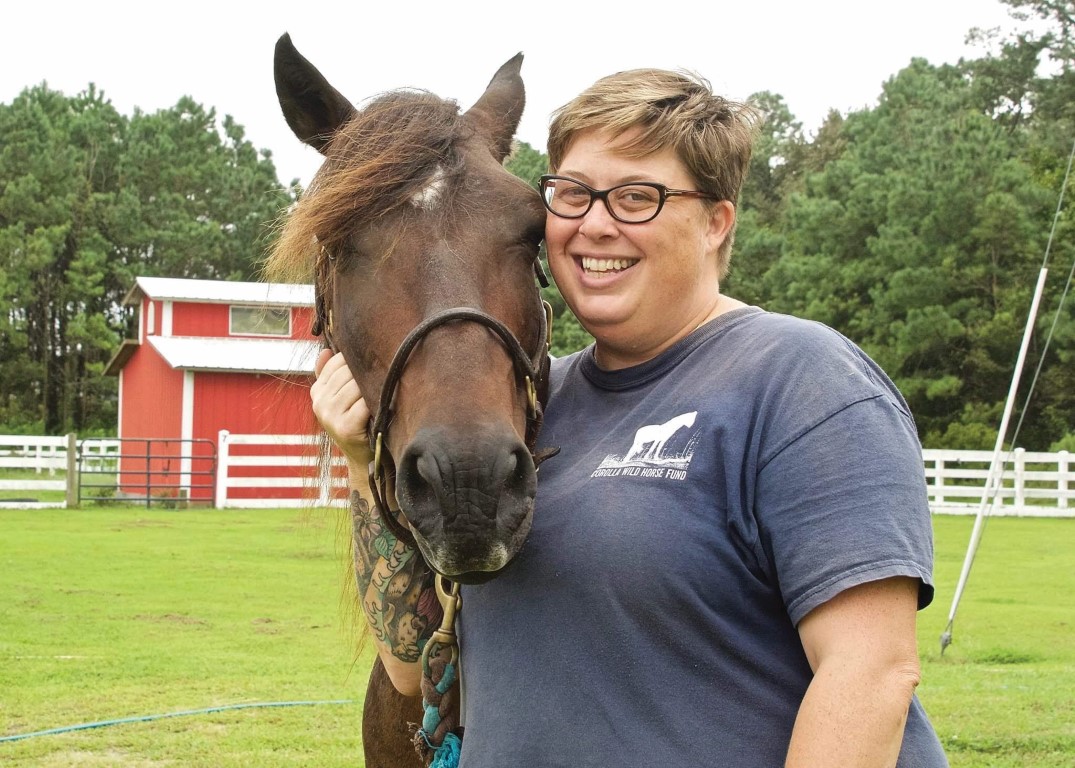 Linda relishes talking about the fund’s mission. The CWHF is the designated nonprofit entity that protects and preserves the horses. When visitors sign up for a Trip of a Lifetime, they become members of the organization, and the trip they take to see the horses is educational, she says. The money the organization brings in goes directly to the horses’ care, covering expenses such as food and veterinary care for horses on the farm and herd management and operational expenses for the horses on the beach. The horses’ habitat is actually the marshland near the beach, but the beach provides relief from bugs in the marshes, and this is why visitors are able to see the horses.

The CWHF has a much broader reach than its membership, however. In the summer Corolla sees 60,000 tourists a week, which means the fund’s job of educating the public is critical. Every employee is an advocate for the horses, and community members also feel protective of them. One of the fund’s main messages is about how to be around the horses. For example, many visitors do not know that they should stay at least 50 feet away from them at all times and that feeding them is illegal. The horses eat a specialized diet of marsh grasses and aren’t accustomed to carrots, apples and other foods that people may be used to giving other horses. A newer threat to the herd is the flying of drones, which has become a popular activity with tourists. Drones are not allowed because the noise disturbs the horses. 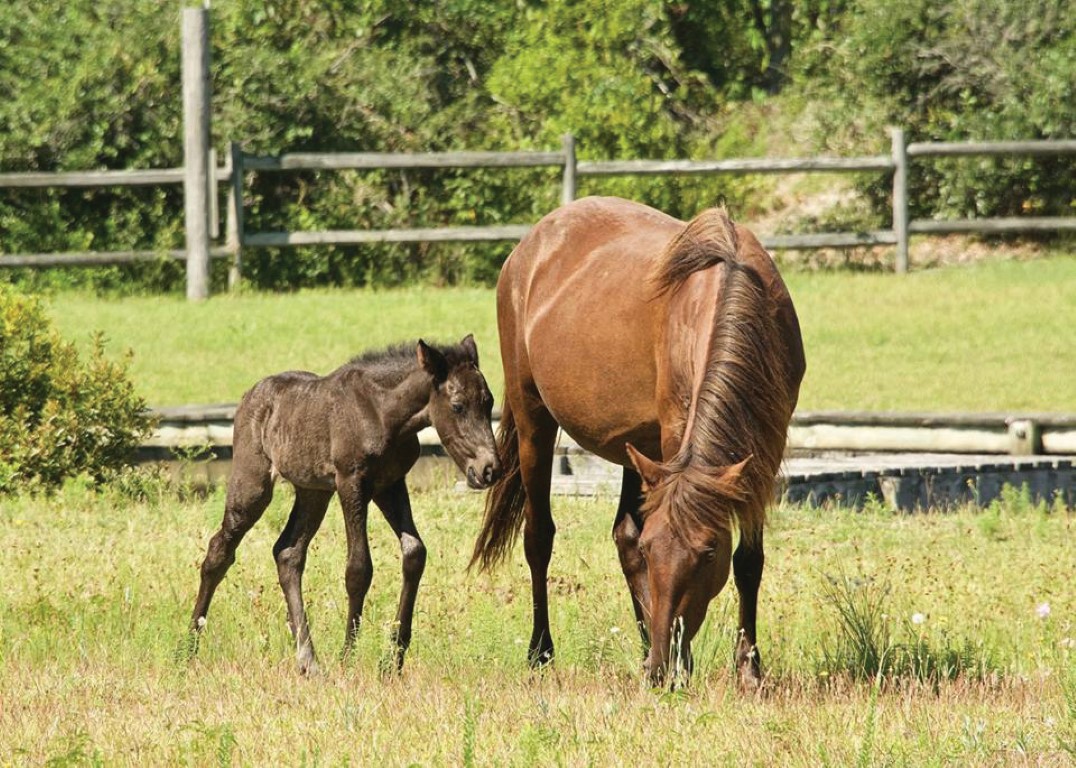 Major storms disturb the horses as well. In early September, Linda and Meg were preparing for Hurricane Irma. “It’s difficult to have a policy for a hurricane when you’re dealing with wild horses,” says Meg. But the CWHF does. To prepare, Meg stocks up on hay and grain, braids ID tags into manes and paints the word Stallion across the side of the herd’s two stallions that now live on the farm. These horses are treated more like domesticated animals. The horses are safest at home, of course, but each major storm raises the question of whether to evacuate them. Although it is possible to evacuate the horses on the farm, the wild horses are on their own and must fend for themselves on the 7,544-acre preserve.

The herd has recently gained a couple of new horses. Whenever a horse is born, the fund holds a naming contest. It’s a way to involve the community and get people invested in the horse’s welfare. Contestants pay a dollar per name entered and pay through PayPal. The most popular names are put in a jar, and the winner is chosen randomly. The female foal born on July 18 was named Eclipse, a fitting and poetic name for the summer of 2017.
In August, the group came upon an unexpected find during one of its herd counts. Linda describes flying above the grazing area by helicopter and noticing a family group: a mom, a dad and a foal the group did not realize had been born. He was lying on the ground and, because he was only a month old, could have been easily missed. 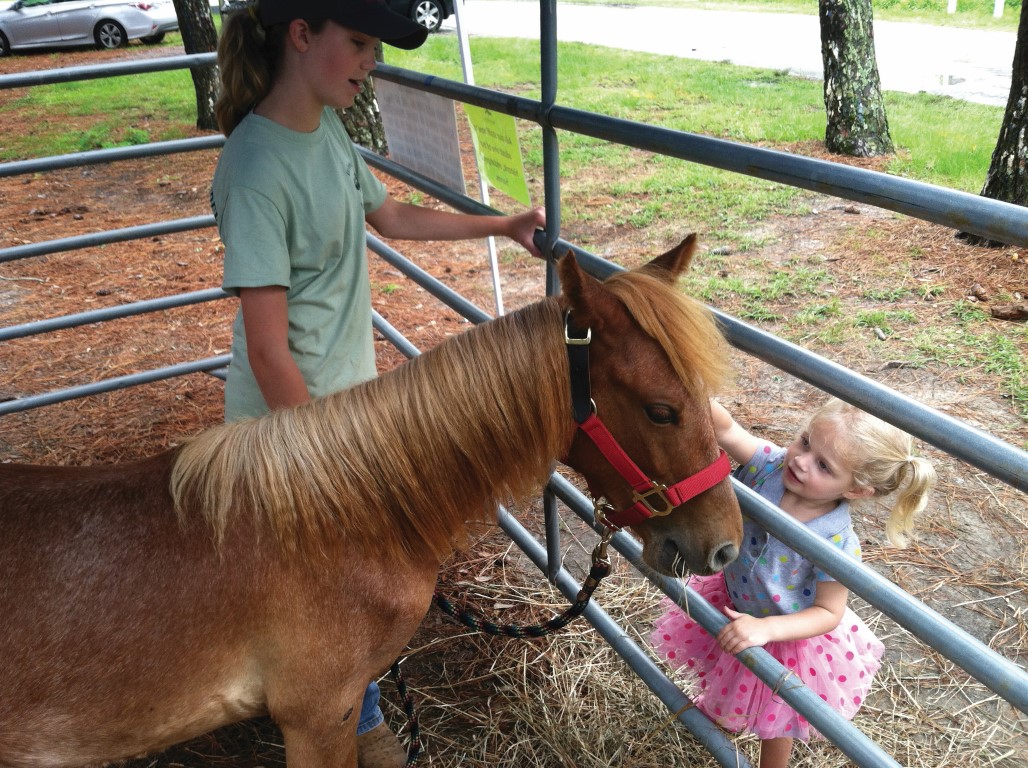 These herd counts, which occur four times a year, are invaluable in helping the fund assess the herd’s size, grazing patterns and overall viability. The counts are part of what Linda describes as a more scientific approach to herd management. Meg agrees and adds that drivers of the Trips of a Lifetime also report their daily observations to add to the scientific canon of data the fund collects. This information is important because the herd is small, around 100 horses, and, if it gets much smaller it will be on the verge of genetic collapse and face extinction. Although the herd has lived on the Outer Banks for nearly five centuries, it has diminished drastically through the years. Amazingly, it was once 5,000 strong. The CWHF is working toward federal legislation that would allow it to breed the Outer Banks herd with the Shackleford Banks herd – the herds are DNA-related and are some of the last known of this breed on Earth – so that the Outer Banks herd can stay genetically viable.

“We’re just a little group trying to do a big thing,” Linda says. “It’s just so astounding, everything that goes on here,” she continues. “The community support is fabulous. These horses are beloved. People feel an ownership of them even though nobody actually owns them.”

Take 10% off the purchase of a T-shirt