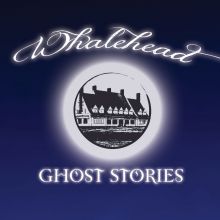 With so many possible activities available during a visit to the Outer Banks, perhaps you think you already know all you need to about Corolla's immense Art Nouveau mansion (now known as Whalehead), its wealthy industrialist builder and owners and its golden years as a sportsman's paradise, hosting privileged hunters and fishermen for extended periods. But have you heard about the ghosts?

Of course, it is widely known that the Outer Banks has had no shortage of colorful history, turmoil and tragedy. The troubled history of the area goes back to early 1700s when pirates and privateers sailed through long gone inlets to take shelter in these shallow waters. Since then, its moniker "Graveyard of the Atlantic" has been well-earned thanks to the prevalence of deadly storms and rough seas that have sent many ships and their crews to the bottom of the sea or crashing to their doom on the shoals and beaches over the course of the past 300 years. Could this be part of the reason the area has a reputation for the supernatural? Perhaps. Reasons aside, a number of ghost stories predate the building of the Whalehead mansion and plenty surround Whalehead itself. Whalehead acknowledges this haunted history with the nighttime Moonlight Legend, Lore and Ghost Tour (see tour details and schedules at the end of the article). 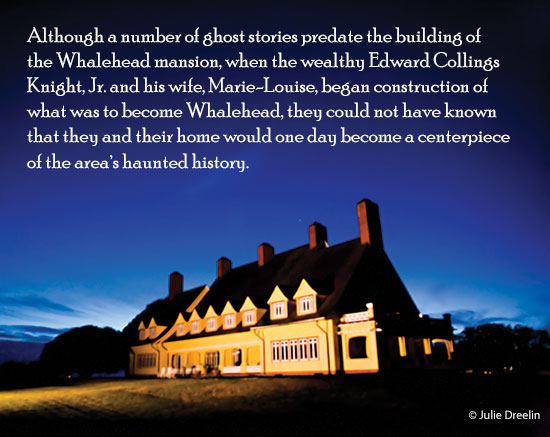 In the last half of the nineteenth century, the United States government built a series of lighthouses along the Outer Banks to aid navigation. The Currituck Lighthouse, finished in 1875 and the last to be built, illuminated the previously dark coastline between Virginia's Cape Henry and the lighthouse at Bodie Island near what is now Oregon Inlet. Around the same time the United States Life-Saving Service established a life-saving station on the beach of what would one day be called Corolla and a small village sprang up to support the station.

Tragedy was not long in arriving. In 1876 the Italian ship Nouvo Ottavia became stranded on a sandbar during rough seas. The new life-saving crew attempted a rescue but were overcome by the surging waves. The entire life-saving crew and all but four of the Nouva Ottavia's crew perished that night, and the bodies washed ashore for days. Maybe you can imagine what spirits might be lingering along the beach, what experiences locals - and even some visitors - have had over the years. Or, maybe you can't. And, tragically, the Nouvo Ottavia would not be the last vessel to meet misfortune along this treacherous stretch of coast. Whalehead's ghost tour guides will thrill you and chill you with other tales of seafaring apparitions that have reportedly haunted the area for generations.

When the wealthy Edward Collings Knight, Jr. and his wife, Marie-Louise, purchased the area they renamed Corolla Island in 1922 and began construction of what was to become Whalehead, they could not have known then that they and their home would one day become part of the area's haunted history. 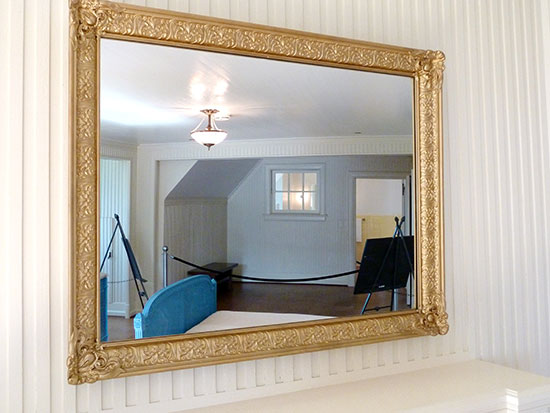 Although paranormal activity has been reported throughout the mansion, Mrs. Knight's bedroom has gained a reputation as a "spectral hotspot."

Over the years have come reports of voices emanating from empty rooms, pots and pans clanging mysteriously in an empty kitchen, doors banging shut and other unexplained phenomena. Join one of Whalehead's ghost tours and learn what a team of paranormal investigators discovered during their examination of the property and its legends.

In the 1960s, after the mansion's time as a private residence had come to an end, the Atlantic Research Corporation decided to take advantage of the area's remoteness to conduct classified rocket fuel tests. The company allowed employees' families to stay in the home on weekends.

One night, a company employee and his wife were sleeping in what was once Mrs. Knight's bedroom. Awakened by a door creaking and bumping in the nighttime breeze, the husband headed to the bathroom, planning to somehow brace the door on his way back to bed. Returning from the bathroom the man stepped around a woman who he assumed, in the inky darkness, was his wife kneeling by the door in an effort to secure it. But, climbing back into bed the man was shocked to find his wife already there...and sound asleep! Who had he passed by the door? 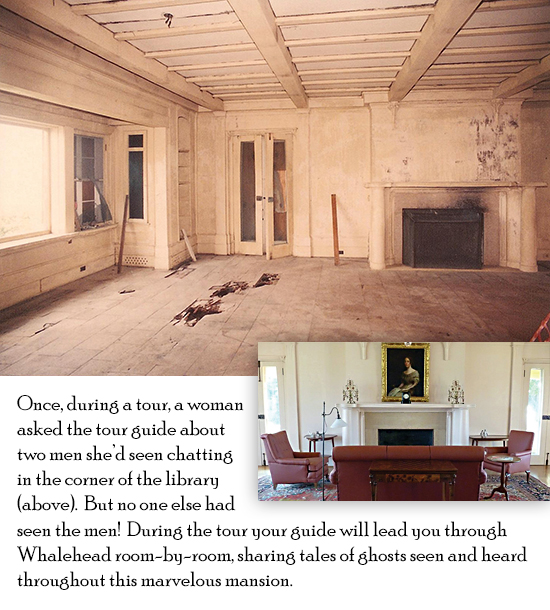 One of Corolla's oldest residents, who now volunteers at Whalehead, was once a security guard at the house. When a hurricane approached the area the man was permitted to take shelter within the mansion, taking advantage of its massive, and presumably safe, structure. Accompanied by his dog, the man selected a spot safely away from any windows just outside Mrs. Knight's bedroom and made preparations to spend the night. Suddenly, the dog erupted in a growling, barking frenzy directed at a corner of the room! What panicked the man's loyal and normally calm dog? You'll find out on the tour.

These accounts are just a few of the many you'll hear on Whalehead's ghost tours. Now, we all know these stories are nothing more than delusions flowing from the fevered imaginations of the easily influenced and superstitious, right? A bunch of tall tales won't deter you from visiting this impressive estate and appreciating its restoration of the Roaring 20s rich and famous lifestyle, will they? Of course not. But, before you go, let me offer this small bit of advice. If you are the last person in the tour and you hear footsteps behind you, don't look back, just...keep...walking. Um, maybe a little faster.

The Moonlight Legend, Lore and Ghost Tour
This tour is held on Wednesday evenings at 7:30 p.m until September 8.
The tour price is $25/person and is appropriate for ages 9 and older (although the tour is not recommended for children who are afraid of the dark or who are disturbed by ghost stories).

Heritage Day
Sunday, October 6 | 12 p.m. to 4 p.m.
Bring the family to this huge lawn party on the grounds of Whalehead and experience the best of Currituck County's cultural heritage with food and fun for all! Enjoy the award-winning Currituck County High School Marching Knights and Currituck County Chorus, admire antique cars, watch kite flying demonstrations, participate in children's activities and view the works of local artists and craftsmen. Dogs on leashes are welcome to this family-friendly event. Admission is free for Currituck residents and homeowners; admission is $10/non-residents (includes lunch and tour). Parking is free.

Corolla Car Show
Sunday, October 20 | 10 a.m. to 3 p.m.
Join in for a day of fabulous cars and fun! Cars of all models, ages and sizes will be displayed throughout Currituck Heritage Park.

Christmas in Corolla
November 22-24 & November 29-December 1
Here's a wonderful way to enjoy the holiday with family and friends! Come see what Santa brought to Whalehead and share Christmastime with the Knights. The house will be festive and elegantly decorated, and hosts will set the scenes that bring the Knight's Christmas story to life. Share in the traditions of the staff from their home countries of Portugal, England and Germany. Visit the basement and delight in viewing a model train that depicts the Knight's journey from Philadelphia to Corolla and view Christmas trees decorated by Currituck students illustrating popular literature from the time period.