A World Away on Pamlico Sound 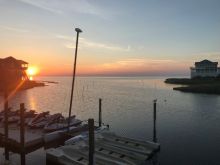 From the bustle of boats at work on the water to the tranquility of sunset hour, the views at Open Water Grill are distinctly Hatteras Island. But amid an abundance of fresh, local seafood, the innovative concepts at play in the kitchen can be traced back to destinations all over the world.

Defined by bold, international flavors and a serious passion for quality ingredients, the two restaurants by Martin Schaffer are the kind that bring you back again and again – whether it’s to grab your always-favorite fish tacos topped with creamy chimichurri sauce or to join the team on their culinary journey with new, globally inspired offerings each year.

Prosciutto-wrapped scallops, Thai chili chicken stir-fry and a signature flatbread pizza are just a few of the incredible menu items you might find at the original Avon outpost (now in its seventh season) and the new Hatteras Landing location. But the cuisine and the experience are actually a little different depending on where you go.

From the soundfront deck with near 360-degree views of the water to the expansive menu, everything about the new restaurant is bigger. Wall-to-wall windows overlook the marina – teeming with charter fishermen, ferrymen and Coast Guard members at work – and the incredible natural splendor of Austin Creek Marsh. 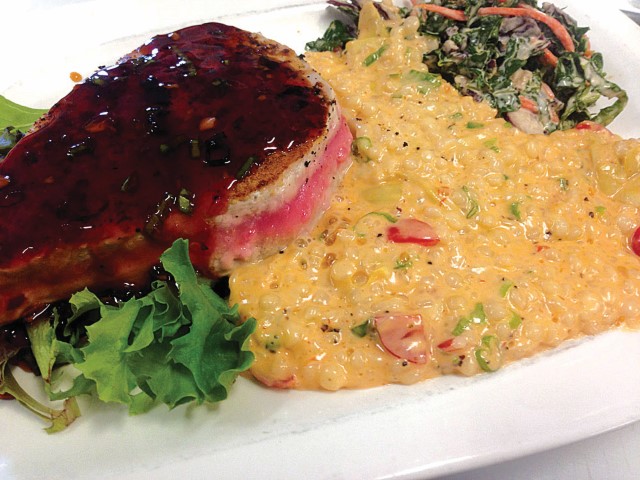 “When you pan your head around,” says Martin, “you are captured by the beauty of everything that has to do with life on the water. It’s in motion.”

He describes Open Water Grill Hatteras as being two different restaurants depending on the time of day. When it’s light outside, there’s a wealth of activity on Pamlico Sound, but as soon as 5 or 6 p.m. rolls around, that all but ceases as the Coast Guard and charter boats come in for the day and the ferries become less frequent. As he would put it, the boats “go to sleep.”

“You can feel the water from the sound clapping up against the bottom of the building,” he says. “You can see the boats quietly move back and forth as the water comes in and out. You see them moving in slow motion, and you realize that they are almost living things.”

Having chased sunsets in Hawaii, California and even the Grand Canyon, Martin thought nothing would ever compete with the beauty of an Avon sunset . . . that is, until he saw the sunset in Hatteras. The contrast between the busy day and the tranquil start of evening makes the color-drenched sky reflecting on the sound all the more beautiful – making either restaurant an ideal choice for dinner. (He recommends arriving 30 to 40 minutes before sunset.)
But, of course, the main draw at both locations is the food.

Encouraged to explore great foodie destinations across the globe, the Open Water Grill team spends all winter refining the menu to keep what they do best and add fresh inspiration from their off-season travels. And some of their best ideas for this season were actually conceived right here in the United States. 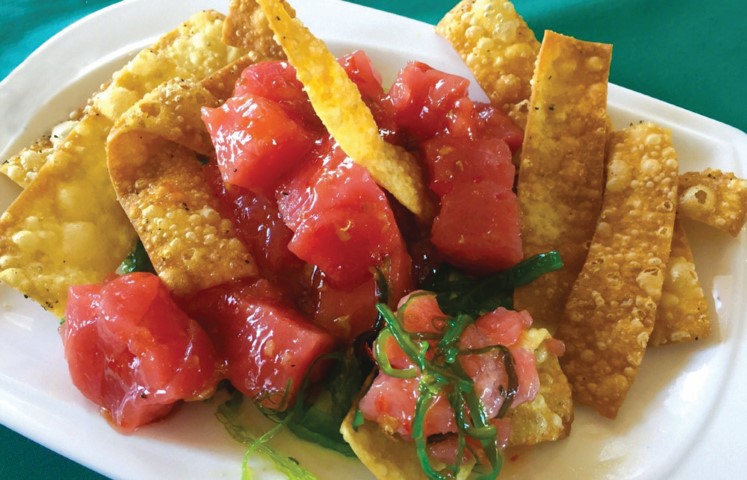 In Tennessee, the team dined on prosciutto-
wrapped asparagus, sparking the realization that traditionally bacon-wrapped scallops instead should be covered in prosciutto, which melts into the scallop. While in Colorado, a shepherd’s pie at an Irish pub unexpectedly inspired Martin to make his own version with fresh fish and shrimp – today a favorite – and in Oregon, adventures in food truck fare reminded the team that just a few ingredients can go a long way.

Martin’s hometown of Washington, D.C., provided perhaps the greatest inspiration. In an expansive culinary scene that represents most of the world, he was reminded that Open Water Grill should combine the best of international cuisine with who they are as a restaurant. (Washington, D.C., is his favorite destination for global cuisine, followed closely by Naples, Italy, where the time-honored cooking styles don’t require you to reinvent the wheel.)

While Open Water Grill’s menu has evolved from the burgers and Reubens it opened with seven seasons ago, the chefs have definitely kept in touch with the restaurant’s roots. A perfect example? You can still find the traditional fish fry on the menu, but what you’re getting today is an elevated version of the classic. (And every once in a while, you can find the spicy chicken cordon bleu topped with pineapple as a special. It’s still the number one requested item for private parties and weddings despite not being on the menu since 2014.)

“We’re not making a total transition every year,” says Martin. “We’re trying to keep those items that we know in our hearts we do very, very good work with.”

At the end of the day, the Open Water Grill team is proud to be part of the Outer Banks restaurant scene, particularly on Hatteras Island where the number of people who make trips down from the northern beaches for lunch or dinner has quadrupled over the course of seven seasons. 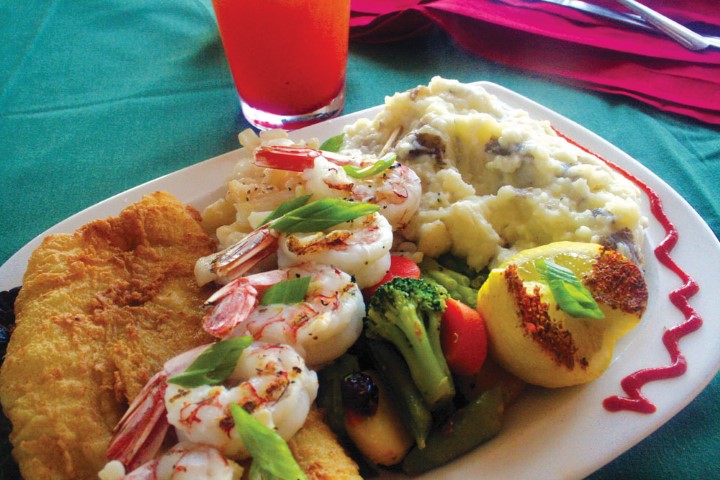 “That says a lot about the culinary scene on the island and where it’s gotten to from where it started,” says Martin. “I am so proud of the men and women in the food scene down here, pouring their heart and soul into their places. They, along with Open Water Grill, make Hatteras a foodie mecca.”

Having worked in the restaurant industry for more than 20 years – in eateries from Virginia Beach to Hawaii – Martin says, “I would never move. When I tell people a list of reasons to come down here, as shocking as it is, the beach is number two.”