Bite Me Sportfishing ChartersGreat day back in Hatteras

Great Day Back in Hatteras 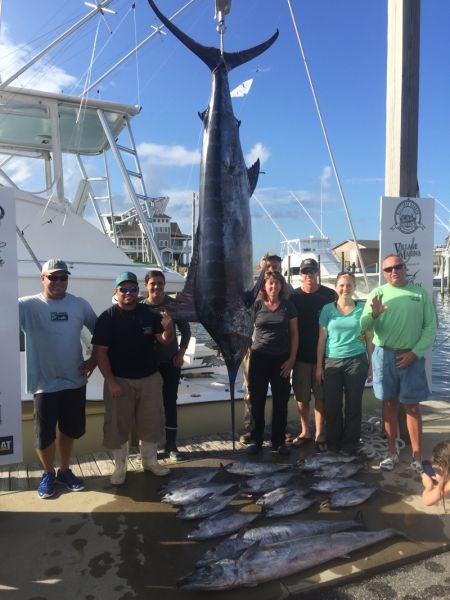 Back at it in Hatteras.

The Crew from Baccus Seafood in Hertford, NC on board today.

These guys and gals spend a lot of time on the water but have never been in the ocean.

We went out targeting tuna and found them a nice catch of black fins and a couple of wahoos including a 41 pound citation for Chase!

Greg had our catch of the day though a 338.5 pound blue marlin that we brought back to the dock.

I want to add that I have been doing this nearly 20 years, and have never taken a blue marlin.  We are actually allowed to take one 99" or bigger (lower Jaw Fork Length) per day.

We have released a few hundred billfish on the various Bite Me's over the years and have never put one in the boat.

The party was into it, lets just say, it was time.

a lot of the blue marlin meat will be headed back to Hertford for smoking, and a lot of it was handed around the village for smoking.

It is quite a delicacy, and something we don't get all the time, I am looking forward to it.

When, Cat called his mom to tell him about the day all she said was "bring me a piece of Blue Marlin!"

Great day with a great crew.