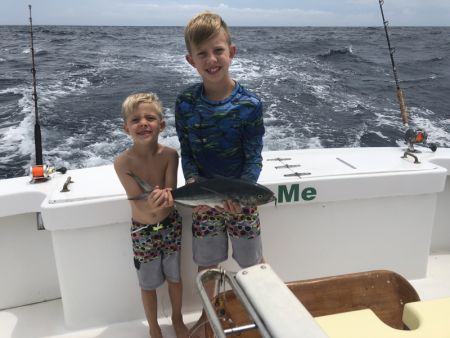 We've had several days off thanks to an unnamed tropical system that has given is rain and wind for the last several days.

Now that Monsoon Season is over, hopefully, we got back at it today with the Carrol Family on board.

It was a bit choppy but they hung in there.

It was very scrappy fishing, we had a mystery bite, then had a nice gaffer dolphin on, but he came off.

Brody managed to catch a Blue Runner trying to locate some dolphin around a large patch of grass.

Despite the slow fishing, we had a good time, and I had company on the bridge for most of the day:  Brody 10, Teagan 9 and Jagger 5.

Had a blast with them on the bridge!

Sometimes, you just don't get them.

I post an honest fishing report of every day we fish, regardless of what we catch.