Bite Me Sportfishing ChartersThere He Is ! 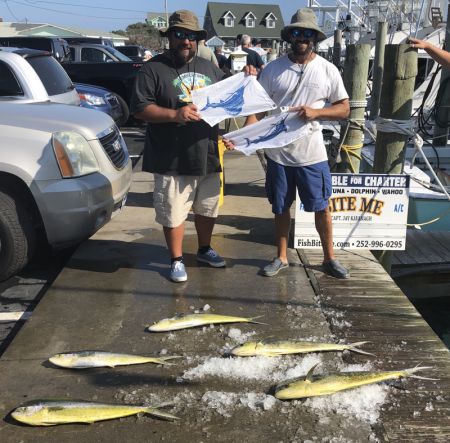 Our long time friend Steve and his bud Keiffer on board today.

Steve always wants to target billfish, and he is lucky!

Today was no exception.

we missed a single Sailfish, then a little while later, the attack squadron of the damn little black ninjas hit us, we hooked two and a couple more followed the teasers in but would not bite.  one came off, but we caught the other Sailfish.

set back out and bam, LaBron popped out and a Blue Marlin of about 250 pounds follows it right up between the flat lines!  put her in a circle and he ate a long rigger.

250 pounder on a dink pole for Keifer!

Put on quite a show!

Bout Jumped in the boat once!

could not get entirely away from the dolphins, catching enough for dinner!

Thanks Steve and Keifer!  Hope to see you up in Pirate's Cove!