In the Beginning There Was The Weeping Radish 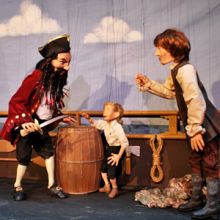 While the genesis of the domestic craft beer brewing industry might be lost to the mists of time and to competing claims from all corners of the nation, it is well-documented that here in North Carolina it all began with The Weeping Radish. Prior to 1985 it was illegal for breweries to sell their beer directly to consumers. The necessity of marketing through distributors with their emphasis on quantity made it impossible for microbreweries and small brewpubs to exist. But in 1985 German-born Uli Bennewitz, living and working in North Carolina, teamed with his local senator to write and pass a bill allowing microbreweries to sell their own beer onsite, making possible a whole new North Carolina industry. On July 4, 1986, Uli opened The Weeping Radish, North Carolina's first microbrewery, in Manteo on Roanoke Island.

From the first batch of beer brewed at The Weeping Radish to the latest draft pulled today, every Weeping Radish beer has been brewed in strict accordance with the Reinheitsgebot Purity Law of 1516, meaning Radish beers are brewed using only hops, malt, yeast and water. No additives, chemicals or preservatives are allowed in the brewing process. It was a recipe for success and Weeping Radish brews won many awards over the years.

Eventually, Uli's vision outgrew The Weeping Radish restaurant and brewery operation in Manteo. He had come to see the need to integrate brewing, sustainable agriculture, traditional crafts and food service into one comprehensive operation, a concept known as Farmer to Fork, and he closed the Manteo operation to focus on this new venture.

In 2006 Uli opened The Weeping Radish Farm Brewery in the community of Jarvisburg on Rt. 158 in Currituck County just a short drive across the Wright Memorial Bridge from the Outer Banks. And today you can witness the success of Uli's vision by participating in The Weeping Radish Tour, which provides a comprehensive overview of the impressive brewery-eco farm complex. Uli leads the Wednesday tours himself, humorously describing the struggles of opening the first microbrewery in North Carolina and the parallels with his pioneering steps in the Farmer to Fork movement. Along the way, you'll visit the brewery, butchery and state-of-the-art smokehouse, sample three different Radish beers and learn how locally sourced sustainably grown food, traditional food crafts and artisanal production methods result in superior product quality, reduced environmental impacts and health benefits.

Up in Corolla you'll find that Pine Island Audubon has a variety of intriguing programming scheduled from early mornings until late evenings. Among these is the Twilight Into Night Hike, a walking tour of the after-sunset maritime forest featuring a symphony of frogs and chuck will's widows and the astounding explosion of stars visible in the clear Outer Banks night sky. The Thursday night hike begins promptly at 8:30 p.m. August 21 (and again on August 28) and runs 60-90 minutes, rain or shine. Pre-registration is required. Admission is $10/person with children aged 5 and younger admitted free. Flashlights are provided. Like all the Audubon walking tours, the Twilight Into Night Hike more than 1 mile in length, so comfortable enclosed walking shoes are recommended, as are a hat, water and bug repellant. No strollers or dogs are allowed. Refunds are available only when a program is cancelled. All programs begin at the Pine Island Lodge on Audubon Drive (turn at the Pine Island Racket Club sign near the Hampton Inn).

Jockey's Ridge State Park in Nags Head has a weekly calendar jam-packed with free programming and activities for folks of all ages. Several programs will be presented multiple times during a week, so you'll frequently have more than one opportunity to participate. See the Park's website for the complete listing of all programs and their times, dates and locations. All those interested should meet at the visitor center. Here's a brief sampling of programs taking place over the next week:

From soaring pelicans to regal ospreys to frog-stalking egrets, birds are a prominent part of the Outer Banks ecosystem. Bird lover and anyone else fascinated by our flying, feathered friends will want to join park staff for Birds of Prey, a 30-minute talk on the basic biology of birds of prey held Friday, August 22 at 2 p.m. You'll learn how their unique adaptations help them catch prey and discover how to identify some of the local species.

Vacationers on the Outer Banks, accustomed to relaxing days on the beach and finely appointed accommodations, may not appreciate what a harsh environment the Outer Banks is for the animals that call these barrier islands home. During the 30-minute Dune Critters program held Friday, August 22 at 10 a.m. park staff will explain how the variety of animals found around the park have developed unique adaptations and behaviors to help them survive. Specific topics vary. Dune Critters will be offered again on August 25 and 26 at 2 p.m. each day.

Marionette performances were still a prominent part of the popular culture vernacular when I was a child and performances were a regular part of school assemblies and television programming. Since then marionette performances have become much more rare. But, don't despair. You can still enjoy this special performing art form through the productions of North Carolina Marionette Theatre, which adapts traditional North Carolina folk tales and legends into professional theatrical productions performed using marionettes on Thursdays at Whalehead in Historic Corolla. This year Tom Benn and Blackbeard the Pirate will be performed each Thursday afternoon at 2 p.m. Arrive early noon and enjoy a "meet and greet" session with the puppets. After the show, stay awhile and make your own scarf marionette for a $10 materials fee. 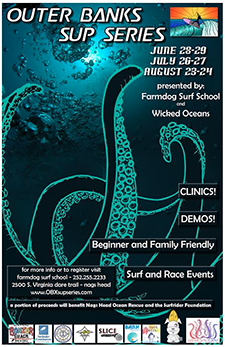 Seldom has a watersport's popularity taken off faster than that of standup paddleboarding (SUP). It was only a few short years ago that I saw my first Outer Banks paddleboarder, and suddenly the activity has mushroomed with clinics, rentals, tours and competitions seemingly anywhere one finds water. The OBX SUP Series, beginning Saturday, August 23 at 8 a.m. and sponsored by Farmdog Surf School, rides this new wave of popularity. Held three times a year, the OBX SUP Series is held in Nags Head and includes contests and clinics for paddleboarders of all experience levels. This weekend's two-day event features an Ocean Surf Day with surf contests and races and a Flat Water Day offering both races and tours. Both days will also feature clinics of interest to novice and intermediate wave riders as well as flat water paddlers while advanced paddlers test themselves against the competition and the Outer Banks' challenging waves. Pre-registration is required. Prices vary depending on level of participation; see the event website for details.

Another wave-centric event this weekend is Surfing for Autism, an autism/Asperger's Syndrome awareness event held at Jennette's Pier in Nags Head each summer on the Outer Banks. As part of this effort to provide autistic children with the opportunity to safely enjoy the experience of surfing, two surfers and a skilled autism therapist are paired with each participating child, and together they introduce the child to paddling, surfing and a new way to have fun in the sun. Surfers will hit the waves from 9 a.m. to 1 p.m.