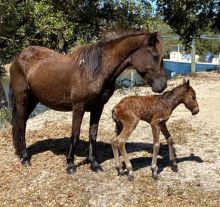 Corolla Wild Horse is sharing the exciting news of a new Colonial Spanish mustang foal that was born on March 29.

The filly was born to mom Imp and father Dean, whose harem also includes another mare named Autumn. Corolla Wild Horse Fund named her Billie and will be using B for all the names of the foals born this year. Another foal was born earlier this year, but its family has been hiding out in the marsh since it was born and it has not yet been seen. According to the fund, little Billie is strong, swam across a canal on her birthday and is running around on her skinny, long legs. You can see a video of her running on the Fund’s Facebook page.

According to Corolla Wild Horse Fund’s Facebook post about Billie, there was a bit of harem drama after her birth: "Autumn decided that Billie was hers and would not let Imp near her. Billie bonded with Autumn and was trying to nurse even though there was no milk.”

CWHF staff observed this problem for a while before it became apparent they would have to intervene to make sure Billie could nurse with her own mother.

“Autumn was becoming increasingly more aggressive towards Imp, and things were escalating quickly,” CWHF wrote on Facebook. “After conferring with our vet, we decided the best plan of action would be to get Imp and Billie separated from Autumn so that the pair had some time to bond with each other. We were going to sedate Autumn via a dart gun but got lucky, and she inadvertently separated herself by going over a fence that Billie couldn't get past. Our herd manager got Billie over to Imp and she immediately began nursing.” 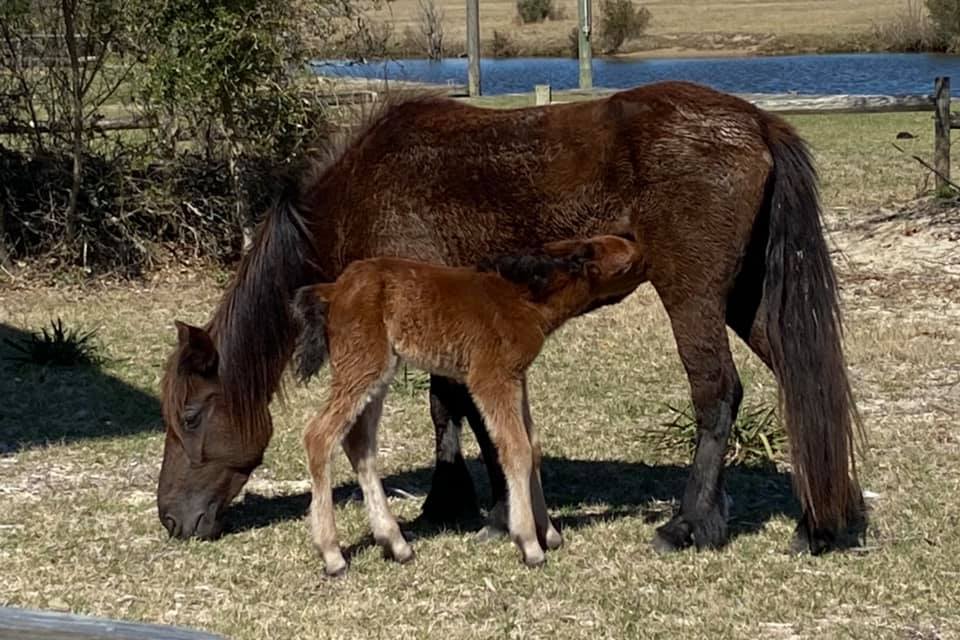 Billie nursing with her mother, Imp.

The CWHF staff kept the mother and baby separated from Autumn for most of the day and allowed Autumn to rejoin them later. “Billie still seems to think that Autumn is her mom, but at least she now knows where the milk comes from. As long as Autumn continues to allow her to nurse off Imp, it should be fine. But it's still a very precarious situation.”

And you thought your job was hard! How’d you like to be diffusing wild horse drama?

CWHF’s job is to protect and manage the herd with as little human intervention as possible, and this is just the type of emergency that the group was created to help with. CWHF says the horses already appear to be working out their issues and don’t seem to need any more human intervention in their dynamic.

The most important thing people can do for this new foal is to stay away from her and her family. CWHF is asking people not to disturb or stress them (or any horse) in any way because it could exacerbate the problems they are already having. Any distraction from humans could interrupt the balance and family dynamics they are trying to establish.

“Billie needs to be able to nurse when she can without disruption. It is literally a life or death situation,” CWHF says.

Currituck County law already states that people must stay at least 50 feet away from the horses at all times and never feed them. If you see anyone harassing or feeding the horses, you should call the Currituck County Sheriff’s Office at (252) 232-2216.

Do Not Feed the Horses!

Many people think that feeding the horses will help them, but it’s actually one of the worst things you can do for them. The horses have a highly specialized diet of wild grasses and native plants, and CWHF does not supplement their feeding in any way. Apples, lettuce, carrots and any other foods can be harmful to the horses or even cause death. One of the horses died from eating a tossed watermelon rind. 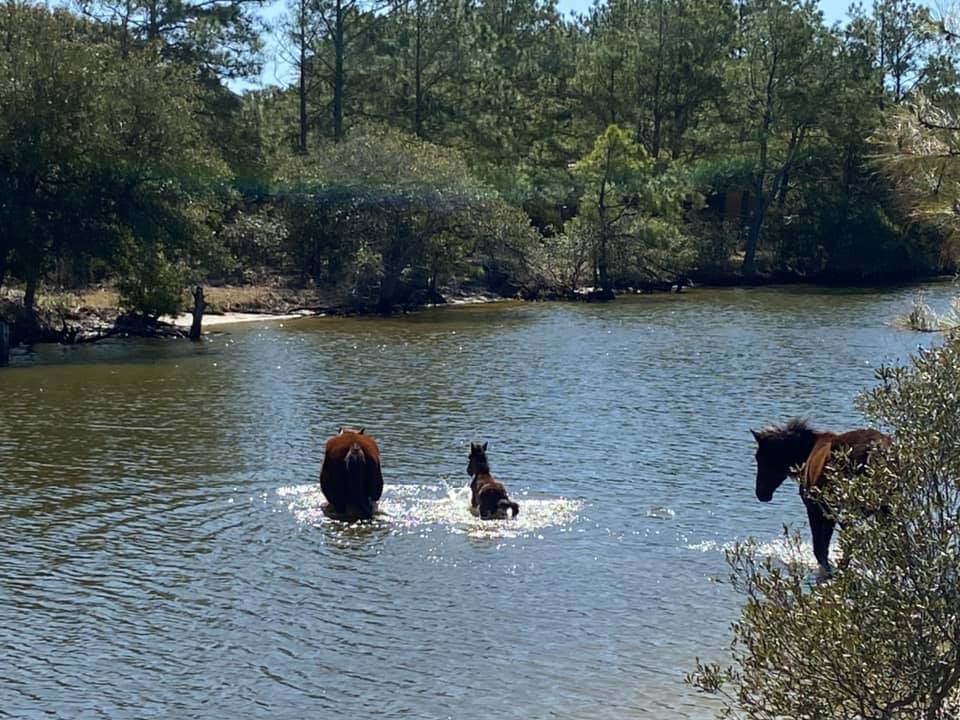 Billie takes her first swim – on the day she was born!

How to Help the Horses

CWHF protects, conserves and responsibly manages the herd of around 100 horses and promotes the continued preservation of the land where they live on the northernmost Outer Banks as a permanent horse sanctuary. They formed as a nonprofit charity in 2001 and support five full-time staff members, including a herd manager who is on call 24 hours a day, 365 days a year. Their primary goals are herd management, sanctuary patrol, rescue and rehabilitation, training, adoption and education. Their headquarters is in Corolla.

“With your help, Billie and all of the rest of the foals born this year and for years to come will not only survive but thrive. We are committed to making that happen and hope that you will join us,” CWHF says.

The safest way to see the horses is on a horse tour, and there are several tour companies on the northern Outer Banks that offer tours that are safe for the horses and the environment. See a list of tour companies here.

Toast the Coast! - Taste of the Beach