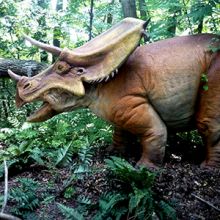 Locals and visitors alike are fortunate that the Outer Banks remains a place where people can co-exist with native wildlife. The list of wildlife one might run into, however - pelicans and sea gulls, hundreds of kinds of fish, crabs, jellyfish, dolphins, deer, fox, turtles, even alligators and bears as you head inland - usually doesn't include triceratops and stegosaurus! But between now and September 1 visitors to the North Carolina Aquarium on Roanoke Island will find that life-sized animatronic dinosaurs, including tyrannosaurus rex, stegosaurus, triceratops, parasaurolophus and others, have joined the collection of Outer Banks fauna as part of the Tyrannosaurus Trek outdoor exhibit. Regular Aquarium admission provides access to the dinosaur exhibit daily from 9 a.m. to 5 p.m. The seven-year-old boy in me says we're going to see the exhibit this weekend. Your inner kid won't want to miss it, either. 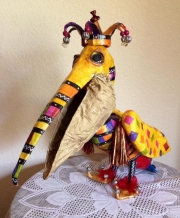 While not officially a kids event or activity, kids will definitely LOVE Carol Willet's solo show at the Dare County Arts Gallery in downtown Manteo. And you grown-up kids, that strange sensation you feel in your face will be the smile slowly spreading from ear to ear as you reconnect with your younger self. Carol's exhibit of fantastical papier-mÃ¢ché sculptured beasties is a dream-worthy collection of dozens of colorful, three-dimensional creatures (many of them freestanding) including fish, manta rays, pelicans, mermaids, dragons and even an impressively large - some might say "giant" - squid. All are exquisitely detailed and elaborately painted in a kaleidoscope of colors. This is a spectacularly different little art exhibit, a definite must-see. The show runs Monday-Saturday through August 30. For more information call (252) 473-5558 or visit the DCAC website.

Looking for something a little different? How about the 11th Annual Roanoke Island American Indian Cultural Festival and Powwow on Saturday, August 9 and Sunday, August 10 at the Westcott Park Complex on Roanoke Island? This celebratory gathering of American Indian tribes from across the nation, all dressed in tribal regalia, includes traditional and contemporary American Indian music, dance, visual arts, storytelling, back wood survival demos, crafts and health screenings. Educational displays will exhibit artifacts used and items traded by the American Indians. American Indian foods as well as other festival foods will be available for purchase. The festival grounds will open to the public at 11 a.m. for presentation of educational displays and the sale of American Indian crafts. Performances and other activities begin at noon each day. Admission is $5/adults (ages 13 and older), $3/children ages 5-12, and free those aged 4 and younger. No pets or alcohol are allowed in the event area. For more information call (757) 477-3589, e-mail {encode="pacoeagle@ncalgonquians.com" title="pacoeagle@ncalgonquians.com"} or visit the event website.

The Pirate's Cove Billfish Tournament is right around the corner, but the 25th Annual Alice Kelly Memorial Ladies Billfish Tournament held Sunday, August 10 from 9 a.m. to 3 p.m. at Pirate's Cove Marina gives the ladies an early chance at reeling in The Big One! The tournament is a fundraiser event for the Outer Banks Cancer Support Group. Registration is scheduled for Saturday, August 9 from 3 to 6:30 p.m., and an entry fee of only $500 per boat makes this tournament a great way to help the community while you enjoy a great day on the water.

Music lovers on Ocracoke, or anyone up for a ferry ride to Ocracoke will want to take in The Ocrafolk Opry Wednesday, August 6 at 8 p.m. Featuring music and stories from talented island performers like Molasses Creek, Philip Howard, Capt. Rob and Sundae Horn, Marcy Brenner, Lou Castro, April Trueblood, Jamie Tunnell and more, The Ocrafolk Opry has something for everyone. Tickets are $15/adults, $7/children 13 or younger and can be purchased at BrownPaperTickets.com. The next performance is scheduled for Wednesday, August 17 at 8 p.m. 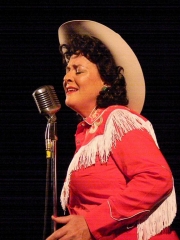 Music fans north of the Hatteras ferry docks may instead want to attend Portrait of Patsy Cline, an original musical play staged at the Hilton Garden Inn in Kitty Hawk and starring the incredibly talented Laura Martier who channels Cline's persona and vocal style to depict benchmarks of Cline's life and career while performing more than 30 of country music legend's songs. The next two performances are scheduled for Wednesday, August 6 and Wednesday, August 13. Seating opens at 7:30 p.m. with the show beginning each night at 8 p.m. The show runs an hour and a half, with a 20-minute intermission. Advance tickets are $25 plus tax and can be purchased at BrownPaperTickets.com. Tickets purchased at the door are $30 plus tax. A dinner and show package is available through the Hilton Garden Terrace Restaurant for $50 plus tax and is served between 5:30 and 7:30 p.m. All dinner/show packages must be pre-paid. For more information call (252) 473-1061.