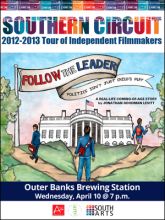 As the old proverb goes, "All's well that ends well." And so it is with South Arts' enlightening Southern Circuit Film Tour, which has graced Outer Banks movie screens over the past several months thanks to the Dare County Arts Council. The last film in the excellent 2012-2013 series promises to uphold the high standard we've come to expect from these independent documentary films. Director/producer Jonathon Goodman Levitt's Follow the Leader will be shown at Outer Banks Brewing Station on Wednesday, April 10 at 7 p.m. Tickets, which can be purchased at the Dare County Arts Council Gallery in Manteo or at the door at the Brewing Station prior to the screening, are $10 for adults, $8 for students and $5 for children 12 and younger. Following the screening of the film, Levitt will engage the audience in a discussion about the film and his work as a filmmaker.

Levitt's film traces the experiences of three conservative 16-year-old boys - Ben, D.J. and Nick - each with presidential ambitions. Born as Ronald Reagan left office and the Berlin Wall fell, Ben, D.J. and Nick came of age in a post-9/11 America saturated with uber-patriotism and a War on Terror mindset.

When the film begins Ben, D.J. and Nick are class presidents attending "Boys State," a week-long leadership retreat that, since 1935, has been a stepping stone for numerous future leaders (from President Bill Clinton to astronaut Neil Armstrong to broadcaster Tom Brokaw). Each boy returns home to his respective small town to find himself beset by typical high school challenges, struggling to overcome the personal attacks of rivals, survive family crises and develop the capacity for independent thought.

By college each of the film's protagonists has begun to reconsider his political beliefs and lofty career ambitions as life lessons and political realities inevitably result in the loss of youthful innocence. Ben, earnest and power hungry, burnishes his Republican credentials by creating negative ads for conservative politician Ken Cuccinelli (now Virginia's Attorney General). Responding to the Iraq War debacle, D.J. has become a Democrat interning for a congressional campaign. And Nick has joined Unity08, an independent third party, although he has "temporarily" adopted the role of journalistic observer instead of actively pursuing what he believes is his ultimate destiny.

The culmination of the film takes place in the waning days of the 2008 national election, the first election in which the boys, now young men, are allowed to vote. For two of the three, personal discoveries have brought great changes in their political views and career plans, showing how political change is ultimately personal, unpredictable and far more complex than most of us realize.

According to director Levitt, Follow the Leader began "as a personal investigation into the politics of today's youth, whose contradictory views confused me while teaching in the U.S. post-9/11. But rather than trying to define millennial opinion generally, my approach was to follow teens who had signed on wholeheartedly to the "War on Terror" as they became adults...Their distinctly different choices on the cusp of adulthood show how kids like them are already redefining what terms such as "liberal" and "conservative" mean as their generation shapes American politics' future."

The Southern Circuit Tour of Independent Filmmakers brings some of best independent filmmakers and their films from around the country and the world to communities all over the South. Over the years, audiences from more than 50 communities have viewed more than 200 films and engaged filmmakers in post-screening discussions. Southern Circuit transforms watching independent films from a typically solitary experience into a communal one.

South Arts, a nonprofit regional arts organization, was founded in 1975 to build on the South's unique heritage and enhance the public value of the arts. South Arts' work responds to the arts environment and cultural trends with a regional perspective. For more information, visit www.southarts.org.

Monday through Thursday take 15% off any drink order of $15 or more!