Music to Our Ears 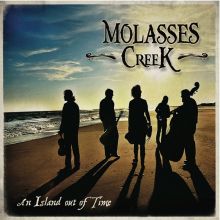 A tourism-based economy gives the Outer Banks an extra shot of culture that you wouldn't expect to find out here in rural North Carolina, especially when it comes to the arts. Artists are drawn to the barrier islands, not only because this is an inspiring place to create, but also because this is a place where artists can make a living.

A lot of talented musicians have chosen to live on the Outer Banks for those same reasons. They find constant inspiration in the laid-back lifestyle and natural beauty - and they get plenty of seasonal work playing the local bars and restaurants and weddings. Of course, like every Outer Banker, most musicians have two or three jobs to help them stay afloat all year long. Musicians work in construction, restaurants, real estate, medicine, banking ... whatever it takes to make a living and do what they love at the same time.

A few musicians have found a way to play their music full time. Molasses Creek from Ocracoke, for sure the Outer Banks' most well-known band, has worked hard for years to rise to the cream of the musical crop, and with their 12th recording, they're succeeding on a national level. The new CD, "An Island Out of Time" reached the #5 position on the national folk charts for March 2012, and the band reached the #9 artist position. Two of their songs, "Mississippi Sawyer" and "Scat Reel Set" are in the Top 20. Remember that's nationally, in the same realm of such artists as the Chieftains, The Steel Wheels, Dave Carter and Tracy Grammer, Carolina Chocolate Drops and more.

A little back story: When Molasses Creek was recording its 12th CD, they decided they wanted to try to break into the national music scene with the help of a Nashville radio promoter on an international radio promotion. The promoter advised the band and helped get the new CD to 540 radio DJs across the U.S., Canada and Europe. With the new rankings, it looks like the promotion paid off.

The members of Molasses Creek are Gary Mitchell, guitar and vocals; Marcy Brenner, mandolin and vocals; David Tweedie, fiddle and vocals; Lou Castro, guitar, dobro, bass and vocals; and Gerald Hampton, bass. The band is going on tour for a while this spring, but you'll be able to catch them on Ocracoke Island at the Ocrafolk Festival during the first week of June and at other times over the summer.

Dare County Arts Council and WVOD 99.1 have been celebrating local musicians for the last seven months with a series of events called Outer Banks Sounds. Once a month for seven months they've featured a few local bands playing in a live music showcase at Kelly's. Next month, they'll issue a CD featuring one song from each of the 20 musicians. The CD will be called Outer Banks Sounds, and it's going to be a great way to give more exposure to numerous talented musicians in a variety of styles. Outer Banks Sounds final showcase performance is Thursday night, April 19, from 7 to 9 p.m. at Kelly's Restaurant. Hound Dogs Family Band, Formula and David Neal are playing.

Every time I catch a local band on a patio, in a bar, at a wedding, at a festival or wherever, I'm always impressed. I'm no music critic, but I do think we have some incredible talent here. I wanted to get a little back up for my thoughts, so I called John Harper, a local DJ and music writer, to ask his opinion. Does the Outer Banks have a special musical crop?

"There are definitely some high-caliber musicians here," he agreed.

John has his favorites. He thinks the Outer Banks standouts are Joe Mapp, Mick Vaughn, Dan Martier and Kevin Roughton. He threw a lot of names around, though, like Buzz Bessette, Ed Tupper, Chris Whitehurst, Matt Hoggard and many others. John's favorite local singer songwriters are Matt McGuire and Sean Bendula, two guys he says "could go to the next level." John wasn't surprised by the recent success of Molasss Creek. When he saw them play recently at the Outer Banks Sounds showcase, he said the band sounded like a well-oiled machine.

The local musicians add so much to the quality of life on the Outer Banks. We have such a great mix of bands and musicians playing in bars and clubs, at fund-raisers (often for free) and festivals. Do we value them enough? What would our lives be like without such a great variety of music? The next time you hear an awesome acoustic player or band, tell them in person you enjoyed the show. Show them some love on Facebook. Better yet, tip them.

The local bars and clubs have started their live music lineups for spring, and there will be even more coming for summer. Get out there and enjoy some of the local music. The rest of this week you can choose from BC, the Wilders, the Walker Brothers, Cade's Cadence, Broughton Aycock, Ask Fester, The Critters, Fishlips, Pairadocs... and that's just a small sampling.

Of course, talent is also trucked in to the local clubs from afar. That's another perk of living in a tourist town. Some places, like Outer Banks Brewing Station, Kelly's, Port O'Call and The Pit, bring in some fairly big-name bands that wouldn't think of making a stop anywhere else in northeastern North Carolina. Take a look around our Nightlife listings. You'll see that there's music for your ears every single night around here.

I've got a couple of other things to tell you about.

DCAC is showing a movie called You Don't Know What I Got on Saturday night at RIFP at 7 p.m. It's a documentary focusing on five women who have an extraordinary passion for life. The director will be there to answer questions about the film.

Earth Day is Sunday. You can take a free Wolf Howling Tour at Alligator River on Saturday night in honor of the day.

The marvel that is Bike Week starts this week and lasts through next weekend. Expect all the usual deafening motors for 10 solid days. Bike Week actually extends over two weekends and the events are spread out along the Outer Banks, though the majority of happenings are in the Nags Head/KDH/Kitty Hawk areas. Vertigo Tattoo in Manns Harbor holds its Outer Banks Bike Rally starting next Wednesday through Sunday.

The Flying Pirate Half Marathon is Sunday, starting in Kitty Hawk. On Saturday they have other events, like a 5K (sold out) and the Storm the Beach Adventure Race. Spaces are still available for Storm the Beach, and you can register at the Expo on Friday at Dare County Family Rec Park, or you can register on site at the event at the KDH bathhouse well before 1 p.m.

Check our listings for many other fun and enlightening events. I couldn't list them all here, so you'll have to check our By Day and Outer Banks Nightlife listings. And don't forget to enter our Facebook Giveaway this week (see below).

Before you go, who's your favorite Outer Banks musician/musicians? Make a comment below on the Add Your Voice button.

This week you have a chance to win a $50 gift certicate to Gray's Department Store plus a $40 gift certificate to The Lifesaving Station Restaurant at the Sanderling!

For more information about The Lifesaving Station Restaurant, check out their website.

You won a free tandem kayak rental from Hatteras Watersports plus a $25 gift certificate to Atlantic Coast Cafe!

For more information about Hatteras Watersports, check out their website.

For more information about Atlantic Coast Cafe, check out their website.

With To-Go Steamer Pot Purchase of $60 or more.