The New Gateway to Wildlife Adventures 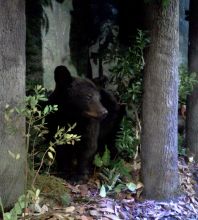 First, the happy: yet another reason to visit attraction-packed Roanoke Island. The U.S. Fish & Wildlife Service has just opened its $6 million National Wildlife Refuges Gateway Visitor Center on the north end of the island, and it is a beauty!

The building is tucked back on a wooded lot about a quarter-mile north of the entrance to Fort Raleigh National Historic Site. If you didn't know it was there, you might miss it. You can hardly see the building from U.S. 64 and the sign is small, but it's definitely worth seeking out. (DOT signage will guide you there too.)

The purpose of the Visitor Center is to inform visitors about the 11 National Wildlife Refuges and one National Fish Hatchery in northeastern North Carolina and southeastern Virginia: Back Bay NWR, Mackay Island NWR, Great Dismal Swamp NWR, Currituck NWR, Roanoke River NWR, Pocosin Lakes NWR, Alligator River NWR, Pea Island NWR, Mattamuskeet NWR, Swanquarter NWR, Cedar Island NWR and Edenton National Fish Hatchery. These wild places are within daytrip distance of the Outer Banks, waiting to be explored, giving us endless opportunities to connect to nature. But we - local residents and visitors from afar - don't visit them nearly as much as we could (and should!).

Through hands-on and interactive exhibits, the Visitor Center introduces these federally protected areas in the hopes of attracting more visitors to the region's National Wildlife Refuges. Several dioramas depict the wildlife found in the refuges. Life-like black bears, red wolves, waterfowl, otters, snakes and other animals are staged in very real-looking nature scenes. There's even a wolf den, where you can switch on a light to see wolf pups sleeping. Interactive exhibits help visitors learn about managing refuges and about protecting the nation's wild lands. There's a movie room, set up to resemble an old shack with a wood stove, where you can watch short films about the history of the region and the beauty of the refuges.

My favorite exhibit, and probably many other people's too, is the airplane simulator (Flyover Exhibit). In the cockpit of a real Cessna, you can grab the wheel and pretend you're flying over the region's wildlife refuges. At the push of a button, aerial scenery from each refuge is projected onto a screen in front of you. At the same time, a woman's voice tells you about what you're seeing over the radio, interrupted by static breaks, just like on a real plane.

The aerial video footage of the refuges in the exhibit is so stunning that I had to ask Bonnie Strawser, manager of visitor services at Alligator River and Pea Island NWR, about it. She told me a story of how that came to be. When the exhibits contractor, Wildnerness Graphics Inc., was designing the Visitor Center exhibits and had the idea for the plane, they had budgeted a pretty hefty sum for getting a real plane for the exhibit and planned on using images from Google Earth for the videography. However, it turned out that the Fish and Wildlife Service was able to acquire a slightly damaged surplus Cessna from the U.S. government for free through excess property. With the money they saved, they were able to contract aerial videography of the 11 wildlife refuges. They hired a helicopter with a high-def, remote-controlled camera on the nose and shot incredible footage of the coast, wetlands, rivers, pocosins, forests and many other ecosystems of the refuges. There's one segment of an eagle flying that you have to see to believe. It looks 3-D.

The National Wildlife Refuges Visitor Center on Roanoke Island has been a career dream for Bonnie Strawser. She's been with the Fish & Wildlife Service for 33 years, and she's been trying to create this center for 25 of them. In the mid- to late 1990s, Strawser and two volunteers, Bob Webster and Patsy Zoll, working under the auspices of the Coastal Wildlife Refuge Society (the refuge non-profit support group), implemented a large-scale fundraising effort to solicit private funds to build this facility. The Society signed an agreement with the U.S. Fish & Wildlife Service in which the Society committed to rasing the funds for construction and the Service committed to purchasing land on Roanoke Island for the facility. In 1996, the Service purchased 35 acres on the north end of Roanoke Island for about $600,000 and began the required archeological evaluations to have the site approved for construction. The society wasn't able to raise enough money for the Roanoke Island center, but they did design and build a smaller Visitor Center for Pea Island National Wildlife Refuge during that time period. So the Roanoke Island dream was shelved.

Then, in 2009, along came the American Recovery and Reinvestment Act. Because of the previous planning, the Visitor Center project just so happened to meet the exact qualifications required for stimulus money, and $6 million was appropriated for the center on Roanoke Island. $800,000 went to the exhibits alone.

"It was a case of hard work meets opportunity," corrects Webster.

Though the new visitor center represents 11 wildlife refuges from Virginia and throughout coastal North Carolina, the Roanoke Island location does make sense. This is one of the most highly visited areas of the region and there's a captive audience already here. Strawser believes this will be one of the most visited NWR visitor centers in the nation. And that means more people will visit the refuges.

"We want people to get comfortable with the refuges so they can go out and adventure on their own," says Strawser. "I personally believe that within five years of opening this visitor center, we'll see an increase in visitation by 50 percent."

The exhibits worked on me. I have visited several of the wildlife refuges in the area, but after visiting this center, I can't wait to explore them further and to visit more of them. These are areas of such rich beauty and abundance, and the Visitor Center is a testament to that.

The Visitor Center also has classroom space, a 130-seat auditorium and a gift shop with nature-themed books, toys, reference materials, jewelry and more. The National Wildlife Refuges Gateway Visitor Center is open daily from 9 a.m. to 4 p.m. and it's free to visit. They plan to offer programs in the future, so stay tuned.

Exploring the center is great, but if you want to really get out there in the refuges, there are many ways to do it.

Alligator River NWR on the Dare County mainland offers guided Tram Tours through the refuge for $7 per person (kids 12 and younger go for free).Tours are held Tuesdays from 8:30 to 10:30 a.m. Alligator River NWR is home to the largest population of black bears in eastern North Carolina and one of the largest in the eastern United States and it is the only place in the world where endangered red wolves live in the wild. Alligator River offers a black bear-sighting program called Bear Necessities on Wednesdays. You meet a ranger out in the refuge, and they'll take you to a good bear-sighting location. That one is from 5:30 to 7 p.m. Just after that, on Wednesdays starting at 7:30 p.m., you can go on a Red Wolf Howling Safari. You won't actually see the red wolves but you will learn about them from a guide and you'll be able to hear them howl and howl with them. Registration is required for the Howling. Alligator River staff offers Canoe Tours in the backwaters of the refuge on Wednesday and Friday from 9 a.m. to noon. Learn all about the Alligator River programs here.

Outside of the refuges, here are a few more things going on this week:

The Red Nose Wine Festival, a fund-raiser for the Outer Banks Relief Foundation, will be held on Thursday from 3 to 8 p.m on the Manteo waterfront (over at the Marshes Light community). Local bands, wine tastings and food will be available for $35 per ticket.

The OBX Summer Arts Festival is going to be on Wednesday (10 a.m. to 6 p.m.) and Thursday (10 a.m.to 4 p.m.) at the Hilton Garden Inn in Kitty Hawk. Meet some of the best local artists and see their work. Admission is free.

There are only two weeks left of Roanoke Island Festival Park's wonderful summer shows presented by North Carolina universities. This week the children's show, The Tortoise and the Hare, is at 10:30 a.m. The evening show is Ain't Misbehavin', the music of Fats Waller, at 7 p.m. in the indoor theater.

Keep looking around our By Day and Nightlife listings for hundreds more ideas for things to do.

Now, the sad news. One of Roanoke Island's native sons, H. A. Creef, passed away last week. Creef was well known as the owner and operator of The Pioneer Theatre as well as the Duke of Dare Motor Lodge. Generations of Manteo movie-goers knew and loved Creef. He was at the theater that's been in his family for generations every night, straightening out all the local kids, serving good but cheap popcorn and drinks and providing what local parents jokingly called the best and cheapest babysitting in town. Downtown Manteo will not be the same without H. A. Creef, but his son, Buddy, is doing his best to take over where his dad left off. And that's a great thing for the families of the Outer Banks. Rest in peace, Mr. H. A.

And I'll swing back to some good news before I let you go. Our Facebook giveaway this week is a great one! Donnie Just, owner of 1587 and Tranquil House Inn in Manteo, is giving away a $300 package that includes one night at the inn and a dinner for two! Be sure to register to win.

Have a great week!

This week you have a chance to win a dinner for two at 1587 Restaurant and a free night stay at the Tranquil House Inn!

For more information about 1587 Restaurant, check out their website.

For more information about Ocean Boulevard Bistro & Martini Bar, check out their website.