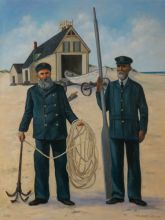 As a storyteller, I’ve learned that every exciting tale needs a few key elements: compelling characters, conflict, high stakes and a killer location. Above all, though, the story needs to represent something bigger – an idea or reason that the story applies to us and our world too – something that demonstrates how the story impacts history and our present day. This explains why the story of Richard Etheridge and the Pea Island Surfmen is a favorite on the Outer Banks. Although niche to the area, this nevertheless fascinating piece of local and national history merits the attention of everyone, no matter their age or hometown.

The nation’s first all-black U.S. Life-Saving Service Station made its home on Pea Island in 1880. As a result of their seafaring service and their work in conjunction with the white-crew stations around the Outer Banks, they became immortalized as heroes off-shore and as pioneers for social diversity. 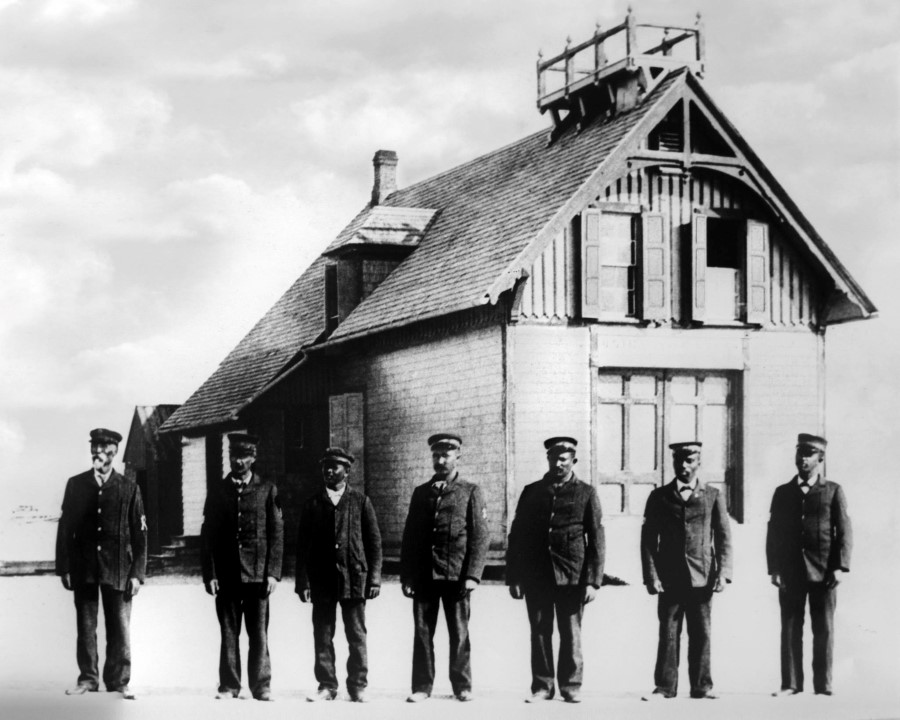 A historic photo of the Pea Island Life-Saving Station crewmen (Captain Etheridge is on the far left), Facebook

Richard Etheridge was born into slavery on Roanoke Island. He learned how to read and write and additionally served as a sergeant in the Civil War. Following the Emancipation Proclamation, he was appointed as the keeper at the U.S. Life-Saving Service Station at Pea Island – the first black keeper in the nation, a position he maintained until 1900.

Etheridge ran the all-black crew of surfmen with the same standards he used as a military sergeant, and his station garnered a reputation as “one of the tautest on the Carolina coast.” This didn’t happen without significant struggles, however. One may think that a seaman’s standard opponent is the ocean, but for this crew, they faced prejudice from some white members of other stations who refused to work with the blacks at Pea Island. They even had their station burned down at one point.

For the most part, however, the crew at the Pea Island Life-Saving Station prevailed. Their story is marked by the role they played in the collective work done by life-saving stations located across the Outer Banks. In October of 1896, when hurricane conditions blew the E.S. Newman (en route from Providence to Norfolk) 100 miles off-course, the Pea Island Lifesavers sprang into action. They entered the treacherous waters, not once, not twice, but 10 times to rescue the entire crew of from the ship, an act that distinguished them as national heroes.

The legacy of Etheridge and the Pea Island Life Saving Station continues today. A bronze statue of Richard Etheridge stands in the traffic circle at Bideford and Sir Walter Raleigh Streets in Manteo, and the efforts of Etheridge and his crew are honored with a marker on the grounds of the North Carolina Aquarium on Roanoke Island. The North Carolina Department of Transportation recently named its new bridge on Pea Island as the Captain Richard Etheridge Bridge. 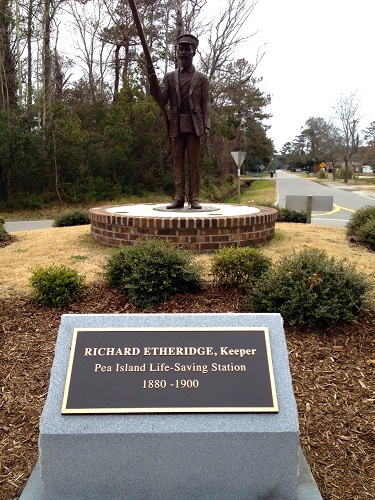 And the Pea Island Preservation Society (PIPSI) continues to share the story long after the station was closed in 1947. Their dramatic presentation Freedmen, Surfmen, Heroes: The Unique Story of the Pea Island Life Savers breathes life back into this long-past story. Descendants of the Pea Island Life-Savers, Joan and Darrell Collins, tell the history of these brave men along with the help of costumed interpreters who re-enact the rescue of the E.S. Newman.

Freedmen, Surfmen, Heroes presentations only occur a few times during the summer at the North Carolina Aquarium on Roanoke Island: Thursday, July 12 and Thursday, August 9. Gain a new sort of knowledge and appreciation for this history of unity, cooperation, bravery and equal opportunity by checking out a showing of Freedmen, Surfmen, Heroes at 11:30 a.m. and also 1:30 p.m. The program is fun and engaging for visitors of all ages, and admission to the show is included in your aquarium ticket. The North Carolina Aquarium on Roanoke Island is at 374 Airport Road in Manteo; call (252) 475-2300 for more information.

If you want to know the whole story about Captain Richard Etheridge and the Pea Island Life Savers, read Fire on the Beach by David Wright and David Zoby. It's a riveting book that reads like a historical novel. You'll find it in local bookstores.