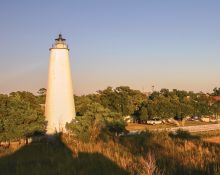 Ocracoke’s little white-washed lighthouse is the most prominent landmark on the island, and it has become an iconic symbol of the island’s strength. The lighthouse has stood the test of time since 1823, surviving storms and floods and the changes of time, just like the island’s people.

Ocracoke Lighthouse is the shortest of the Outer Banks lighthouse and it’s not open to climbing like the other three local lighthouses, but it’s just as beloved as the others. The lighthouse and its surrounding buildings, green lawn and white fence form the most picturesque and charming setting, one that people love to visit again and again, no matter how many times they’ve seen it.

The Ocracoke Light Station site, managed by the National Park Service, is in the heart of the village along Lighthouse Road. The site includes Ocracoke Lighthouse, Double Keepers’ Quarters, Carpenter’s Shop, Store House, Cisterns, Privy, Oil House and Generator House. All of these buildings are historic except the Generator House. The lighthouse is still a working light and seeing its beacon across the island at night is a sight you won’t forget.

Two centuries ago, Ocracoke Inlet was one of the busiest inlets on the East Coast. The inlet was the only navigable waterway for ships accessing the busy inland ports of Elizabeth City, New Bern and Edenton. Because the inlet was so busy, the U.S. Lighthouse Service recognized that mariners needed assistance in the inlet. At first they hired local pilots to help mariners navigate the inlet, and back then Ocracoke village was known as Pilot Town. The first lighthouse at Ocracoke Inlet was built on nearby Shell Castle Rock, an island between Ocracoke and Portsmouth islands, in 1798. Almost immediately after it was completed, shoaling and changes in the inlet rendered the lighthouse completely ineffective. In 1820 a light ship was positioned in Ocracoke Inlet, but it also soon proved inadequate.

The current Ocracoke Lighthouse was built of brick in 1823 and was designed to be 25 feet in diameter at the bottom and 12 feet in diameter at the peak. Its brick exterior was whitewashed by blending lime, salt, Spanish whiting, rice, glue and boiling water and applied while hot. An octagonal lantern was built on top to house the oil-fueled light beacon. A one-story keeper’s house was built at the same time.

A fourth-order Fresnel lens was installed in 1854. Early in the Civil War, Confederate troops dismantled the lens, but it was re-installed by Union forces in 1864. The lighthouse was electrified in the early 1900s. 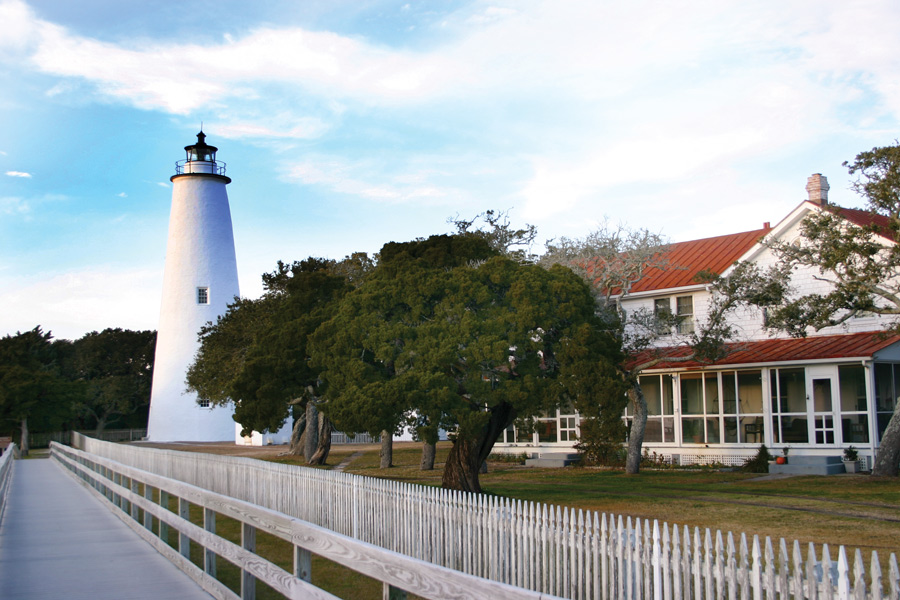 The original keeper’s house was expanded to two stories in 1897 to house an assistant keeper and his family, making it a Double Keepers’ Quarters, which still stands on the site today. The keepers maintained the buildings and grounds, hauled oil, trimmed wicks and polished the lens. They also fished, hunted, raised livestock, gardened and participated in village life.

Today the lighthouse is fully automated and no longer needs resident keeper. According to the National Park Service, the present-day light equals 8,000 candlepower and can be seen 14 miles at sea. Ocracoke Inlet is not nearly as busy an inlet as it once was, but the light is helpful for the fishing vessels and pleasure boaters that pass through the tricky inlet. It’s the oldest lighthouse on the Outer Banks and the second oldest operating lighthouse in the nation. 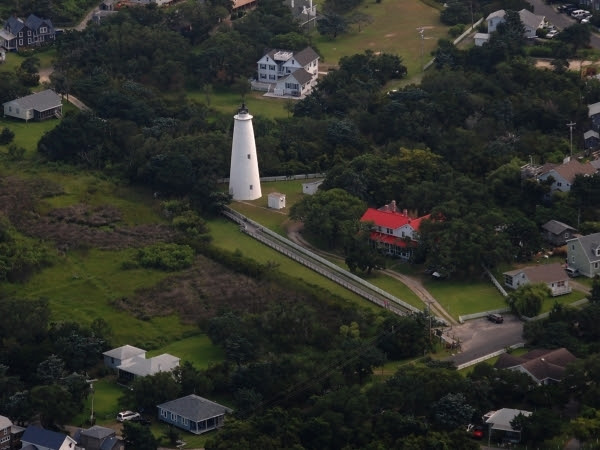 The historic Ocracoke Light Station buildings were damaged in recent storms, including Hurricane Dorian, and it’s feared that they might be further damaged in future storms exacerbated by climate change and sea level rise. For this reason, the National Park Service has been looking at ways to protect the lighthouse and its buildings. In August the National Park Service announced that they will elevate double keepers’ quarters by four feet and raise the carpenter’s shop, store house, privy and generator house by two feet. The Ocracoke Lighthouse and oil house will not be elevated. All buildings and the lighthouse will be repaired and painted.

The work includes removing what’s called shotcrete from Ocracoke Lighthouse exterior and replacing it with a coating that will protect the masonry and provide moisture control. They’ll also replace damaged masonry, replace windows with historically appropriate windows, repair leaks at the top lantern, recoat interior masonry, expose the original stone foundation and replace the interior metal staircase with a wooden spiral staircase to match the original material and orientation.

Ocracoke Lighthouse can be visited daily. The lighthouse is not open for climbing, but you can walk around the site. Bring your camera because you will want to take pictures.