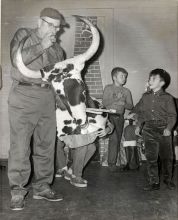 “Christmas comes twice on the Outer Banks,” exclaimed my brother while walking around Duck. While the sight of free cheese samples elicited this exclamation, he had a point. While the rest of the world keeps their Christmas Day confined to December 25, Rodanthe residents go above and beyond by celebrating a second Christmas – Old Christmas – each year.

Old Christmas falls on January 6, marking Epiphany or Twelfth Night. The tradition began in Britain, where the English observed this as Christmas day before the mid-1700s. In parts of country, they still celebrate Old Christmas. Even after the English adopted the Georgian Calendar (with the December 25 Christmas), the settlers in the Outer Banks remained loyal to the Old Christmas date. Whether this is because no one told them about the calendar change or because they simply liked the tradition is up for debate.

As a result of this tradition, the villagers in Rodanthe and Waves took turns going north and then south to visit each other for Christmas and Old Christmas. The result produced two Christmas celebrations, and let’s be honest, who really wants to give up that?

In Rodanthe Old Christmas brings several traditions with it. Perhaps most notably is the visitation of Old Buck, a figure of English folklore. Legend has it that this bull-like creature haunted the Buxton woods, terrorizing herds of cattle and local farmers and that his spirit still survives. Old Buck, however, isn’t all scary – to the children and adults of Rodanthe, he symbolizes a connection between the dead past with the living present, where those celebrating Old Christmas also celebrate a day of being reconnected with deceased loved ones.

Rodanthe residents traditionally spent Old Christmas by waking up with fife and drum music on January 6, putting on their homemade masks and singing carols as they waited for the arrival of Old Buck in the evening. And according to stories, the day also presented a time when young ladies caught a glimpse of their future husbands for the first time, and villagers put the past year’s arguments to rest, often with a drunken brawl!

The town’s Old Christmas moved away from those activities over the decades, but the holiday continues its active role in Rodanthe’s holiday season. Instead of the festivities always happening on the 6th, islanders now celebrate Old Christmas on the first Saturday after Epiphany so that out-of-town Rodanthe natives can make it home for the weekend.

It doesn’t matter if you’ve awaited Old Christmas’s return each year or if this is your first time observing it – you’re welcome to join the festivities at the Rodanthe-Waves-Salvo Community Center this Saturday (which happens to be January 6). Local children, adults and visitors attend this event, and it includes tall tales of the area, candy-making, oyster roasting, games and singing Christmas carols. The moment that everyone waits for, however, is the arrival of Old Buck.

The music turns eerie to usher in this strange creature (operated by two islanders covered in a blanket and puppeteering a horned mask). Old Buck proceeds to prance amongst the crowd, stirring up both delight and chaos. He then disappears, presumably returning to his haunted woods.

If you can’t make it out to the event at the Rodanthe-Waves-Salvo Community Center on Saturday, there are ways you can celebrate Old Christmas in your own home.

First and foremost, you need the company of family and/or friends. The point of Old Christmas that it’s a time to come together with those you may not see as often. Hanging onto any hard feelings? Now is the time to resolve those.

Next, roast up some oysters. Check out this link for where you can pick up fresh oysters for your menu.

When everyone gathers ‘round for food and friendship, share your favorite legends and local lore; it’s a great way to share your yarn-spinning prowess and learn new stories about the area.

Finally if you’re feeling up to it, why not invite Old Buck to make an appearance at your event? Making the costume or mask for this wild bull is a great Old Christmas activity for children.

Now you’re finally ready for an Outer Banks Old Christmas. This is a one-day event, so if you’re looking for other Outer Banks activities to fill your time, be sure to check out our Daytime Events listings. For a guide to evening music, game nights and more, our Nightlife listings tell you about all the goings-on between Corolla and Ocracoke.