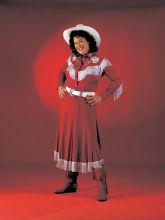 In 2002, country music artists and industry members voted Virginia "Ginny" Henseley No. 1 on CMT's 40 greatest Women of Country Music. Rolling Stone magazine ranked her as 46th in the The Greatest Singers of All Time.

Her name not ringing a bell?

"Ginny" is best known as Patsy Cline, a pioneer in gaining acceptance for women artists in the country music genre and one of the first country singers to successfully cross over into pop music.

On Wednesdays from July 2 to August 13, the late Patsy Cline will come alive again when Laura Martier takes to the stage at Hilton Garden Inn to perform in Portrait of Patsy Cline, produced by Elizabeth R and Company.

Most tribute shows depend on mimicry, but Martier's performance has proven to be more along the lines of channeling the great singer. "It takes a lot of focus and concentration," said Martier, who debuted in the musical at the Theater of the American South festival in Wilson last year before the play came to the Outer Banks for an eight-performance run.

A review of the play by HispanicBusiness.com reported, "She knows the music and the lyrics, and she works to perfect every vowel sound and every crack in her voice when she performs the songs that made Cline famous."

After seeing Portrait of Patsy Cline, Bill Page, Arts Council of Wilson executive director, told the Wilson Times, "You will not hear a better voice than Laura Martier's; she hits it like no one else can."

The raves didn't stop there. Many who saw the show on the Outer Banks came back and brought friends because they just couldn't get enough of this extraordinary performance.

Portrait of Patsy Cline isn't the first time Martier has performed the role of Patsy. In 2011, she appeared as the singer in the Outer Banks Forum for the Lively Arts season opener, Always...Patsy Cline. Her performance received standing ovations and rave reviews. That play centered on her friendship with one of her fans so was limited in time scope in the singer's life.

Portrait of Patsy Cline expands far beyond that, and the list of 32 songs includes some that Patsy never recorded but probably helped to plant the seed to become a music artist. There is biographical monologue interspersed between numbers that will give theater goers a better look into the life of the famous songstress.

One of my favorite songs in the play is Can't Help lovin' Dat man. Helen Morgan who originally sang the song was one of Patsy's inspirations, and you can sometimes hear it in Patsy's phrasing and tone," said Martier. Morgan sang the song in the 1930s version of Show Boat.

Portrait of Patsy Cline also includes a top-notch band. "I can't say enough about how great the band is," said Martier, referring to the Tumbling Humble Weeds.

The band includes well-known musicians Skip Hancock on keyboard, Dan Martier on drums, Joe Mapp on guitar, Bill Rea on bass and Charlie Austin on fiddle. And new to the band this summer is Ben Lassiter, a well-known lap steel guitar player from Virginia Beach.

"The play's first act ends with the gospel song Just a Closer Walk with Thee - it is so powerful that I really enjoy singing it," said Martier.

Throughout the first act, Martier wears a red cowgirl outfit similar to that made by Patsy's mother and in which she performed in her early career.

But the buckskins were packed away after Patsy performed and was chosen as a winner on Arthur Godfrey's Talent Scouts. The show -- the launching pad for other notables including Tony Bennett, Lenny Bruce and Pat Boone -- was a contest similar to modern day shows like American Idol and The Voice. But in 1957, when Patsy competed by singing Walking after Midnight, the winner was determined by an applause meter.

The national recognition gave the performer the boost she needed, and Godfrey insisted it was time for her to wear evening gowns and lose the cowgirl look.

As an added treat this year, Elizabeth R and Company has partnered with the Hilton Garden Inn to create a dinner and show package so that attendees can make an evening out of it. The package includes a three-course dinner in the Garden Grill and Bar before the show. After dinner, enjoy a great night of entertainment in the ballroom, all for just $50 plus tax. The package is available only with advance purchase. Those who choose to attend just the show can buy advance tickets for $25 plus tax or pay $30 at the door.