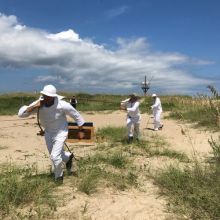 This Thursday, August 16, 2018, marks history. We’re talking big history too, with local, national and even international significance. The wildest part? It’s all happening right here on Hatteras Island, in the little village of Rodanthe.

One hundred years ago, on August 16, 1918, one of the most heroic ocean rescues in U.S. Coast Guard history occurred off of Hatteras Island’s coast. In tempestuous conditions, the Chicamacomico Life Saving Station’s crew rescued 42 seamen from the burning Mirlo over a seven-hour long period. If that doesn’t impress the socks off of you, it’s just the beginning of what makes this rescue noteworthy.

History nerds, rejoice, because here’s a bit of background:

The Mirlo was a British flag tanker carrying 5,000 tons of gasoline from New Orleans to England to fuel British and French efforts in World War I. As those countries lacked petroleum resources at the time, the United States played an active role in their war efforts by supplying a significant amount of their liquid fuel. Since many Allies’ ships frequently voyaged between the East Coast and Europe, German U boats lurked around choke points, or places along the route from the United States to Europe that cargo ships had to pass through, and waited to attack. One of these choke points included Cape Hatteras. 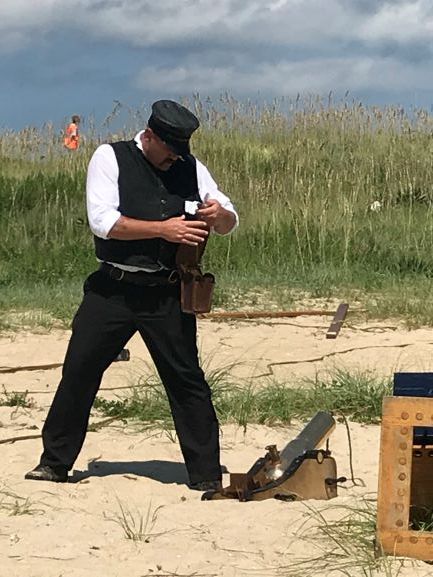 When the Mirlo passed 7 miles off of Hatteras Island’s coast, a U-boat torpedoed it, damaging the ship and igniting the gasoline supply. The Chicamacomico Life Saving Station’s keeper, John Allen Midgett, Jr., heard the attack from the station. He sounded the alarm, and his crew sprang into action.

In mere minutes, the crew readied Surfboat 1046 for the rescue and launched it into the ocean (no easy feat considering that the launch is one of the most dangerous parts of the rescue mission). The first 50 yards of surf are generally some of the roughest conditions in the ocean, and the addition of 15-foot surf and stormy conditions on August 16, 1918, presented the Chicamacomico crew with even more difficulties.

After four attempts to pass the line of breakers, the crew made it only to face their next challenge: getting through a wall of fire to reach the British seamen trapped aboard the burning ship. Against the odds, the Chicamacomico crew rescued 42 of Mirlo’s 51-person crew and brought them to land over the course of four trips. The nation lauded the Chicamacomico Life Saving Station’s performance, and their actions were highly celebrated in Great Britain too. Both countries presented the crew with medals and praise, and the Mirlo rescue went down as one of the most impressive in the U.S. Coast Guard’s history. 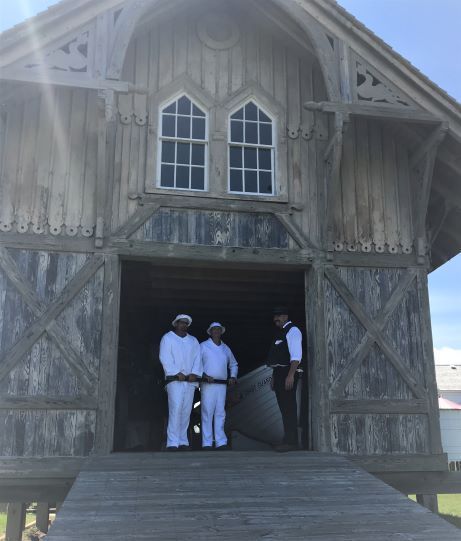 Guess what, you can be a part of the history too! The Chicamacomico Life Saving Station celebrates the centennial of the Mirlo rescue this Thursday, and you’re invited.

Come to the Rodanthe-Waves-Salvo Community Building at 10 a.m. this Thursday for the Mirlo Rescue Symposium. Leaders in the fields of German U-Boats, Coast Guard history and surfboats and authors will thrust you into the heart of everything we know about this heroic Chicamacomico crew, the significance of their actions on August 16, 1918, the German U-Boat campaign in WWI and the mysterious Mirlo, lost somewhere in the depths of the Atlantic . . . and for how much longer?

Honors and prestige unfurl in the afternoon, starting with the station’s weekly Beach Apparatus Drill happening as usual at 2 p.m. The program is followed by the address by the Centennial Event’s keynote speaker. Next, a flyover by the U.S. Coast Guard’s Elizabeth City Air Station accompanies Commander Richards Underwood, representing the British Royal Navy, reading the names of the Mirlo seamen who didn’t survive, complete with the Wreath-Laying Ceremony. A band concert concludes Thursday’s event.

Thursday’s ceremony is the keynote event in a week dedicated to remembering the Mirlo rescue. Throughout the week, you may have heard about or even attended an art reception at the Dare County Arts Council Gallery, a Mirlo exhibit and reception at the Graveyard of the Atlantic Museum, guided tours of historic Hatteras Island and a ticketed dinner for the descendants of the Mirlo rescuers. A local art fair and festival at the Rodanthe-Waves-Salvo Community Building also happens on Friday from 10 a.m. to 5 p.m. 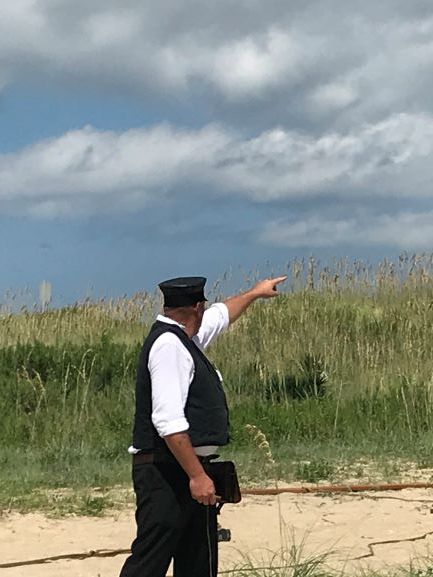 This grand centennial week is the culmination of years of planning and work. The Chicamacomico Historical Association began its preparations in 2014. Their efforts went into restoring and renovating the 1847 and 1911 Life Saving Stations, including replacing both structures’ roofs. Other groups and organizations took notice of the Historical Association’s work and wanted to join the preparation process. The National Park Service donated $40,000 to the project, which went toward rehabilitating the Motor Surfboat 1046 from the 1918 rescue. Over the next several years, more and more local organizations and businesses made their own contributions in the form of money, donating supplies or dedicating time and energy to organizing the event.

Cooperative efforts like these at local and national levels were elaborated by the addition of contributions from the United Kingdom, as illustrated by the Royal Navy’s presence at Thursday’s ceremony and Trevor Williams, an underwater researcher from Liverpool and descendant from the Mirlo crew, ringing the bell as Commander Underwood reads the names of the lost seamen.

If you’re on the Outer Banks this week, make the trip down to Chicamacomico Life Saving Station in Rodanthe to participate in this historic event. The Rodanthe-Waves-Salvo building,just across the street, will be open throughout the day with an air-conditioned seating area and bottles of water for anyone who needs a break from the heat.

Be sure you check out the other events happening in the area too, all listed in our Daytime Events listings.

All photos by Hannah Lee Leidy