Sharing our Beaches with Sea Turtles 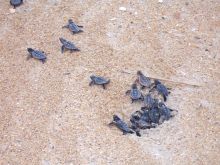 I'm slightly obsessed with sea turtles. This started about eight years ago following snorkeling trip in the Bahamas in which I had the good fortune to follow a female loggerhead for a good 15 minutes. At one point the turtle turned and looked straight at me. I'll never forget that turtle's haunting stare into my eyes. It seemed like we held that gaze for 30 seconds, though it was probably 10, but that simple gaze is by far one of the most memorable moments of my life.

Soon after that my husband and I freed a leatherback turtle from a fisherman's gill net. We were boating near Oregon Inlet and found the turtle struggling in the net. My husband unwound its leg from the webbing. Maybe I imagined this, but that turtle seemed to look back at us as it swam away.

Not much longer after that my husband and I were fishing in the Pamlico Sound near Casey's Island south of Ocracoke Island. A sea turtle - I think it was a green sea turtle - poked its head up out of the water right next to the boat. The turtle hung around the boat for longer than is normal, prompting me to imagine that it was sending me some kind of message. I fully own up to my proclivity to seeking portent messages from nature and I believe in animal totems and personal messages from the natural world. Call me crazy, but if a heron lands on my rooftop or I get face to face with a deer or turtle, I like to look for the meaning in it instead of just chalking it up to coincidence. So I researched sea turtle as an animal totem and learned a powerful lesson.

As an animal totem, the sea turtle is telling us to slow down and savor the small things. One of the texts I read says this: "Sea turtle reminds us that the only way we can expect inner health is by giving ourselves time to heal and grow, to value ourselves not just for the speed at which we can work, but also at how much we can slow ourselves down and relax... Sea turtle teaches us to 'let go' of having an iron control over our lives and to follow the currents instead."

OK, universe, point taken. That's a message that I always need to hear. I'm kind of a high-energy person and I have to make myself sit still. So the sea turtle message of slow down is perfection for me. And now when I'm really busy and doing too much, I see sea turtles in my dreams, especially that one that looked right at me in the Bahamas.

So every year I'm always interested in sea turtle season on the Outer Banks. The Outer Banks is one the northernmost regions for nesting sea turtles. Five species of sea turtles are found here - the leatherback, hawksbill (rarely seen), Kemp's ridley, loggerhead and green. While all five of these sea turtle species can be found in the ocean here at various times of the year, the female loggerheads, greens and occasional leatherbacks are the ones that nest on these beaches. In early to mid-summer, female sea turtles come ashore to the same beach that they hatched on to lay their eggs. The average turtle nest contains 75 to 150 eggs. Fifty-five to 80 days later the turtles hatch. It's unfortunate for the sea turtles that they have to hatch in the height of tourist season, when the beaches are so crowded with human activity. But isn't it rather interesting that sea turtles are coming closest to us humans in the summer, especially if you believe that their message to us is to slow down, take more time, savor life.

Sea turtle nests are marked off with stakes and tape. It's very important to keep dogs and children out of these marked-off areas. Baby sea turtles have the odds stacked against them already, and they can't afford a trampling of their nests. Mother sea turtles don't hang around with their nest. They lay their eggs and move on, so when the babies hatch they're on their own. Instinct guides them toward the sea - provided artificial light doesn't point them in the wrong direction. But the path to the sea is a precarious one for a baby sea turtle. If the turtle doesn't get eaten by a gull or cat or fox on its way to the sea, it might fall into a hole that was dug by a kid that afternoon. Or it might waddle in the the wrong direction entirely, thinking it's following the moonlight toward the sea when indeed it's headed toward a porch light.

The sea turtle nests are hatching throughout August on the Outer Banks. Thousands of little sea turtles are trying to make their way to the sea. What can you do to help them?

ï® If you see a hatching nest, don't shine lights at the nest or take flash photography. Get out of the way and let the turtles make their way to the sea. Most of the local nests are closely watched and staffed by volunteers or staff members as they hatch, so your likelihood of seeing a nest hatch without a team of humans is slim.

- Turn off any exterior lights on oceanside houses. These lights can divert turtles from where they need to go - the sea!

- Do not disturb nest markers or the nest sites.

- Pick up your toys after your beach day - chairs, umbrellas, tents, etc. Fill in holes and flatten sand castles.

The National Park Service says the greatest threat to sea turtle survival is human activity, including the loss of nesting habitat due to coastal development, drowning in fishing gear, being hit by boats, disturbance of nesting beaches (development, beach lighting, sea walls, jetties, items left on the beach overnight, and nighttime activity on the beach), pollution and non-degradable debris in the ocean, and harvesting of eggs and adults for food and commercial goods.

If you're interested in sea turtles, you can learn more about them at the North Carolina Aquarium on Roanoke Island. The U.S. Fish and Wildlife Service also holds Turtle Talks on Tuesdays from 2:30 to 3:30 p.m. at the Pea Island Visitor Center on Hatteras Island. You'll learn about sea turtles, find out about their conservation and participate in a take-home craft. The Outer Banks Center for Wildlife Education teaches a program called Sea Turtles in Jeopardy on Fridays at 1 p.m. The program teaches about sea turtles and how we can help in their conservation. On Fridays at 11 a.m., the National Park Service has a class on Sea Turtles at the Hatteras Island Visitor Center next to the Cape Hatteras Lighthouse.

So what are you going to do on the Outer Banks This Week?

Here's an idea: The New World Festival of the Arts in Manteo. This outdoor art show features more than 80 artists showing and selling their work along the waterfront. It makes for a great time in Manteo, because besides exploring the visiting artists, you can have lunch, tour the attractions and browse in the local shops. The show is held on Wednesday and Thursday from 10 a.m. to 6 p.m. On Thursday in Manteo you'll also find a group of local artists selling their artwork at Magnolia Market on the corner of Queen Elizabeth Street and Ananias Dare Street.

Families take note of the Outdoor Movies on the Lawn on Friday, sponsored by the Children at Play Museum in Kitty Hawk. Movies are shown on the lawn next to Pamlico Jack's in Nags Head. Admission is just $5 a car for parking. Friday's movie is Madagascar: Escape to Africa. Bring a lawn chair or blanket.

Another fun event this weekend is the Virginia Dare Faire on Saturday from 9 a.m. to 1 p.m. The Lost Colony staff, cast and crew holds this family-fun event as part of the 425th birthday celebration of Virginia Dare, the first English child born in the new world. On the lawn next to the Lost Colony office building, there is a festival with games, a dunk tank, giant puppets, a bounce house, a rock climbing wall, costumed actors, jugglers and a lot more. The Elizabethan Gardens serves cake and ice cream at 1 p.m. It's a fun time under the live oaks of Fort Raleigh, and my kids really enjoyed it last year.

Fort Raleigh will have special Virginia Dare programs throughout the day. At 10 a.m. and 1 p.m., there's a program called The Birth and Baptism of Virginia Dare; at 11 a.m. and 2 p.m. is a program about Governor John White; and at noon and 3 p.m. it's "What Happened to Virginia Dare?"

If you're heading to Roanoke Island on Saturday for all these fun events, don't miss the new Fish and Wildlife Service Gateway Visitors Center that's just across the road from Fort Raleigh. It's a brand-new local attraction, and you should check it out if you're up that way. You should also try to stop by the Manteo Farmers Market in downtown Manteo. It's from 8 a.m. to noon.

It's a busy week on the Outer Banks. The beaches are packed, and the traffic is thick. You may notice an unusually high number of sportfishing boats around here this week too. The annual Pirates Cove Big Game Billfish Tournament is going on all week at Pirates Cove Marina in Manteo. Visitors are welcome to stop by the docks in the afternoon to check out the boats and see what was caught for the day.

There is a lot more going on this week! Check our By Day and Nightlife listings for a full rundown on all there is to do. Have fun out there and be safe!

This week you have a chance to win a $30 gift certificate to Kena Activewear and a one week family membership to the Outer Banks Family YMCA!

For more information about Kena Activewear, check out their website.

For more information about Mike Dianna's Grillroom, check out their website.