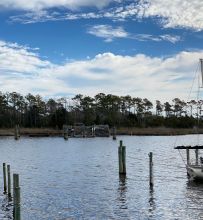 The Elizabeth II, the stately focal point of the Manteo waterfront, is gone from her berth, and the waterfront looks strangely naked.

On Tuesday, February 22, a crew of volunteers and staff of Roanoke Island Festival Park motored the representative 16th-century sailing ship down Roanoke Sound to be hauled out at Bayliss Boatworks in Wanchese for maintenance. Due to shoaling in Shallowbag Bay and Roanoke Sound, the ship had not left its dock for haul out since 2017. It was literally stuck in its harbor.

The 69-foot-long, 17-foot-wide square-rigged bark draws an astounding 8 feet. As a wooden-hulled ship, it needs to be hauled out annually for inspection and hull maintenance, so people were getting nervous that it hadn't been hauled out for so long. Last year the state and Town of Manteo found the funding for dredging, and 2.2 miles of Manteo channels have been dredged, which enabled the ship to at last motor out of Shallowbag Bay and head to Wanchese. The ship will receive a variety of hull repairs and is expected to return to the park in about three weeks. 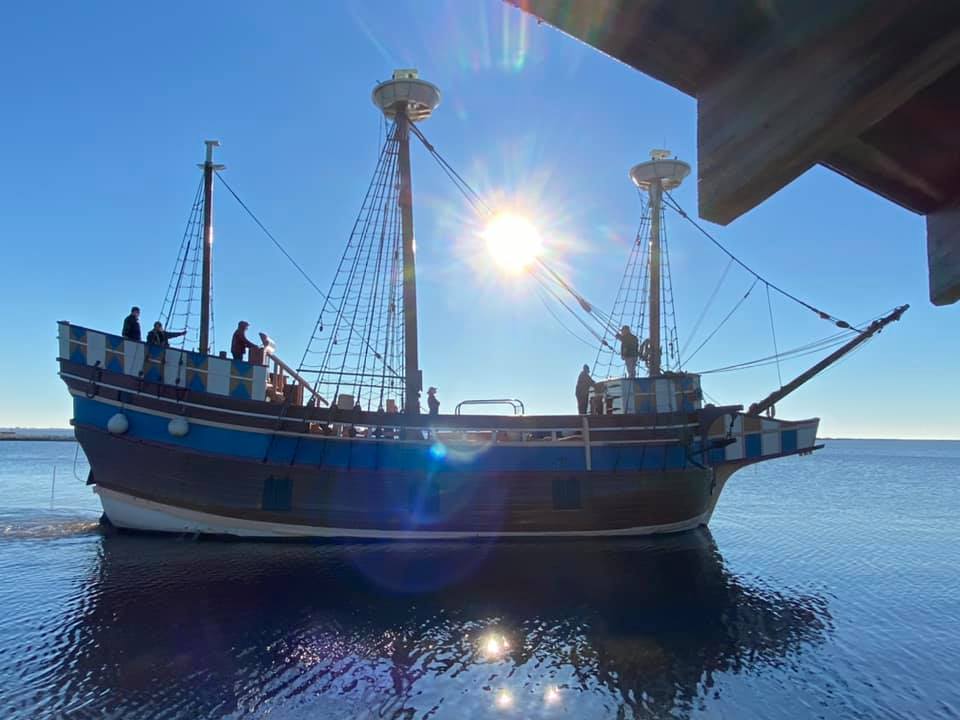 The Elizabeth II leaves her dock in Manteo on February 22, 2021, for the first time in more than three years. Photo, and one above, by Tod Clissold.

The Elizabeth II is a beloved feature of the Manteo waterfront, and its story goes all the way back to 1584. It's modeled after the Elizabeth, one of seven vessels used to carry the first English colonists to the New World. Sir Walter Raleigh sponsored three voyages to Roanoke Island between 1584 and 1587, and the Elizabeth was sailed to the New World in Raleigh’s second expedition in 1585. The 50-ton, cargo ship captained by Thomas Cavendish carried mariners, colonists and supplies to be used in establishing a military garrison. It took three months for the ship to sail here from England.

Fast forward almost 400 years, and America’s 400th Anniversary Committee was looking for ways to commemorate the anniversary of the Roanoke Voyages in 1984. Governor Jim Hunt of North Carolina had the idea to build a replica ship of one that brought the original English colonists. Since there were no plans available for such a replica, historical ship designer William Baker and naval architect Stanley Potter studied the merchant/cargo vessels of the time to build a representative ship. It was decided that the ship should be built and its home port should be on Roanoke Island, where the first English settlers initially landed. The ship would be built in the historic Manteo Davis/Creef Boathouse.

The only problem was that back then the Manteo waterfront was dilapidated and rundown, not at all like it is today. So, in the meantime, Manteo Mayor John Wilson, with the help State Senator Marc Basnight, Governor Hunt and many others, began the process of revitalizing the Manteo waterfront, and the state invested in the establishment of a site for the ship’s permanent home. 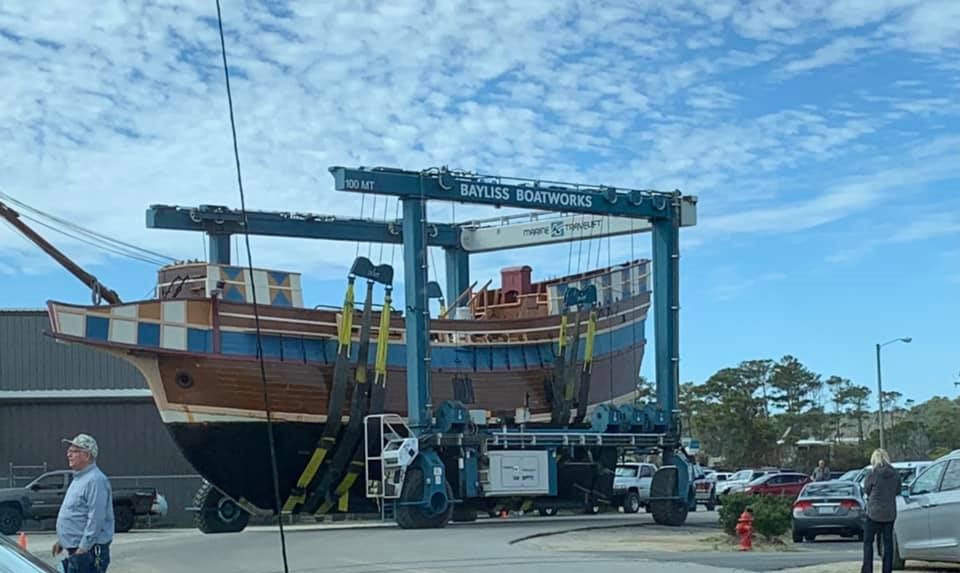 The Elizabeth II in the slings at Bayliss Boatworks in Wanchese. Photo by Terry Jordan.

Boat builder O. Lie-Neilsen began construction of the representative ship in July of 1982, and residents of Manteo and visitors from the beach enjoyed watching its progress. Lie-Nielsen made every effort to use 16th-century shipbuilding practices, including using hand tools like the adze and ax for the final framing, though modern techniques and power tools were also employed. It cost $650,000 to build and was launched on November 22, 1983, sliding down the rails into Shallowbag Bay to the cheers of people watching from boats and on the shore. It motored to its permanent home across the Dough’s Creek, where the state had developed facilities for visitors. Elizabeth II was publicly dedicated in a ceremony in Manteo in July 1984 as part of a three-day celebration to commemorate the arrival of the first English settlers on Roanoke Island and America’s 400th anniversary. Dignitaries at the event included Her Royal Highness Princess Anne of Great Britain and journalist Walter Cronkite.

Since then, the ship has been used as a teaching tool about the history of New World colonization. It is a permanent attraction at Roanoke Island Festival Park, where costumed interpreters share with visitors what life was like on board the ship. The boat is seaworthy, and prior to 2017 it sailed to nearby towns like Ocracoke, Edenton, New Bern and Beaufort so that school children and others could explore it and learn about its history. Now that the Manteo channels are dredged, it will do that again in the future.

A nonprofit group known as the Friends of Elizabeth II offers financial support for the park; becoming a member or donating to that group helps preserve the ship. Volunteers to help maintain the ship are needed year-round; volunteers can apply through the Roanoke Island Festival Park website. 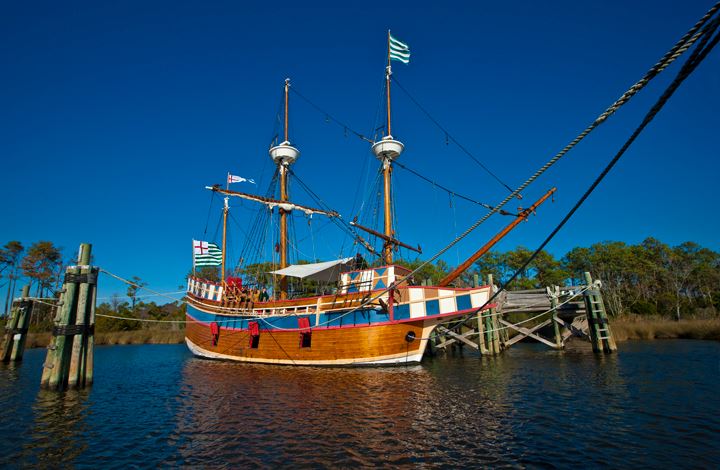 Elizabeth II in her usual place across from the Manteo waterfront. Photo courtesy Friends of the Elizabeth II.

If you’d like to know more about the Elizabeth II, this video is a good place to start. Roanoke Island Festival Park is currently closed for the winter, but it will reopen in March so you can visit the ship them. In addition to Elizabeth II, Roanoke Island Festival Park offers many other experiences, including American Indian Town, the Settlement Site, the Adventure Museum and a Museum Store. It's a great way to spend a day learning about America's history while having fun. 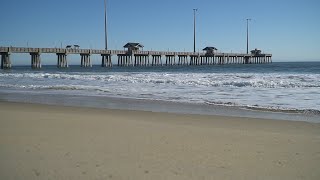