Thoughts On The Connection To Place, O'Keefe Graces OBX Stages and More! 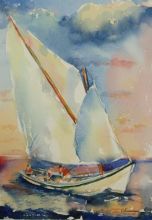 A few days ago I was scrolling leisurely through my seemingly endless Facebook newsfeed when a photograph posted by a friend stopped me in my tracks. In the photo, perched atop a peculiarly shaped mountain, a massive and brightly illuminated steel and neon star was silhouetted against a dramatic night sky. It was the Mill Mountain Star, the world's largest freestanding illuminated man-made star, shining its comforting light down upon Roanoke, Virginia, as it has since its construction in 1949. The photo's affect was unsettling, so unexpected and visceral, almost a physical ache. It was an image from my past. It was...Home.

Though I never technically resided in Roanoke, I lived within 25-40 miles of the city from the age of 13 until I left the area at 28. Roanoke was the only real city in the region, and during my high school and college years I went there whenever I could for whatever reason I could concoct, attending concerts, going to museums, catching foreign flicks at the Grandin Theatre and, sometimes, just hanging out. I even once storyboarded and shot a Super 8 film in downtown Roanoke for a Virginia Tech film class. I can remember navigating my way through unfamiliar Roanoke neighborhoods based on where I was in relation to fragmentary glimpses of the 88-foot tall Mill Mountain Star spied through trees and between buildings. 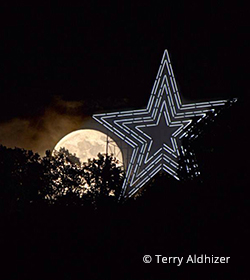 For whatever reason, I experienced a deep-seated connection with the city, the mountains encircling it and that ridiculously gigantic neon star. It always felt like home. The place left its mark on me, and I can still feel it after all these years.

It is the same sensation I feel when topping the Washington Baum Bridge on a clear, sunny day, looking out over Nags Head's narrow strip of sand to that glittering sliver of blue Atlantic curving ever so slightly, north to south, as it melds with the distant horizon fading away along the 36th parallel toward the east and the Strait of Gibraltar, a mere 3,824 miles away at the entrance of the Mediterranean Sea. It is a sense of serene connection to a place, of realizing that somehow the landscape has left its imprint on you, has become a part of you and that you now carry that connection, that sense of belonging, with you wherever else you may go. My fervent hope would be for each and every one of us to experience that realization at least once in life. As for me, I've been lucky enough to know it twice.

Spring's first First Friday greets us on Roanoke Island this Friday, April 4, with a variety of live music, an art opening and reception at the Dare County Arts Council featuring the watercolors of artist George Cheeseman and a plethora of special events, refreshments and sales hosted by Downtown Manteo's many other shops, galleries and restaurants, most of which will maintain extended hours during the event.

Accomplished local watercolorist George Cheeseman will be on hand Friday evening at the Dare County Arts Council in downtown Manteo for the opening of a solo exhibition of his vibrant and loosely rendered paintings. An opening reception will be held from 6 to 8 p.m. with music, light fare and libations. The exhibition and reception are free and open to the public. Cheeseman's work will be on display through April 28.

Ask the average person on the street the name of his or her favorite artist and the most common response (aside from their son's or daughter's work gracing the refrigerator) might well be Georgia O'Keeffe, a 20th-century artist whose work has come to personify American art in the minds of many. But success did not come easy for O'Keeffe. Discover the artist's artistic and personal struggles this weekend at any of three performances of O'Keeffe, a one-woman play written and performed by actress Lucinda McDermott and presented as part of the Don and Catharine Bryan Cultural Series. McDermott's two-act play premiered off Broadway and has been performed throughout the United States and in Bermuda and Mexico. Performances are scheduled for: Friday, April 4 at 7:30 p.m. at Roanoke Island Festival Park in Manteo; Saturday, April 5 at 7:30 p.m. at Hilton Garden Inn in Kitty Hawk; Sunday, April 6 at 3 p.m. at Cape Hatteras Secondary School in Buxton. Tickets are $15/person and can be purchased online at BrownPaperTickets.com and at the following local outlets: in Duck at Duck's Cottage Coffee & Books; in Kitty Hawk at Grays Department Store; in Nags Head at Sea Green Gallery; in Manteo at Duck's Cottage Downtown Books; in Avon at Koru Village; and in Buxton at Buxton Village Books. The Bryan Cultural Series is a nonprofit organization formed in 2012 dedicated to bringing a variety of high'-quality visual, literary and performing arts events to the Outer Banks.

Duck's Cottage Downtown Books in Manteo welcomes the first First Friday of Spring by also welcoming Dallas Quidley, Jr., author of The Lighthouse Keeper's Son, to a meet the author/booksigning event Friday from 5 to 7:30 p.m. The book is a chronological account of Quidley's life as the son of a lighthouse keeper in which he recalls his experiences and the history of his family in a timeline of anecdotes that is part history, part genealogy and part short story collection.

For 2014, Sanctuary Vineyards has moved their free concert series to the First Friday of each month. April's musical entertainment will be provided by Jug Tucker. Tastings are free, and wine will be available for purchase. The family-friendly event will run from 5:30 to 9:30 p.m., and you can bring your own picnic or snacks with you (sorry, no outside alcohol). Seating is limited at the winery (this show is indoors) so come early. Sanctuary Vineyards is located just a short drive across the bridge in Jarvisburg on the Currituck mainland.

It's A Green Thumb Thing

'Tis the season for diggin' in the dirt, and the Dare County Master Gardeners can help you find the right thing to plant in that dirt. Just attend the Dare County Extension Master Gardeners Spring Yard Sale on Saturday, April 5 from 8 a.m. to 12 p.m. at the Thomas A. Baum Senior Center at 300 Mustian Street in Kill Devil Hills. All proceeds from the sale support ongoing maintenance and construction in the Outer Banks Arboretum and Teaching Garden as well as other outreach programs. Admission is free.

Wanna find out what lurks below the tea-colored surface of the sound waters? Then gather up your water shoes or wading boots and sign up for the Saturday's free Sound Sampler program offered at 2 p.m. by the Outer Banks Center for Wildlife Education in Corolla. Using nets and traps, you'll get wet and dirty (cool, right?) discovering the diversity of Currituck Sound from insects to crabs and sport fish. To reserve your spot, call (252) 453-0221 ext. 1.

When the doors at Mike Dianna's Grill Room first swing open for dinner guests Wednesday evening at 5 p.m., it will represent something far more auspicious than simply the beginning of the 2014 season - it will mark the Corolla eatery's 10th year of serving Outer Banks visitors and locals. Given the vagaries of the restaurant business, with the effect of economic ups and downs coupled with customers' ever-changing tastes and expectations, to last 10 years in the industry is no small accomplishment. But to rack up 10 years of overcoming those inherent challenges with a seasonal establishment located on a glorified sandbar subject to unpredictable and sometimes destructive weather? Well, that's something bordering on extraordinary. Congrats from all of us here at OuterBanksThisWeek.com to all of you at Mike Dianna's!

This week you have a chance to win a one-night stay at Tranquil House Inn & dinner for two at 1587 Restaurant!

For more information about 1587 Restaurant check out their website.

For more information about Gray's Outer Banks check out their website.