Waves Welcomes Back The Roots

Not many villages with a year-round population of about 70 can bring in concerts from internationally famous acts. But the phenomenal water recreation, gorgeous Pamlico Sound setting and facilities at REAL Watersports make it a near common occurrence for the village of Waves. Don’t believe me? Just head there Friday night and ask the world-famous band The Roots for yourself.

Best known from The Tonight Show Starring Jimmy Fallon, hip-hop band The Roots proved that Waves could support a show-stopping entertainment venue when they performed at REAL Watersports last summer. Primarily, the resort has been regarded as a recreation destination for watersports professionals and enthusiasts from around the globe. For them, Hatteras Island is a mecca for kiteboarding, surfing, foiling and windsurfing, and the facilities, instructors and accommodations at REAL give them a spot to compete, play and relax.

It’s thanks to kiteboarding that REAL tapped into its potential as a music venue – a potential that turned out to be big enough to host internationally recognized acts. The first time they even offered live music was in 2006 at their first Wind Voyager Triple-S Invitational, a competition that’s come to be known as the crown jewel of wake-style kiteboarding. And over the years, the music aspect has grown to match that.

Why merge music with watersports? “We like to party,” Trip Forman, co-founder of REAL Watersports, laughs. One of the early Triple-S Invitationals brought in performances from The Dubplates, a Charleston-based band. The band members loved the island. One of them, Big Hair, also happened to run an entertainment production company. Since that initial event, Big Hair Productions has played an essential role in helping REAL book acts and put on music events. Through their collaboration, they launched the Sky Blue Summer Concert Series, sponsored by Carolina Brewery, Outer Beaches Realty, Quiksilver and Roxy. This lineup of 100-plus shows from March through November is hosted by REAL on their waterfront stage. The result is a water recreation destination and concert venue bringing in acts such as 2 Chainz, Mix Master Mike of the Beastie Boys, Kymani Marley, the Dubplates and yes, The Roots. 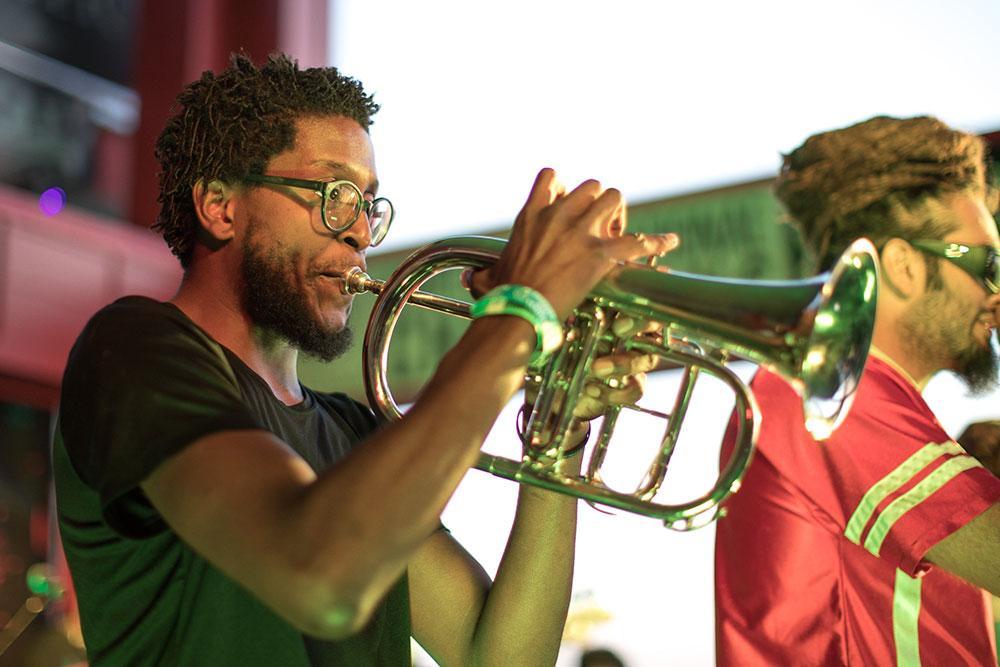 The Roots first came to Hatteras Island at last year's Triple-S Invitational. When it came to getting the band to agree to a show, “We were banging on their door that first year,” Trip says. “We were cold-calling as an unproven venue. And there are thousands of unproven venues, and you need a way to compete.”

It took time, but eventually the hip-hop artists agreed to the show. After making the deal, The Roots invited Trip, Matt (REAL’s other co-founder) and Big Hair up to meet them in New York City – on the set of The Tonight Show Starring Jimmy Fallon at NBC Studios. The invitation came with 24 hours of notice, and it took the guys by surprise. After getting the call, they left Waves at 6 a.m. the following morning and drove straight to New York City. Considering the months of trying to get the group’s attention, “That was the finish line,” Trip says.

While Hatteras Island is on the radar for watersports lovers, it wasn’t so much for The Roots. But when they first visited for the show in 2018, the beauty in this corner of the Outer Banks captivated them.

“They’re super cool, upbeat and positive guys,” Trip says, and the energy they brought to their concert electrified the audience. The explosive lights and rhythmic jams enveloped the audience, and the concert-goers were dancing, singing along or standing quiet in awe of the performance. “It was epic!” Trip recalls. “I kept walking around the whole night and taking it in from different angles.” 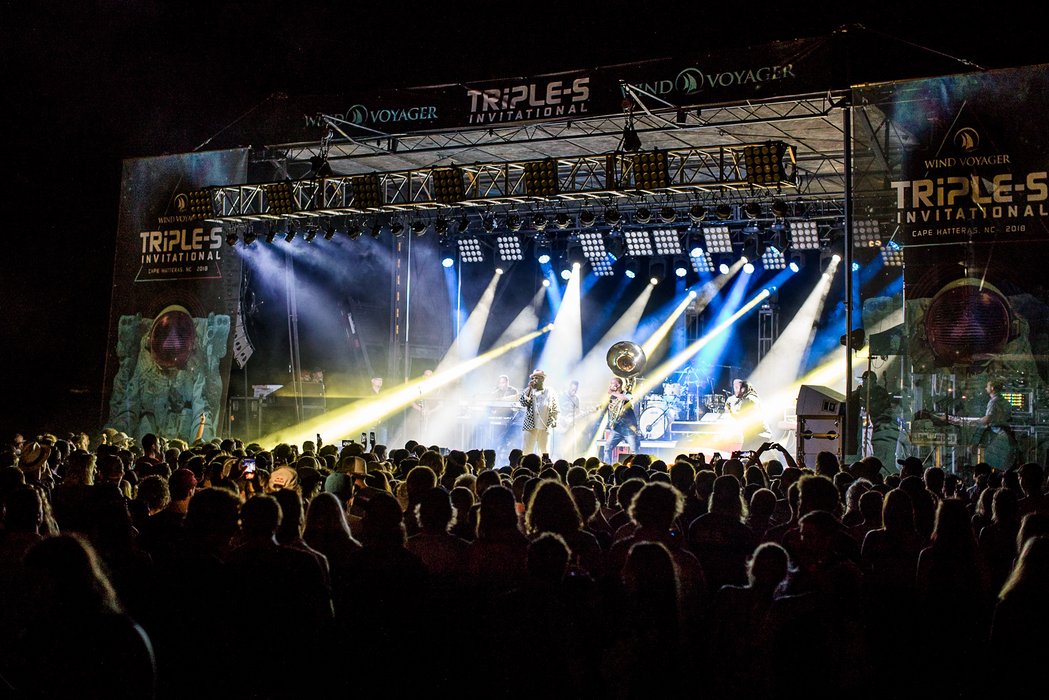 It was epic for The Roots too. They later described it as their favorite show of the year. Afterward, they stuck around to experience Hatteras Island’s recreational wonderland. As you do on Hatteras, they enthusiastically took advantage of the wealth of aquatic activities, each of them giving kiteboarding and surfing a go, and they stayed at the resort’s accommodations, Watermen's Retreat, right on the water.

While booking the band initially in 2018 took months of calls, hounding and persuasion, this year, The Roots “were literally calling and asking if they could book the show,” Trip says.

One may guess that kiteboarding sits at the heart of these concerts, but philanthropy sits at the real root of it. Ticket proceeds benefit the Hatteras Island Youth Education Fund (HIYEF). Through the last three Triple-S Invitationals, REAL raised $113,000. To Trip, “it’s a great way to take the energy and light from the Triple-S and these shows, and redirect it on the youth of Hatteras Island.”

The 2019 Triple-S runs from Saturday, June 1, through Friday, June 7, and each day’s competition ends with a concert. Tickets for The Roots are still available for purchase on the Triple-S Invitational website, and the proceeds from both events benefit the HIYEF. If you can’t make it to the show but still want to help the fund, you can make donations here.

The opportunity to see big-name bands in an intimate show at a cozy waterfront venue is a remarkable event for the Outer Banks. Take advantage of their contributions to Hatteras Island’s music scene by checking out our Nightlife calendar for Hatteras Island. And to learn more about the goings on around the rest of the Outer Banks, our complete Nightlife page guides you to music all summer long.