Captain Allan "Big Al" Foreman has 41 years of offshore fishing experience. He holds a masters license with unlimited tonnage. Captain Allan grew up in nearby Elizabeth City and spent his summers working on the Outer Banks. He was about 7 years-old when he first went inlet fishing with his grandfather. He started running charters in 1972 after graduating from college. As the former owner of Pirate's Cove Marina, Captain Allan's boat, the Crystal Dawn, was the first to fish out of what has grown into Pirate's Cove Yacht Club. He sold the marina in 1982 and kept the Crystal Dawn, which he ran from 1980-1984. The original Country Girl was a fifty footer licensed to carry 22 people. He built the current Country Girl in 1990 with the help of his father-in-law, boat building legend, Captain Buddy Cannady. He has run hundreds of gulf stream charters since 1975. He created the Crystal Dawn Corporation in 1977, which operates the Crystal Dawn and the Country Girl out of Pirate's Cove today. 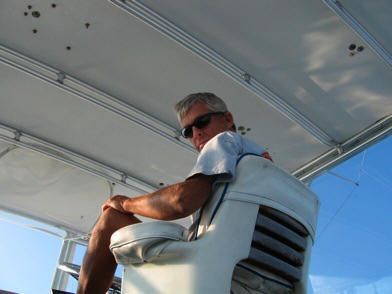 65-foot headboat powered with twin 6-T1 diesels, chartering out of Pirates Cove Marina. Room for 150 people, but limited to 50 for fishing-room and 100 for non-fishing cruises.