Wanchese Fishing ChartersDad and the kid versus the world

Dad and the Kid Versus the World 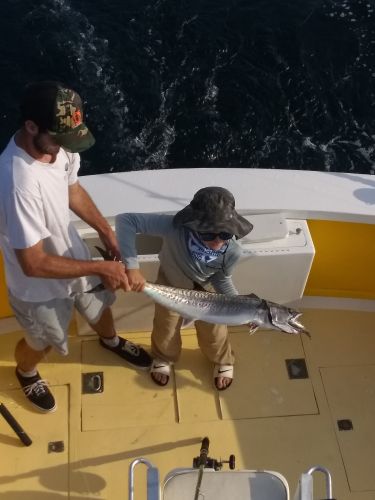 Thursday, June 27, 2019
Inshore from Oregon Inlet
Yesterday was such a wonderful day I had a boats party that book two boats one had two older kids on it and one had the dad in the son. So a little friendly competition was in order. After fishing for Bluefish and Spanish mackerel that we did not catch we decided to go out and try for something bigger which we got lucky and found. First seven-year-old called himself a 23-pound king mackerel then the dad called him one that was a little smaller needless to say it was a great catch for such a slow day. It's times like that it makes my job absolutely the greatest job in the world from the crew of the fishing Taxi tight lines give us a call let us take you fishing.
Click here for more activities from Wanchese Fishing Charters