OBX on the FlyDamp weather, but great fishing 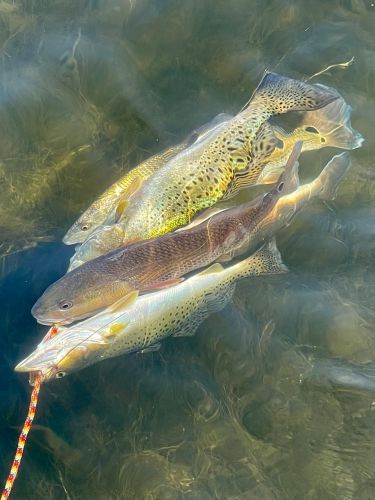 The week had plenty of rain, but the fish were pretty cooperative.  For those that choose to keep some fish there were nice speckled trout striper, sea mullet, and drum.  Many others were released, plus flounder, pin fish, and sheepshead.  Beach action has been productive to the south of Oregon Inlet with spanish, blues, sea mullet and some nice pompano.  Some scattered spanish and sea mullet to the north. The sound continues to produce nice drum, speckled trout, and flounder action. Near shore boats finding a few albies, spanish, blues and amberjacks. Off shore has produced many tuna, wahoo, and mahi.  Have you tried one of our one-of-a-kind electric powered kayak adventures?  We're able to get to much less pressured areas with little to no effort on your part. This means more quality fish for you.  Check out our instagram for more photos.

Click here for more activities from OBX on the Fly

OBX on the Fly