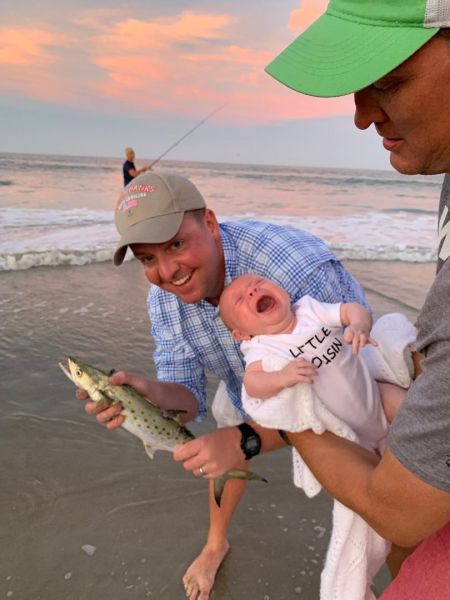 Happy Labor Day!! The fishing this week has not been to bad. Reports of some 17 to 18 inch blues hitting this morning and a big red. Fresh mullet has been the ticket along with blood worms and even shrimp. We have had some nice Spanish and mullet getting caught as well. The pier action so to speak has a mix bag with Nags Head doing the best this morning with flounder, Spanish, blues, mullet, spot and drum. Nearshore brought in a decent load of bluefish and Spanish while on the inside they were greeted with striper and trout. The offshore fleet was out and found few mahi, wahoo with blue marlin, white marlin and sailfish, so not a bad day on the water. The key was to get out early due to the storm. The rest of the week could be iffy.

Marc is in town and trying out his new measuring device, referring to the pic above. It does seem to be working well, however we do not sell them in the shop, you will have to make your own!! Thanks for the pictures we love to get them and the report Marc.Keep up the nice work.